The Good Muslim In Eternal Return 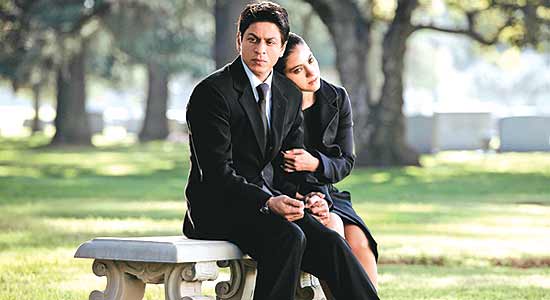 Bal Thackeray’s clampdown on My Name is Khan could prove to be a most erroneous political move. It might have forced sections of the audience to stay away but has only added to the significance of the film, a magnum opus on love, tolerance and acceptance. It has also blended reel and real roles for Shahrukh Khan in a manner that no scriptwriter could have ever been able to put on paper. It is not an exaggeration to say that this is SRK’s Mother India. Rizwan Khan, afflicted with Asperger Syndrome, pays a heavy personal price for his surname and hits the road to explain to the American president that his name is Khan and he is not a terrorist. Through this larger-than-life character, SRK stands up for the Muslims of the world and for Islam, a religion under fire post 9/11.

In recent times, one has seen a clutch of Bollywood films dealing with rising Islamophobia—the slick thriller New York, and the tortuous and convoluted Kurbaan. Karan Johar’s film keeps it straight and simple and wears its good heart on its sleeve. To go looking for a refined cinematic rendition of racial politics like Crash would be imprudent. What you have is a gentle, affecting and heart-warming film that makes you smile through your tears. It looks at contentious issues but offers overwhelming hope and renewal.

Rizwan says his prayers in public, wears his cap, derives his identity from his religion, but rises well above it.

To have a central character afflicted with Asperger Syndrome is a masterstroke. Here’s a man who can’t understand the complexities of the world but soaks in every little detail like a sponge, including the simple message from his mother (a nice return by Zarina Wahab) that all human beings are alike and the only difference between people is that they are either good or bad. Rizwan can’t express his deep thoughts and feelings but holds a mirror to the world most eloquently. He can repair anything but human beings. SRK is immensely endearing and draws you effortlessly into Rizwan’s world. There are some exceptional moments, like when he hides his face sheepishly on getting proposed to by Kajol (natural as always) or when he innocently wonders whether he was confined to a cell because he didn’t know anything about Al Qaida. It is hard not to get moved when he and Kajol grieve over a common loss, but in their own disparate ways, or when he remembers the loss of his “only best friend”.

Unlike New York, which cosmopolitanised Muslims, or Kurbaan, which played on stereotypical Muslim imagery to create an odd “us” vs “them” divide, mnik takes a more interesting way out. Rizwan says his prayers in public, wears his cap, derives his identity from his religion, but rises well above it.

The last one-fourth of the film gets unwieldy and heavy-handed. The portrayal of underprivileged black Americans is a bit too sanctimonious and there is an overt effort to pack in unnecessary drama. But the overall impact doesn’t quite diminish. mnik is unashamedly emotional cinema, cry good tears.