The good doctor erects defences of awareness against killer HIV 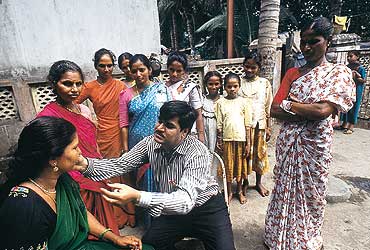 For sex workers in Andhra Pradesh’s coastal district of Visakhapatnam, Dr Kootikuppala Surya Rao occupies a divine pedestal. To fight a relentless though successful battle against the killer aids—by sticking to the prevention dictum when no cure is in sight—is a mountainous proposition to say the least. But for Rao, a general physician by training, it’s been a passion. Fame came to him when he started providing medicare for just Re 1.

He began by providing free counselling to truck drivers operating on NH4, linking Calcutta to Chennai, at ‘free tea parlours’ opened by him under the banner of Child Foundation of India, a voluntary organisation. Initially, the truck drivers were reluctant to answer Rao’s queries about their health. But soon their defences gave way to candour and they began speaking about their medical problems, mostly std and aids.

On an average, more than 5,000 trucks pass through the highway every day and Rao discovered the fact that 85 per cent of them suffered from some kind of sexual infection or the other. Says Rao: "Most drivers stop at dhabas on the highway, pick up sex workers and drop them at the next dhaba." His advice to them to take necessary precautions, like using condoms, helped—a sharp drop in std cases was discerned.

Rao is perhaps one of the few Indian doctors who’ve undergone a special training programme on the subject—‘Caring for aids’, from Manchester Infirmity in the UK. Says he: "Having seen a lot of poverty and superstition, I wanted to be a social worker with medical skills." Despite being encumbered by a sceptical family—lower middle-class peasants of Kintali village, from the backward Srikakulam district—he graduated from the Andhra Medical College, Visakhapatnam, did his post-graduation in family medicine from the Indian Medical Association College, Delhi, and then took another MD in community medicine from Calcutta. He started out as a private practitioner in the late ’70s charging just Re 1 for consultancy, besides distributing free medicines.

After his successful awareness campaign among truck drivers, Rao shifted focus to sex workers and street children. According to him, Andhra Pradesh ranks third in the country in terms of hiv positive patients with over 1.3 lakh cases having been identified in the recent past—the incidence having doubled during the past three years in Visakhapatnam itself, with a 30 per cent increase in std cases.

Rao and his battery of volunteers are now successfully conducting health camps in some of Visakhapatnam’s ‘red light’ areas, advising the sex workers to take necessary precautions. According to one of the beneficiaries, Lakshmi (not her real name), regular medical check-ups have helped her keep good health. Says she: "Now we’re well aware of the precautions and resist any sort of forcible act by our customers. Doctor has educated us how safe sex can help us live and work without any risk."

There are many others who acknowledge the good work being carried out by Rao. Admits 18-year-old Leela (not her real name): "I would’ve fallen prey to dreaded diseases as my clientele is large and most of them are foreign sailors who stop over for days together. When I insisted that they take the required precautions, they understood and behaved like human beings. Of course, there are a few who act like animals. I refuse point-blank to engage in sex with them."

Rao has studied aids among slum-dwellers and adolescent sex workers in Visakhapatnam. But most of his work is devoted to the 5 million-odd truckers in India. Rao ran three tea parlours for almost a year-and-a-half at inter-state borders to interact with this mobile, vulnerable population. But lack of funds soon smote him. Jeffrey Marck, an Australian expert on hiv among truckers who heard of Rao’s work at a Canberra seminar, has been trying to persuade a US truck-stop chain to set up such shops on Indian highways. He’s helped organise more than 300 tea parlours in the past few years.

Rao, however, has moved on. He’s now working with street children, especially adolescents, who, according to him, are highly vulnerable to sexually transmitted infection and aids.

The lonely fight against aids by Rao and those of his ilk, besides praise, deserves a bold and informed response from policymakers: that of marrying awareness campaigns with a decision to recognise ‘red light’ areas. If you want to assist Dr Rao in his efforts, he is available on 910981-558637 or Cell: 98481 86145.