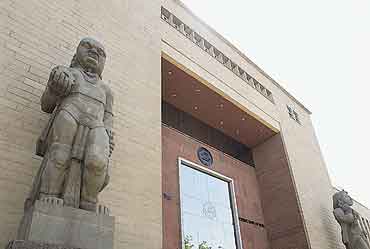 outlookindia.com
-0001-11-30T00:00:00+0553
It was a classic paradox. One that baffled economists, bullion experts and the Reserve Bank of India (RBI) for months. Since April this year, global gold prices had been moving northward. The summers and monsoons are generally lean periods for imports of the yellow metal into India. So, by all yardsticks, the demand should have been petering out during the April-August period. But surprisingly, several Indian traders were readying themselves to mop up the metal in the international marketplace. Why would they buy when the price is high and market low? This was enough to set off alarm bells at the central bank.

On October 1, the RBI clamped down on the $6.5-billion bullion trade, imposing severe restrictions on gold imports. Senior government officials contend that "we had no idea of who the Indian buyers were" and that the bullion policy was being misused. One of them went to the extent of saying that the trade was being used to launder black money. "So, we had to curb it," the official says. But that's not the way importers saw it. They say the RBI's strictures were meant to favour just one party: the Indian arm of the Canadian Scotiabank, one of the leading gold buyers which is said to account for a fourth of India's total annual gold imports (which was 450 tonnes in 2002).

Following the deregulation of the gold trade in the 1990s, the government nominated a few state-run agencies (MMTC, STC and PEC) and the RBI allowed some banks (Scotiabank, SBI and HSBC) to import gold in bulk to supply to Indian exporters who processed it. The 1997-2002 Exim policy introduced the Letter of Authority (LoA) concept, under which a trader/buyer only had to get a letter from one of the nominated agencies and open a Letter of Credit (LC) directly through a bank. The buyer didn't have to seek permission from the Union commerce ministry.

In effect, this opened the floodgates for third-party imports (now banned by the RBI through its October circular); a buyer could directly get gold although he had to ensure that the invoice was in the name of the agency that gave him the LoA. Subsequently, in May 2000, the RBI too okayed the LoA concept through one of its circulars. Finally, the 2002-07 Exim policy silently approved the concept. Everything went on smoothly. For buyers, it brought in greater efficiency without the hassles of dealing with a state-run agency and, for the agencies, it resulted in commissions without having to put in much work. And each party made a reasonable profit.

Things began to change this year. Suresh Hundia, president, Bombay Bullion Association, feels there was an "arbitrage potential" for traders. With global interest rates around 2-3 per cent, and the the domestic rates around 6, an intelligent trader could make a fortune. He just had to take a dollar loan, use it to import gold, sell the gold at a discount of 1 per cent to the market price, and still make a cool profit of 2-3 per cent. Since the rupee was appreciating against the dollar, he would have to hedge the potential loss on his dollar loan. But the forward cover rate has usually been a mere 0.5 per cent, or even less.

"Between April and September (the lean season), LCs worth Rs 3,600 crore had been opened by traders, mostly through the LoAs," contends Hundia. Banking sources add that several buyers, who had previously never dealt with gold (or any commodity, for that matter) entered the business to reap the easy arbitrage benefits. "We have names of several such firms, both big and small, who suddenly started buying gold in the past few months. They were opening LCs on their overseas offices," reveals a senior manager in a Delhi-headquartered bank that has the RBI approval to import gold.

All this had yet another effect.It started eating into the business of the RBI-approved banks that were involved in gold. Remember, it did not affect the operations of the state-run agencies because they still earned a small commission—market experts say it was 10 paise per Rs 1,000—from firms that were importing directly using the former's LoAs. The worst affected was Scotiabank which started its bullion business in India in 1997 and now operates in the six metros as well as smaller cities like Vishakapatnam, Coimbatore, Ahmedabad and Salem.

Banking sources in Mumbai say that it was a triple whammy for the Canadian bank. One, its business was hit due to low demand, thanks to the lean season and soaring global prices. Two, several traders were unwilling to import through it since they had to pay a much lower commission to state-run agencies while importing through the LoA route. As one trader puts it: "The new traders just did not want to go through Scotiabank, or any other that had been authorised by the RBI to deal in gold." Expectedly, Scotiabank hardly did any business in the three months prior to the RBI's October circular. Finally, to add to the drama, the Scotiabank group comprises several firms including ScotiaMocatta, a leading global trader in precious metals. Therefore, say the critics, their trading operations also got hit considering India is the largest consumer of gold, absorbing a fifth of world production.

That's when there came a twist in the tale. Apparently, Scotiabank told the RBI that the LoA policy was being misused. And the government needs to curb these practices. The RBI agreed and issued its October circular that banned trading through LoAs. However, traders and banks that open LCs for them don't quite agree with this logic. Explains a senior manager in a Delhi-based bank who deals with foreign exchange, "First, the RBI had no authority to issue the circular since the Exim policy comes under the purview of the commerce ministry and the director general of foreign trade. Second, the extent of malpractices has been highly exaggerated."

According to banks, which open LCs for several crores of rupees every day for gold buying, most of the traders were genuine ones who had been dealing with the yellow metal for a long time. One of them talked about the few clients he handles and says their genuine business has been affected because of the RBI circular. As Hundia points out, the ban on third- party imports would result in delays in imports due to the bureaucracy one has to deal with. It will also result in lower profits since the state-run agencies charge a much higher commission if the LCs have to be opened by them.

Critics, however, question the timing of the RBI decision. The three or four weeks prior to Diwali usually see hectic gold buying in India. Therefore, the ban on third-party imports ended up favouring the few RBI-accounted banks who had been hit by such imports. And that too during the peak demand period. Obviously, the biggest beneficiary would have been Scotiabank, given its huge share of the gold trade. Further credence to this theory comes from another fact: post-Diwali, the traders have found a loophole to wriggle around the RBI clampdown!

Bankers explain that now some traders are doling out cash to the state-run agencies and importing gold. The idea is still to take advantage of the arbitrage potential. But the pre-Diwali season has gone by and, during that period, many traders were unable to import due to the RBI curbs. Question is: did the RBI issue its circular in a hurry so that a few players could gain, or was it genuinely interested in weeding out the irregularities?