The Germination Of Insecurity

Reading Savarkar, the sourcebook of Hindutva, minus is 'collaborations' 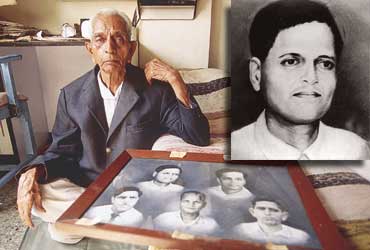 Savarkar And Hindutva—The Godse Connection
By A.G. Noorani
LeftWord Rs 295; Pages: 159
AG. Noorani’s book is primarily a response to the recent heroisation of Vinayak Damodar Savarkar by BJP leaders such as L.K. Advani who declared in May this year that Savarkar and G.S. Hedgewar, the founder of the RSS, "kindled fierce nationalistic spirit that contributed to India’s liberation". This is "a brazen falsehood", says Noorani who dwells at length on the cowardice of the author of The First War of Independence in his fight against the British. Savarkar never dared to use arms himself—he was responsible for the murders of Curzon Wylie and Collector A.M.T. Jackson but ordered some of his disciples to wield the pistol instead of himself. And once convicted of complicity and jailed in the Andamans, he pleaded for clemency in an "abject and demeaning" way.

To my mind, Noorani pays too much attention to Savarkar’s lack of courage in order to expose the shallowness of his nationalistic leanings. He could have highlighted more significant elements, such as his willingness to collaborate with the British in order to exert power at the provincial level—hence the participation of Hindu Sabhaites in the government of the Central Provinces and Bengal while the Congress had opted for the boycott of these institutions. And, more importantly, in order to militarise the Hindus by inducting them in the regular army and have them fight along with the British outside India. This militarisation plan was intended to give the Hindus the training and the arms they needed to struggle against the real enemy, the Muslims. Savarkar, the rss and the Hindu Mahasabha had not been actively involved in the freedom movement simply because their priority target was not British colonialism but Islam—even before the Muslim League asked for a separate state in 1940.

Noorani convincingly argues that there is a direct connection between Savarkar’s ideology of Hindutva, the murder of Mahatma Gandhi by Nathuram Godse, the rss, and those who took part in the demolition of the Babri Masjid—or approved of it—including BJP leaders who take part in the government of India today. Things which go without saying sometimes need to be repeated again and again to dispel lies and denigrations. I would have gone further, however, simply because the Hindutva movement has changed over the years, as evident from the citations of Savarkar’s writings that Noorani quotes in his book. For Savarkar, to become part of Hindustan was "a choice which our countrymen and our old kith and kin, the Bohras, Khojas, Memons and other Mohammedan and Christian communities are free to make". For him, the Hindus were all the more open to these groups as they were mostly made of converts. Today, things are different. Hindu nationalist leaders do not invite Muslims to join the Hindu fold any more: they try to eliminate them, either physically, like in Gujarat, or by repeating ad nauseam, "Go to Pakistan!" (something Savarkar could not say in the 1920-30s) or else, they can live as second-(or third- or fourth-) rate citizens. However, what Noorani suggests—though discreetly—is the repetition of a pattern: Savarkar initiated the Hindutva ideology in the 1920s in reaction to the threat he felt from the pan-Islamist dimension of the Khilafat movement and from the "jehad" Muslims had declared for converting Hindus en masse. About 80 years later, the Hindutva movement capitalises on the same sentiment of vulnerability vis-a-vis Muslim fundamentalists and justifies the massacre of Muslim citizens along the same lines: this is legitimate self-defence—or preventive war, to use George W. Bush’s terminology. The heart of the matter largely lies in the Hindu feeling of insecurity. Noorani’s book shares all the scholarly characteristics of a fully-researched work—sometimes citations and references are even too many. But two notations need to be corrected: "Savarkar was the first to propound the two-nation theory": he did it before Jinnah himself, certainly, but there was still another Hindu ideologue who had done it before: Bhai Parmanand who suggested the partition of Punjab in the early years of the 20th century in order to save the Hindu minority from the Muslim majority in the province. Secondly, it is very debatable that the Hindu Mahasabha "emerged as an important player in Indian politics" at any point of time. It acted as a lobby within the Congress party as long as Hindu traditionalists such as Madan Mohan Malaviya were part of it. But once the Congress leaders ruled out the dual membership of Hindu Sabhaites who were also part of the Congress, the Hindu Mahasabha lost most of its influence. That was precisely the time when Savarkar took over from the Mahasabha in 1937.

(Christophe Jaffrelot is the director of the Paris-based institute of social sciences, ceri. He is the author of The Hindu Right and more recently, The BJP and the Compulsions of Politics in India.)