The Gen(i)e Is Out Again

The cultivation of Bt cotton, a genetically modified seed, in Gujarat opens an old can of worms 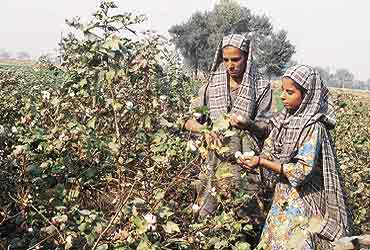 outlookindia.com
-0001-11-30T00:00:00+0553
When news washed up last week about farmers in Gujarat farming Bt cotton 'on the sly', it again fanned the smouldering debate over genetically modified (GM) crops. The government is still wondering whether to burn down the illegally grown Bt cotton on some 10,000 acres of farmland in the state. But it won't be easy as the crop is valued at crores of rupees and the Gujarat government is unlikely to antagonise the farmers.

It all began earlier this month when Mumbai-based Mahyco, India's biggest seed company and the sole applicant for permission to sell GM cotton seeds in India, confirmed its suspicions about the sale of illegal GM cotton seeds in Gujarat. Raju Barwale, MD of Mahyco, shot off a letter to the Union government's department of biotechnology (dbt) and other authorities concerned demanding punitive action against the offender. The dbt's Genetic Engineering Approval Committee (geac) in turn asked the Gujarat government to burn the crop. Experts, however, believe that by the time the government makes up its mind on the issue, there will be no crop to speak of—farmers have already started picking it and selling it off.

Seed business being what it is—secretive, cut-throat and unscrupulous—the clandestine supply of the as-yet-disallowed genetically engineered Bt cotton seeds doesn't come as a surprise. What is intriguing, however, is that the Ahmedabad-based company Navbharat Seeds, run by seed-breeder D.B. Desai, has freely sold these seeds for the past three crop seasons since 1998 and nobody—rival seed companies, scientists, anti-GM activists, government officials—smelled a rat!

Pushp Bhargava, eminent molecular biologist and a campaigner for a cautious release of GM crops into our fields, doesn't find this surprising at all. "In fact, I've evidence to suggest that many of the cotton farmer suicides in Andhra in 1998 were partly because of the failure of Bt cotton sold clandestinely by Monsanto. The problem is even if we know, there is no autonomous laboratory which can confirm our suspicions. It was found out this time because Mahyco has a vested interest in it."

The seed in question, Navbharat 151, appears to be a variant of the genetically altered Bt cotton created by inserting a gene from Bacillus thuringiensis (Bt), a naturally-occurring soil bacterium, so that the plant produces Bt toxins which kill bollworms. The seed was being supplied openly after it was registered with the Gujarat agriculture department in 1998. Though the seed packets are no longer available, farmers say the seed was priced at Rs 550 per 450 gm but was actually sold for Rs 800-1,200 in the black market because of its demand. Regular hybrids cost Rs 200-250 for the same quantity. The company also claimed a yield of 22 quintals per acre against an average yield of six quintals per acre for home-grown hybrids.

Another salient characteristic of the seed was its early maturity: 140-150 days as compared to 170-200 days for regular hybrids. The short maturity period would, claimed the company, enable the farmer to go in for another crop during winter once the cotton was picked. Most importantly, of course, the seed claimed to be resistant to bollworm.

Industry watchers find it hard to believe that Mahyco wasn't aware of illegal selling of Bt cotton seeds. Says a consultant to the Gujarat State Seed Producers Association, insisting on anonymity: "It wasn't in its interest to draw undue attention to Navbharat Seed's improprieties as the mnc couldn't have claimed infringement of its patent right in India which is yet to pass the Plant Variety Protection Bill.This incident is likely to further delay their entry into India."

Be that as it may, experts worry that as many as 10,000-13,000 acres may have been sown with Bt cotton in Gujarat alone. And if suggestions of the seed having been sold in Maharashtra and Andhra Pradesh are true, the area covered could be appreciably larger. Protagonists of Bt cotton are already chastising the government for robbing the farmer by not hastening its commercialisation. Conversely, wide use may also mean a serious engagement with the risks posed by GM crops.

Although GM cotton is commercially grown in the US, China, Argentina, Australia and Mexico, it doesn't necessarily mean that India should follow suit. In fact, the EU has a three-year moratorium on GM crops.

The Bt cotton debate in particular and the GM controversy in general have been vexed by claims and counter-claims. Proponents of Bt cotton argue that in India where insects eat up 50 per cent of cotton yield, where 70 per cent of all pesticide use is in cotton and where pesticides make up 50 per cent of production cost in cotton, Bt cotton could greatly benefit cotton farmers.

Critics of Bt cotton disagree. Argues Devinder Sharma, food and trade policy analyst: "The pesticides industry and the agricultural scientific community have made us believe that spraying of still more potent chemicals was the only answer. The result is that the worm has developed resistance to all kinds of chemical and pesticide cocktails. We're now being told that GM cotton is the only solution to the growing menace of pesticide-resistance. What will happen when the insect develops resistance to the Bt cotton? Will we introduce scorpion genes into the plant then, as has been done in maize in America?"