The Genesis Of Terror 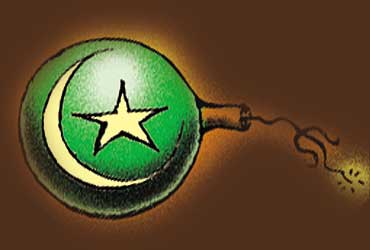 outlookindia.com
-0001-11-30T00:00:00+0553
During his Mumbai visit to console the relatives of the victims of Monday's two terrorist attacks, L.K. Advani was unable to resist the temptation of pointing the finger of blame at Pakistan. "I would say that our neighbour's war of terrorism against us is directed not only at Jammu and Kashmir .... (but) is an attempt to destabilise the whole of India." This could be true. But the time has come for Indian leaders, particularly those of the BJP, to stop sheltering behind the convenient excuse that Pakistan provides them with, and admit that they are themselves largely responsible for the wave of terrorism that is slowly gathering force in Maharashtra and Gujarat.

Immediately after the blasts, intelligence officials in Mumbai broke their silence and put the blame squarely on the Gujarat riots. They were, of course, immediately silenced. But their outburst confirmed what many of us already suspected. That the five bomb blasts in Maharashtra that preceded Monday's outrages and the fidayeen attack on the Akshardham temple in Gandhinagar last year were carried out by a new group of hate-filled Muslim youth recruited from among the victims of the Gujarat riots. The evidence is voluminous and keeps growing.

Last month the army unearthed documents in the terrorist redoubt of Hilkaka in Kashmir that showed that at least 40 Gujarati youth had been recruited by the Lashkar-e-Toiba and sent there for training in terrorist operations. Imran Rehman Khan, who is implicated in an earlier bombing and was captured by the Maharashtra police a few weeks ago, has confessed that the Lashkar has been recruiting terrorists not only in India but from among Indian Muslims working in the Gulf and Saudi Arabia. The cited purpose is to take revenge for the killings in Gujarat. One of the two assassins at Akshardham was carrying a note which claimed explicitly that the killings at the temple were in reprisal for the massacre of Muslims in Gujarat after the Godhra outrage.

The Lashkar's involvement in this new wave of terrorism is hardly surprising. In all probability, the Jaish-e-Mohammad is a party to it too. But inferring from this that Pakistan is behind the attacks is a far stretch indeed. The Pakistani government does have an ambiguous relationship with both these organisations. It is by no means unhappy that they are active in Kashmir. Elements in the isi may well be providing them with covert support. But only those utterly crazed with hate would want to create a situation in India that would threaten it with civil war, bring a violently Hindu chauvinist government to power and almost certainly lead, sooner or later, to a war with Pakistan. General Musharraf may be many things, but crazy he is not.

The truth is that the Lashkar and Jaish would not be able to find recruits, and the outlawed SIMI would not be able to expand its membership, if Indian Muslims, and Muslim youth in particular, had not been labouring under a monumental feeling of injustice and a growing belief that they have no future in this country. If they also have no other country to which they can escape, a mindless, destructive rage is the only safety valve that remains. In effect, what the new breed of terrorists is saying is that if we are denied a future we will see to it that the Hindus do not have one too.

Alienation—the sense of not being allowed to belong—is not entirely new to Indian Muslims. It began with the politicisation of the Babri Masjid issue by the Sangh parivar in the late '80s. The communal hate campaign unleashed by the vhp and Bajrang Dal halted the successful re-integration of Muslims into the Indian mainstream that had been Nehru's grandest legacy to this country.

But it was Narendra Modi's heartless stoking of Hindu communal passions after Godhra, at a time when a thousand families had lost their loved ones and ten thousand more their homes and businesses, that pushed a significant number of young Muslims over the brink of sanity into the abyss of rage. Modi made sure that the Gujarat police could not make preventive arrests to ward off the possibility of riots. When the killing began, he deliberately delayed the deployment of the army; dismissed the murders of Ehsan Jaffri and his family as their own fault; rewarded police and administration officers who protected Muslims with punitive transfers; skimped on providing relief to Muslim victims of the riots; and finally branded all Muslims as traitors, on the road to his electoral victory in Gujarat. Modi broke the most sacred canon of statecraft—that a state that wishes to command the loyalty of its subjects must above all be a just state. What was worse, the BJP and 23 other supposedly secular parties belonging to the NDA government at the Centre tacitly acquiesced in what he was doing.

For over 15 years the Sangh parivar has sown the wind. Now India has begun to reap the whirlwind. In the coming years the central and state governments will have to tackle this new breed of terrorists. The task will not be easy and cannot be done with kid gloves. But they will do well to remember that reliance on force alone will only feed the rage that lies behind the terror. Only the restoration of a just society, in which Muslims once more believe that they have a future, will douse that rage.