The Gavel Holds Up Democracy

The supreme court deals the Sirisena-Rajapaksa duo a blow 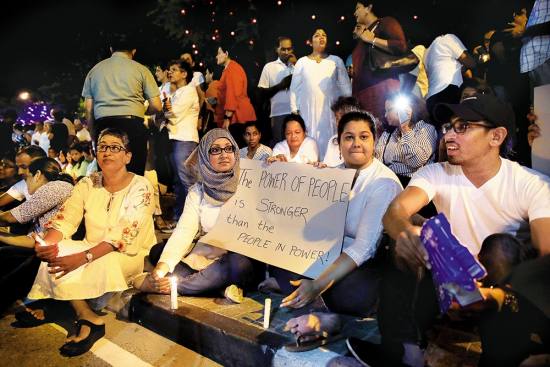 Until Tuesday, political deve­lop­me­nts in Sri Lanka had been moving according to a script that would have met Mahinda Raja­paksa’s approval. But the Supr­eme Court’s ruling late in the afternoon, restoring the dissolved par­­­­lia­­ment and putting an end to plans for fresh parliamentary polls slated for January 5, seems to have spoilt the plot.

The apex court’s ruling means that parliament is likely to be restored soon. But it is not clear which of the two PMs—Ranil Wickremesinghe or his repl­acement, Rajapaksa, will be called to face the trust of the House.

President Maithripala Sirisena had on October 26 dismissed Wickremesinghe and appointed Rajapaksa in his place, plunging the nation into a political crisis. But though the latter formed a cabinet, his MPs could not get enough support from others to form a government and face a floor test. At this, Sirisena dissolved parliament last week, ringing the bell for fresh polls. Since Wickremesinghe is now claiming that the court order also questions his dismissal, it was for the speaker of parliament, Karu Jayasuriya, to decide which of the two leaders will be asked to prove his majority.

The ruling treads on uncharted territory, as it questions the president’s power to dismiss the PM and appoint a new one. The grey area in law and different interpretations could again set in motion another chaotic and violent phase in Sri Lanka’s political theatre.

A three-judge bench headed by chief justice of the apex court, Nalin Perera, heard the series of petitions filed before him against the dissolution of parliament and ruled for its immediate restoration. Interestingly, Sirisena, as president, appointed Perera last month.

Significantly, as various alignments continue to unravel among...