The Gates Of Hades Flung Open

Giving children of sex workers a new life requires guts. Here is someone willing to fight for it. 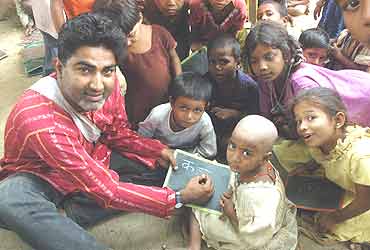 outlookindia.com
-0001-11-30T00:00:00+0553
Ajeet Singh can still recall vividly—as a young student at Delhi’s Hansraj College, he was besieged by an urge to do something meaningful. On one occasion, he was at a cousin’s wedding. A dancer hired to perform there was at her vulgar best. The crowd jeered to egg her on. Perturbed by the experience, he later learnt that she had a daughter. Sleep was far away that night. Singh lay thinking about the fate of the little girl. The next morning, he promptly marched up to her house and tried to persuade her to let him adopt the child. "I wanted to keep the child far away from the world she was born in."

Singh ran up against a mixture of incredulity and hostility. Being born to a commercial sex worker (CSW) has its stigma—you’re an outcast. The girl child, it is presumed, will follow her mother’s footsteps and the male will become a petty criminal/pimp. Why was Singh, the son of a respectable family, dabbling in their affairs?

The dancer was even advised by her clients not to give away her child. Singh’s parents too thought their son was mad. His relatives imagined he had some evil designs. Much to the annoyance of his parents, Singh got the child home and helped her with clothes and other necessities. He also admitted her to a nearby school. But within a few months, the mother came and took her child away.

Singh realised his mistake. Adopting children was not going to be easy. Also, singular acts of bravado or flashes of magnanimity weren’t the answer. He needed an organised set-up and it had to exist in a cooperative bond with the mothers, not snatch away their babies. In 1993 he began Gudiya, a non-formal education centre for the children of csws in the vicinity of Shivdaspur, the infamous red light area of Varanasi. "The idea was to reach out to the women, talk to them and their children and motivate both towards a healthier future." Children from the age of three attend the school, which supplements its basic curriculum with vocational training. But it’s been tough. Raised in a disadvantaged environment without a father figure, many kids suffer serious psychological problems. "It requires a lot of patience to change them," he admits. When first admitted, many are indisciplined. Some of them are extremely abusive. Gudiya aims at restoring their lost childhood.

Currently Gudiya has over 100 children under its care. "These kids have grown on me, my life revolves around their betterment," Singh says. Apart from him, there are three other teachers who help at the school. Often, the mothers also drop in to check on their children.

Gudiya also ensures that these kids are accepted by society. Hence, once they’ve learnt the basics, Gudiya admits them into mainstream schools. "Very often these children make it to good schools. Once admitted, the healing begins and they learn to feel a part of the normal world." Children who do not make it to mainstream schools have the option to learn music, dramatics or art. They also learn tailoring and handicrafts. In fact, every year there is a sale of products made by them. This earns revenue for the organisation. Gudiya is also funded by ActionAid.

Despite his resolve, Singh faces threats from the police, pimps and the mafia who control the sex trade. They also come in the way of these children seeking normal lives. "These people pressurise sex workers to withdraw the children from schools—the idea being to ensure that they too join the flesh trade. They don’t like to see anyone break away." However, Singh is undaunted. He believes that education is the only way these children can break free from their sordid world.