The Gates Are Open

The ban on the JuD has been a farce. It's business as usual. 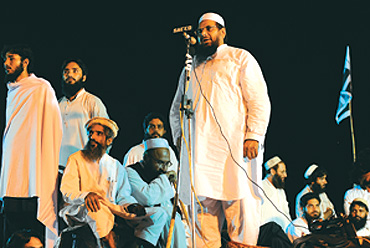 Outside the Markaz, dozens of gun-toting JuD activists stand guard, belying claims that it’s only an educational and medical centre (it houses several schools, colleges and a hospital). The Markaz bustles with activity, and there isn’t a policeman either inside or outside the complex. Away from Muridke, the JuD still continues to run—without any restrictions—its 150 healthcare centres, 10 hospitals, 300 schools and 510 madrassas countrywide.

It was in the second week of December that the government launched a crackdown on the JuD, detaining among others its chief Prof Hafiz Mohammed Saeed and Lashkar operations chief Zakiur Rehman Lakhvi. A month later, the crackdown appears to have come to a halt. In fact, three days after Saeed was placed under house arrest, he was allowed to leave his Johar Town residence in Lahore to offer Friday prayers in a nearby mosque. And though his movement has been restricted now, he hasn’t yet been chargesheeted and is free to see his colleagues.