The Gandhi In The Opposition

A biography of Feroze Gandhi brings to life a fiery parliamentarian 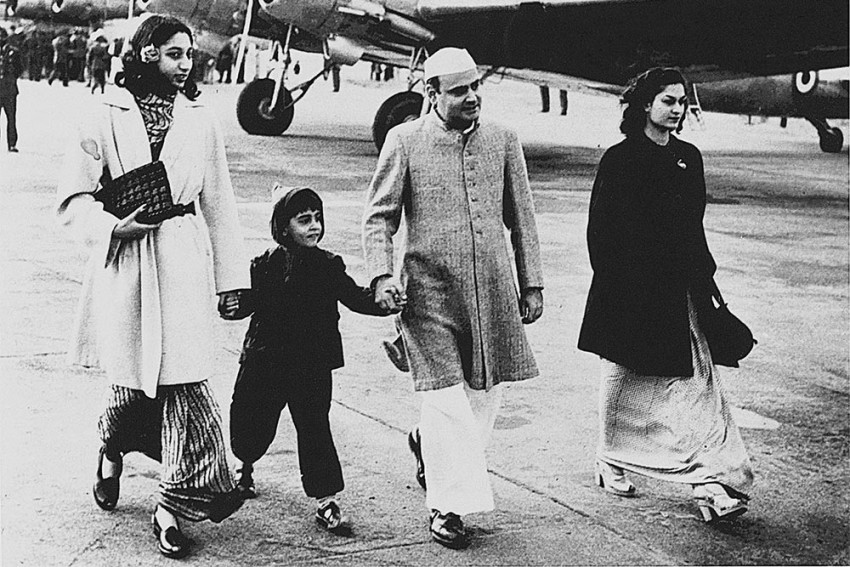 On Track CM
Feroze Gandhi with a young Rajiv and others at New Delhi’s Palam airport
Courtesy: Roli Books
Bertil Falk September 29, 2016 00:00 IST The Gandhi In The Opposition 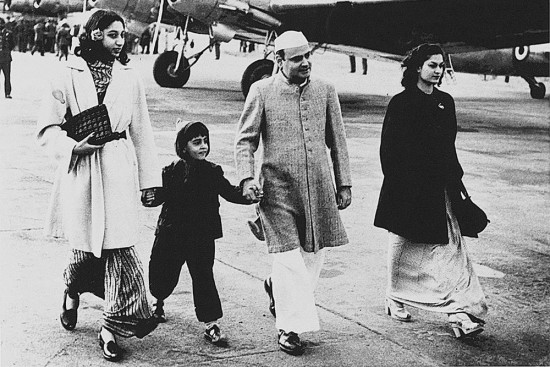 The following peep behind the scene of the Mundhra case is based on an on-camera interview with H.C. Heda on September 15, 1993. The Mundhra case is famous in Indian political history, and when (and if) Feroze Gandhi nowadays is remembered in political circles, it is often for his contribution to this affair.

Heda said: “In 1950 and up to Feroze’s death in 1960, there was a big gap in Parliament. There was no proper opposition to the Congress. Things were not coming out. The government leaders, they were so big that they could do anything. Take, for example, the stalwarts of those days—Jawaharlal Nehru, Sardar Vallabhbhai Patel, Govind Ballabh Pant, Morarji Desai. The lack of opposition was filled by Feroze in different ways.

He continued, “For example, Shyama Pra­­sad Mukherjee was there. He was a great opposition leader, but he did not come acr­oss as such. He didn’t have that investigating knack that Feroze had. And he (Feroze) was going into details, creating data, putting in hard work. That was needed. Mere knowledge is not enough. You are not giving sermons. You are trying to expose certain things....

“Feroze had great sympathy for the downtrodden. He had a golden heart. At the same time, he was very intelligent, a great obs­erver. And, by nature, he was helpful.... Plus, he was very popular. He attracted me most because he was playing the great role of unofficial opposition leader. And there I tried to help him. Certain gaps I could fill.”

H.C. Heda gives an example. The seating arrangements in the Lok Sabha were such that Heda’s and Feroze Gandhi’s seats were near each other, across an aisle. It was question hour and MPs put questions to the Union finance minister. One of them was Ram Subhag Singh, who put a question to TTK—as finance minister Tiruvellore Thattai  Krishn­a­machari was called—about the purchase of shares from Mundhra’s concerns. Heda remembers that from his seat, Feroze could see TTK from behind. When Ram Subhag Singh questioned him, Feroze Gandhi saw that TTK’s legs began to shake.

Feroze Gandhi (to Heda): Why are TTK’s legs shaking?

H.C. Heda: I can’t see his legs, but it could be that this is a deal where something has happened.

Feroze: Some scandal is there. Let us take interest!

“So Feroze put a question and I put in a question too,” Heda remembered.

Now, the matter took a new turn, because the media had noticed the questions asked in Parliament and there were speculations about the deal and Mundhra, although no wrongdoing had been established. But the air was rife with suspicion.

While the drama unfolded in Parliament, in the full glare of the media, other strange things happened. One evening around six, as Heda sat in his dining room, the door opened and a person burst in. He said ‘namaste’. Heda could not recognise him.

The visitor: I’m Haridas Mundhra. I know you’re surprised and you should be. I know you’re a friend of Feroze Gandhi. I also know you’re a friend of TTK. But I’ve come to you to convey to TTK only this much that nothing will happen to me.... Mundhra is an honest man. I want to save him. Therefore, if he wants any help from me, I can do it, giving information, filling the gaps. And so far as Feroze Gandhi is concerned, you can tell him that he can do nothing to me. He cannot harm me, though generally, all over the nation, the imp­ression is that I’m the culprit. But you don’t believe me.

H.C. Heda: It’s not a question of believing or not. I’m happy that you’re frank. But why do you come to me?

Mundhra: I’ve come to you only because I want you to go to TTK and tell him that I’m able to help him, if he wants any help from me. I’m ready.

Heda (on the spur of the moment): Can you buy those shares back?

Mundhra: Yes, but it will take time.

Mundhra: But you ask TTK whether he is prepared to sell the shares back.

Heda: I’ll convey the matter to TTK. I will call you around 10 o’clock.

Mundhra: When will you go to him?

Heda: I’ll call him at eight o’clock. I know that he doesn’t sleep bef­ore three. So we have a lot of time. I will drive there when he’s free, but I’ll phone him at eight.

TTK was at home at eight. Heda went and told him what had happened, except the matter about the purchase of the shares, because that had been Heda’s idea and not Mundhra’s.

TTK: What will Mundhra do if he wants to help me? Will he give me details of all his liquid assets?

Heda: Why do you want to find out about his liquid ass­ets? I can ask him about his assets, but why?

TTK: I want to find out how many crores of liquid assets he’s got.

Heda: I will give him your reply.

Heda returned home around nine o’clock. Mundhra called and Heda told him what TTK had said. Mundhra said that he would give information about his liquid assets, but he could not prove it immediately.

“Still, I have about Rs 60 lakh worth of assets with me. The rest I can give you within 48 hours, because I have to get them from Bombay and Calcutta. They are in the locker. I have to tell them where the key is and all that. And I don’t remember what thing is kept where,” said Mundhra. “All right,” replied Heda.

Next day, around nine in the morning, Mundhra ret­urned. He showed Heda the sha­res and said: “This is the list. If you want you can keep it.” Heda replied, “I don’t want to keep it, I’ll take it to TTK.”

Feroze Gandhi: I know you’re a friend of TTK too, but I’ve full faith in you. Don’t worry about it. I’m not asking you about your opinion of TTK. I’m bothered about a telegram that Mundhra received in Calcutta just before the purchase of the shares. I’m not able to understand it.

Feroze: I’m not satisfied with your interpretation. Who is the man who gave this illusion?

Heda: His name is Sogani.

Feroze: You know him?

Heda: I can arrange it.

A meeting was arranged between Sogani, who was Mundhra’s man, Feroze and H.C. Heda and his wife. Now, Feroze cross-examined Sogani.

When it became obvious that TTK had to go, Nehru was very annoyed. Seeing Nehru so unhappy, Feroze told Heda he wanted to save TTK, but it was too late.

H.C. Heda recalled: “Sogani’s interpretation did not tally with mine. My interpretation was that the shares had been purchased and sold. The same shares had been sold at one place and at another place—and that meant manipulation. I had the impression that it must have happened this way. What I guessed was a fact, but Sogani couldn’t accept it because he was Mundhra’s man. But TTK was innocent and I told Feroze that TTK was not involved in the purchase, but Feroze thought he was.”

We have, thanks to Heda, peeped into these behind-the-scenes events. When, ultimately, Feroze Gandhi dem­anded an inquiry into the questionable transactions, TTK, feeling the mood of the Lok Sabha and the strong pressure from Congress members, agreed to a probe.

“Later on, I took up the question with TTK about buying back the shares from Mundhra, but TTK, who was very arrogant, was self-righteous. He said, ‘No, no, I’ve done nothing wrong. Why should I?’,” Heda said.

The finance secretary, H.M. Patel, had brought up the issue with TTK before the deal and when TTK, more or less in passing, said that “if the LIC is interested they can look into it”, Patel took it as meaning “go ahead, buy shares”. From that point of view, TTK was innocent.

It was TTK’s principal secretary who bought the shares on the flimsy assumption that TTK had given the deal his blessing, or whatever hidden reason Patel may have had. Anyhow, the commission under Justice Chagla met in Bombay. Feroze Gandhi was the first witness under oath.

Justice Chagla had a very good reputation. And when the enquiry was over and the result made public, his conclusion was: “In my opinion, in any case, it is clear that constitutionally, the minister is responsible for the action taken by his secretary with regard to this transaction. It is clear that a minister must take the responsibility for actions done by his subordinates. He cannot take shelter behind them, nor can he disown their action.”

As far as TTK was concerned, that settled the matter. He had no choice. When it became obvious that TTK had to go, Nehru was very annoyed. Seeing that,  Feroze was also unhappy and said to Heda that he wanted to save TTK, but it was too late. TTK tendered his resignation and Nehru allowed him to resign in 1958. (In 1962 he returned to the cabinet, but not as finance minister.)

Bali Ram Bhagat, who was a deputy finance minister, said to me in August 1998: “When an inquiry was dem­anded in the Mundhra case, TTK discussed it with me. I said that whatever the facts are, he should talk with Feroze Gandhi. It was a bad investment, but anybody can make a bad investment. TTK had nothing to hide and he accepted the inquiry and as a result half a dozen senior officers, including the finance minister himself, resigned. And Feroze said in the Lok Sabha that Bali Ram was the only one who had the right answer and survived the fin­ancial shipwreck. Nehru himself took charge of the fin­ance ministry. That was how Feroze Gandhi became a household name.”

The Mundhra Scam: Life Insurance Corporation was pressured into buying shares worth Rs 1.25 crore of six dubious firms in 1957. It lost most of the money.

Haridas Mundhra: Calcutta based industrialist/speculator who was sentenced to 22 years in prison.