The Game Drags On

The big boys demur, the money's bad, the players get stale. Where's the ticket out? 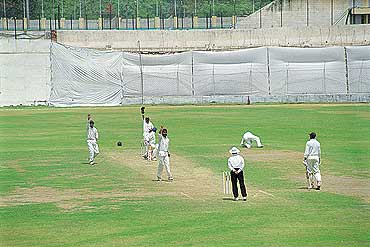 outlookindia.com
-0001-11-30T00:00:00+0553
Last month, when Sachin Tendulkar made himself available for an Irani trophy match from September 18-22, it was after a two-year hiatus. In fact, he's not much for home games, having played just two on an average in his 15 years of first-class cricket.

This year, he even excused himself from the 45-player camp organised by the Mumbai Cricket Association (MCA) ahead of the domestic season. This, from a man who had in 2000 requested his state body to reschedule Mumbai's Ranji trophy semifinal against Tamil Nadu so he could return from Sharjah and play.

But that story has a twist. Tendulkar's star value had enabled Mumbai to get a sponsor (a pen manufacturer) worth Rs 40 lakh. The star too agreed to play ball, on condition he wouldn't be used separately by the sponsors for publicity campaigns. But the latter didn't keep their word and a furious Tendulkar demanded Rs 30 lakh for breach of trust. The sponsors, in retaliation, broke the contract.

A year later, a liquor manufacturer offered in excess of Rs 1 crore as a five-year sponsorship deal to MCA. A sulking Tendulkar excused himself saying he couldn't back a liquor product. Predictably, the offer melted way, and it was the turn of his Mumbai team-mates to sulk.

So is it all about money or the game? It's not just Tendulkar. His India mates haven't exactly done domestic cricket any favours either. They hardly ever turn out for their state teams even though, as all know, domestic cricket will get a great fillip due to their presence. As things stand, domestic cricket is starved of both funds and attention. Arun Lal, vice-president of the Indian Cricket Players' Association (ICPA), puts the issue in perspective: "Why blame players, even the press ignores domestic cricket. How many, for instance, go to cover a Tamil Nadu-Goa match?" Admits sports journalist Ahmed Abbas Rizvi: "Even in a Ranji Trophy final, most of us walk in only to collect the scorecard."

For domestic players, it's a barren life, with little chance to test themselves against any form of international class of bowling or batting, not even our own. No wonder then that their weaknesses are exposed so easily when and if they are selected to play for India. Any bowler of promise would learn much bowling to a Dravid or Tendulkar. Any talented batsman would improve if he played Srinath or Kumble regularly. But, nowadays, a Sehwag or Nehra comes up not because of the domestic league, but in spite of it.

Says ex-India stumper Surinder Khanna: "Doubtless, it'd be a shot in the arm for a bowler to bowl to the likes of Tendulkar. And if he was to take the prized wicket, well.... On the flip side, it could also save careers from disintegrating. Take the case of L. Balaji. He picks up loads of wickets on the domestic circuit but just one over of international cricket (against the Windies) and he hasn't made a comeback yet. His true worth, because of the lack of quality cricket at the domestic level, was perhaps overrated."

But it's also a chicken-and-egg problem. The poor quality of domestic cricket is due to the absence of top stars. Conversely, the stars feel it doesn't help their game to be involved at this level. On the face of it, India's international engagements also leave little time for domestic cricket. Take the forthcoming season: the domestic season starts almost to the day when New Zealand arrives for two Tests and a triangular series in September-end. Between this and a trip to Australia in November, Indian cricketers get a breather for just 10 days. They return in February 2004 and, if all goes well, dash off to Pakistan the same month only to return in April. By then, the domestic season is over. Last year, India played the Oval Test in England in September and in four days were turning out for their Champions Trophy opener in Lanka.In '01, India were playing a Test in Mohali against England inside 72 hours of returning from South Africa!

Cricketers cite various other reasons for their disinterest. An Ashish Nehra tells you his state physical trainer somehow didn't have the exacting standards as Adrian le Roux, the India team's ex-fitness expert. "The state trainer is liable to get offended if I don't appear keen," he says. "And the media rushes to the conclusion that somewhere down the road, I've become too big for my boots."

Sehwag, whenever he can train at his home ground, Ferozeshah Kotla, prefers a stealth entry rather than risk the swarm of autograph hunters at the entrance foyer. "Earlier, I used to struggle to catch the eye of the officials. Now, a day at the Kotla means photographs and autographs for their friends and relatives," he says.

But it isn't as if international players are not keen on helping out their states. Indian vice-captain Rahul Dravid, for instance, is hooked on to the Net on tours to catch up with Karnataka's latest progress. He gets upset at the continued failures of a state mate, or at somebody's inability to translate talent into form, even picking up the phone to admonish him for slip-ups.

Captain Saurav Ganguly, similarly, follows Bengal's progress closely. He is known to distribute tips and gear freely to his state mates. Says Khanna: "Most of these guys, I can tell you, love to be back with their mates with whom they spent their initial years. It's up to the board to organise the domestic calendar so it does not clash with international fixtures."

But there's another extremely important issue here. Money remains a point of concern. The captain of a Ranji trophy winning team, for all his labour through the season, can't expect to earn more than Rs 1.1 lakh. So it's easy to understand why an upcoming player like Mumbai's Rajesh Pawar thumbed his nose at a National Cricket Academy camp. He didn't want to break his summer contract worth Rs 6 lakh in the minor league in England. From an extremely humble background, for Pawar the choice was clear. He did pay for his stubbornness though, not getting a berth in the India A side, but nobody can fault his reasoning.

Domestic players now get Rs 6,000 per match which could stretch up to Rs 1,00,000 for a season. Compare this with Rs 8.35 lakh (Australian $27,500) season fee which the average Aussie player takes home or approximately Rs 19 lakh (£25,000) in English county. Thunders Arun Lal: "You don't expect a Ganguly to jump with joy at the mention of a Bengal-Kerala encounter. He's unlikely to say, 'Hurray, boys. Let's go play in Trivandrum!'"

But in other countries too, the international players don't get to play too many domestic matches. For instance, in Australia last season, Ricky Ponting, Adam Gilchrist and Damien Martyn played just one game in the Pura Cup. Steve Waugh turned out in seven games but then he wasn't in the one-day squad.

It being so, the bcci can't escape its responsibility in the matter. Its efforts to enforce player participation has been feeble at best. In 2000, then board chief A.C. Muthiah had grandly declared: "Either players turn out in domestic matches or selectors would be asked not to consider them for international matches." But it remained mere rhetoric. Tendulkar, for instance, has requested Board president Jagmohan Dalmiya twice in the past two seasons to be excused and was granted his wish. Agrees bcci's joint secretary Jyoti Bajpai: "It's been a failure on our part to enforce players' participation."

On the face of it, players have ample reasons for avoiding domestic cricket. But trust that great leveller—money—to have the final say. Asks Bajpai: "If the price is right, don't players go to any part of the world to play an exhibition game? Why is there then this uppity posturing?" It's a clinching argument few can refute.

Phantom Of The Fossils