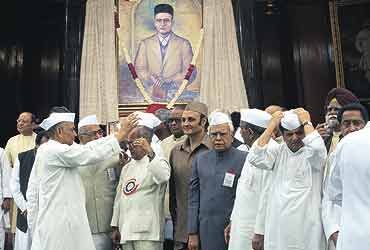 That remark, as well as another move—distancing himself from cabinet colleague Mani Shankar Aiyer's stand on Veer Savarkar at his maiden press conference on September 4—may have endeared Manmohan Singh to the RSS-BJP combine, but it has left the Left parties (whose 60-plus MPs sustain the UPA government) fuming and sections of his own party embarrassed. Only sections, because Manmohan's studied neutrality has resonated with many in a party grappling with strategies to counter the BJP's no-holds-barred ideological onslaught.

Congress spin doctor and Rajya Sabha MP Jairam Ramesh defends the PM: "Dr Manmohan Singh is staking out the classic liberal position of the Congress which eschews dogmas and ideologies of both extremes." On whether it is tenable to equate the Right with the Left especially since the Left is the UPA's lifeline, he retorts, "Taking the Left's support doesn't mean we emasculate ourselves and kowtow to them at every step."

Clearly, there is a disconnect between those who pursue the Arjun Singh brand of anti-Hindutva and those who believe that the Congress must stride the middle path. Even if it means annoying the Left which wants the party to adopt a clear line on ideological issues. Minister of state for parliamentary affairs Suresh Pachauri says: "The Left is important because it supports us and due weightage must be given to its views, but the government must take its own line."

It is this kind of ambiguity that has characterised the Congress response to key issues like Savarkar. Many in the party fear a strong line would alienate Hindu voters in the forthcoming Maharashtra elections. Hence, the temperate voices in the party are trying to downplay...