They're a study in inspiration. Children who overcome their straitened contexts through sheer grit and desire. 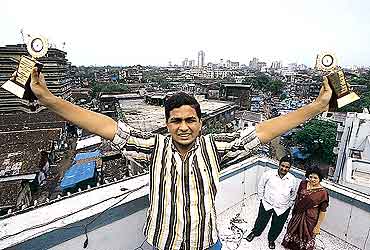 outlookindia.com
-0001-11-30T00:00:00+05:53
It was a hunger for education that led Prasad Akkanouru to serve food at a small hotel in Nagpur. And as he waited tables for long hours by the day, he waited to study even longer hours at night. Prasad had fled his home in Latur nearly three years ago to escape his parents who had forced him to take up an uninspiring course to become an electrician and later work in a sugar factory. Trawling Mumbai's sidewalks hungry and tired for days, he finally reached Nagpur. To top the year's arts batch of the Class 12 exams of the Maharashtra Board, Nagpur division.

"I didn't even know he had taken the board exams," says a bemused Kusumchand Jain, owner of the hotel where 22-year-old Prasad worked. "When the boy said he wanted to check his result, I told him I hope he would pass!" Prasad did one better, notching up an 86.5 per cent, and now has admission to Pune's prestigious Fergusson College. He now plans to become a civil servant: "My result has given me so much confidence...."

These are the First Among Unequals. Children like Prasad, who run the race with many hurdles in their tracks, many more than their competitors have to clear. And triumph still. Less privileged, less pampered than the many they outscored in this year's board exams. Achievers whose remarkable results in the nationwide class 10 and 12 exams are truly the aggregate of true grit, diligence, determination and a diehard desire to do well.

An out-of-work father, a mother who scrounges for work and sustenance in Calcutta's Dhapa garbage dumps, living with four other family members in a tiny tenement at the Hatgachia slum, without electricity, without water—and Pradip Sinha still managed to get on top of the situation. Securing 80 per cent in Class 10, he has topped his school in the West Bengal secondary board this year. Bare-bodied, hands grimy with dirt from the garbage dump where he works to supplement his mother's income, Pradip says he "studied whenever possible" to tot up the miracle marks. Even if it meant studying in the dim glow of a kerosene lamp. But Pradip still sees little light at the end of the tunnel, confused about his future: "I have no clear idea what stream to study now, where to go, what to do." But father Kamal Sinha is surer: "The goodwill my son has found after his results will help us see better days."

Similar hopes abound in the Chidrewar home in Pune. The notice board outside the flat they live in has the family's name underlined in red. Not because son Vaibhav, having scored 91.8 per cent in Class 10, has made it to the merit list in the Pune division of the Maharashtra board. But because the family tops the list of "building defaulters" who haven't paid their dues. How could they? Vaibhav's bhelpuri vendor father has been spending most of his earnings in educating his son, resisting pressures to send Vaibhav to work and augment his income. Instead he has put his child through tuition and enrolled him in art school. The investment is promising returns. Vaibhav's dreams have upscaled: "I want to join the merchant navy and see Switzerland."

It perhaps won't be an easy journey to make. Just as it wasn't a smooth ride to the top for Sandeep Chauhan, son of a driver. Scoring 93.71 per cent, he is now in Ahmedabad's list of top 10 scorers for this year's senior secondary exams. Despite the family's financial situation or their claustrophobic one-room home in the city's Maninagar area. "You don't have to be rich to do well in exams," he says. "You don't need expensive personal tuitions. You don't need pep talk. You don't need expensive cars to drop you at the exam centre.You just need to have it in you."

What else can explain Kiron Bora, son of a boatman who ferries people to Assam's Majuli island, swimming his way into the merit list of the class 10 exams of the secondary education board of Assam? This, when his school was flooded three months in a year, and his poor, seven-member family just about made ends meet. Kiran just tutored others to see himself through his education. But he wants more than just to get rich: "I want to become an officer and develop Majuli."

Tulsa in Ludhiana knows her mind as well. She wants to become a teacher: "There are so many more poor children like me who want to study and study well. When I become a teacher, I'll do my bit for them to make their lives more meaningful." She should know. Her father is a watchman in a cycle company, her

mother a maid in a school. But Tulsa managed to outdo thousands of students from affluent families who took the class 12 exams under the Punjab School Education Board this year. She has stood second in the state, with 89 per cent marks. Her family had to struggle hard to pay her fees, though they did avail of concessions for the economically weaker; Tulsa even won a Rs 1,400 yearly scholarship from the Nehru Siddhant Kendra. "It helped pay for extra books," she says, "and relieve my parents from some of the burden they've had to bear to educate me."

Significantly, Tulsa, Kiron, Sandeep, Vaibhav, Pradip are all first-generation learners. Their parents are barely, if at all, educated. Mothers and fathers enamoured by the promise that letters learnt will help script a better future for their children, it is these parents who make for the groundswell in the demand for education in India. They—like Kiron's father who sold three bighas of his land to provide for his son's schooling or like Sandeep's father who worked overtime to pay for his child's tuition—are as intrinsic to these success stories as the children themselves.

"Ab hamein bhi padhne mein dilchaspi ho gayee hai (Now I too have found an interest in education)," says Wajeda Karigar's father, peon at a Pune technical school. Busy attending felicitation functions and managing reporters who swarm his small house in the Lohianagar slum after his daughter scored 95 per cent and a fourth rank in the Class 10 ssc exams, Karigar is overwhelmed by the fruits of education. He wishes he had pushed his three older children, all dropouts. But then, unlike them, Wajeda had never needed to be coaxed into studying. She would be into her books by 4.30 every morning, to avoid the slum's noisy mornings, blaring radios, TVs, gossip and late-night drunken brawls. And the results are writ large on a banner that flutters at the entrance of the congested lane Wajeda lives in. "People see the banner and want to send their daughters to school," says her father. "Now younger girls come to her and ask her how to study."

Even greater studies in inspiration are the children who have fought and won over graver challenges like disabilities to come out tops in their class. Wheelchair-bound after he was paralysed waist downwards for the past eight years, Ritam Deka had to be carried into school by attendants and his hands had to be lifted by someone before he could start writing his exams. But it didn't stop this student of Guwahati's Don Bosco School from securing above 80 per cent marks in his Class 10 exams this year. Headmaster Father J.M. Thelekhatt can't help but marvel, "It's truly remarkable how neither he nor his parents have given up."

Just as his deafness didn't stop Divin Visariya from being the only one to launch into a speech when the compere at a recent education board felicitation function in Mumbai asked if any among this year's board toppers would like to speak.Divin scored 91 per cent in his class 12 exam and topped the Mumbai division of the Maharashtra Board. People now better listen to him. He'll even tell you how he wants to now do a PhD from Mumbai's vjti engineering college and become a scientist. His regret is he couldn't take the iit exams: for even if he did get admission, living elsewhere would cut him off from his parents because he can't even call his parents. For now, back from his first engineering coaching class, Divin is learning to cope with newer challenges: "I couldn't lip-read the teacher, he never looked at me and spoke too fast." But, rest assured, Divin will catch on.

And maybe outspeed others. Like Ahmedabad-based visually impaired sisters Dharamishta and Mamta Patel do the exam writers assigned to them. "Those who write answers for us get exhausted," they chuckle. With Mamta having scored 77 per cent and Dharamishta 76 per cent marks in their higher secondary exams this year, there is a lot of mirth in the Patel household these days. Their father, Chandubhai Patel, is joyous: "Today I am so glad that my blind daughters can stand up on their own and proudly so." No doubt about that. Because the remarkable stories of these children really aren't about their marks. They're about making a mark in the face of adversity.

Saumya Ray in Nagpur and Pune, Nitin A. Gokhale in Guwahati, Darshan Desai in Ahmedabad, Ashis K. Biswas in Calcutta and Chander Suta Dogra in Chandigarh