Perhaps the time has come for New Delhi to approach Musharraf as a possible ally in a joint war against religious terror. 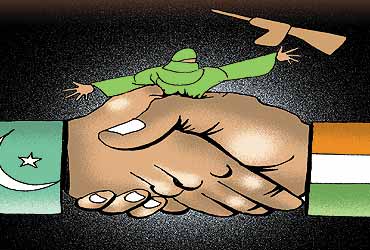 outlookindia.com
-0001-11-30T00:00:00+05:53
After our prime minister's endorsement of fundamentalist rule in Gujarat, should we revise our criticism of Pervez Musharraf? Review our condemnation for his failing to act effectively against the jehadis in his country? After his January 12 address, many fundamentalist groups were banned and hundreds arrested, among them the sponsors of cross-border terrorism. But of late he seems to have been influenced by Gujarat. Some jehadis have been released after they signed good-behaviour pledges. Others were treated gently and placed under house arrest.

In time, Musharraf may learn to measure up to the standards set in Gujarat, where there is no need to release individuals known to have killed and tortured in the name of religion; they roam free. And in the name of democracy, the ruling party is rewarded with permission to hold elections while the victims cower in fear. Pakistan's president too faces compulsions originating from deep-rooted fundamentalism and an approaching referendum, followed by elections.

Days ago—it seems another age—Atal Behari Vajpayee agonised over the happenings in Gujarat in eloquent Hindi verse; we assumed he was expressing his innermost feelings. No longer does he sing, he sighed, the scars are too deep; the truth too frightening. And, in a phrase, some thought was aimed at his associates, he talked about the mask having fallen. It has, but whose?

Musharraf is no poet. When he took power in Pakistan, he stressed his secular credentials by being photographed with an unveiled wife and his pet dogs—anathema to the orthodox. He took some measures against the teaching of terror in madrassas and elsewhere, but modified them under pressure. He faced a formidable problem when it came to eradicating the fundamentalism deeply embedded—thanks to his predecessors—in a combine of politicians, bureaucrats, intelligence officials and generals who built their fortunes by promoting it. He may not have been able to take them on directly sans the US pressure and financing that followed the September 11 terror attacks and its subsequent involvement in Afghanistan, he may be making compromises, but he hasn't changed his line.

Musharraf's difficulties have not lessened over time. The cruel killing of Wall Street Journal reporter Daniel Pearl and the attack on an Islamabad church, in which two Americans were killed, indicates the lengths to which fundamentalists are willing to go to embarrass him. Yet his government has not yielded to US efforts to secure the extradition of Omar Sheikh, the man charged with killing Pearl, an event that made world headlines. It insists that his guilt be established by trial in Pakistan first. Washington describes the move as a request, not a demand. It realises that making Musharraf seem an American stooge would be self-defeating.

Contrast this with New Delhi's repeated demand—made under threat of half-a-million men on the border—that the 20 criminals it has named be handed over. Islamabad complains that the required evidence is not available. Shortly after the initial message, Union external affairs minister Jaswant Singh described it as an expectation, not a demand. But soon it became a virtual ultimatum. The objective was to demonstrate India's dominance. But now, after Gujarat, we can no longer take the moral high ground. We are condemned to share the international doghouse with Pakistan.

And the outcome of the ultimatum? The largest concentration of Indian troops on our borders ever, standing by in battle-ready positions for nearly four months. Summer has come; they and their weapons and ammunition are out in the open or under canvas. Yet they know that war is unlikely. The effect on their alertness, their training, their families, their morale can be imagined.Civilian life has also been upset. Farmers of front-line villages complain that they are unable to harvest their fields, many sowed with mines.

Our diplomacy was exemplified by our response to Pearl's murder, and the tone hasn't changed. It would take considerable effort to conceive of a more self-defeating reaction than the remarks of our MEA spokesperson. The real target of the killing was clearly Musharraf. But instead of recognising the threat he faces in taking on what should be seen as a common enemy, Pakistan was accused of providing "safe havens" to them, though the warning conveyed by the brutality of Pearl's killing, especially the filming of his decapitation, couldn't have been clearer.

New Delhi's demand that Pakistan take concrete steps to end cross-border terrorism is justified as long as there is evidence of it continuing under official patronage. Musharraf condemned all forms of terrorism on January 12, as he had the December attack on India's Parliament. But it would be as absurd to ascribe every attack in India directly to Islamabad as to blame New Delhi for disturbance in Pakistan.

Infiltration across the LoC may increase after the snows melt, but it is hard to ascertain how many of the terrorist attacks in J&K are mounted by outsiders and how many by local militants. And whether the attacks by foreign elements are facilitated by Islamabad, or by those keen to embarrass Musharraf.

The fleeing Al Qaeda terrorists may now try to enter Kashmir. Perhaps the time has come for New Delhi to approach Musharraf as a possible ally in a joint war against religious fundamentalism, if we are serious. We can then thin our forces on the international border and enable him to divert his to the border with Afghanistan. But while most Pakistanis may not support terrorism, they are convinced that India holds the best part of Kashmir against the wishes of its people. So, while we may legitimately expect Musharraf to act against cross-border terrorism, he is unlikely to accept India's case. That issue can be addressed only through diplomacy. Meanwhile, New Delhi can strengthen its case by honouring promises of autonomy in the Valley.