The Frame Can Be Wider

Kamal Haasan’s anti-corruption outbursts of late can well be signs of the star’s next move: politics 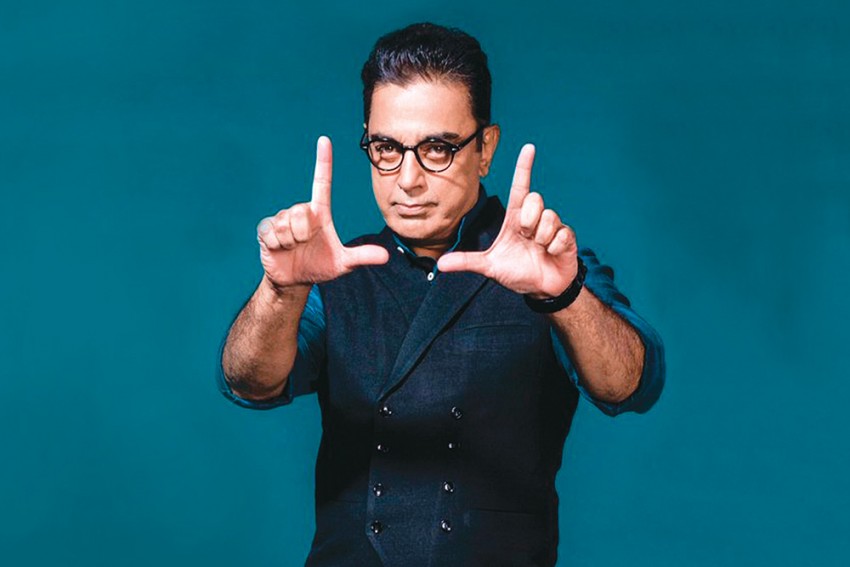 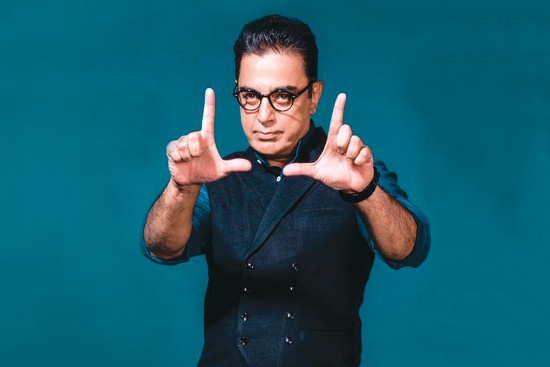 Kindergarten kids. That is to whom Kamal Haasan likened them. “You are saying we are adults. Really? By such behavi­our, you are only exposing yourselves,” the popular actor admo­nished the contestants of Bigg Boss after a round of petulant conduct and catfights on the Tamil television show.

That July 22 remark may as well have been directed at a few Tamil Nadu ministers who attacked the 62-year-old for his allegation that corruption had seeped into every department of the government. It pushed Kamal into a controversy, which soon started gaining new colours. He was posed a question: are you taking the political plunge?

While his colleague Rajnikanth is only waiting for a call from above to anno­unce his arrival in politics, Kamal is making comments that to some sound like precursors to a similar turn. “I have been in politics ever since I participated in the anti-Hindi agitation,” he had tweeted. “If I decide I am the leader, Chief Minister.”

It all started as his reply to a Hindu outfit’s claim that Bigg Boss was against Tamil culture: the show featured women clad not too modestly, speaking in a lingo far from classical. Resentment brewed, and, once Kamal remarked on corruption, it blew up into an open political fight.

The AIADMK government perhaps overreacted, according to some observers. “Had the ministers ignored Kamal’s observations, things wouldn’t have fla­red up. Instead, they sought to provoke him calling him a third-rate actor who had no right to comment on politics unl­ess he entered it,” notes B. Thiru­mavelan, editor of Junior Vikatan. “Like any ordinary citizen, Kamal has every right to criticise a government. One need not be in politics to comment about a government. What hurt them was the criticism came from a celebrity who occ­upies mind space.”

The film icon went on to exhort his fans and the public to report online to ministers all instances of corruption. That further infuriated the regime. “All his recent pronouncements app­ear motivated,” says finance minister D. Jayakumar. “They spring from a deep-seated animosity tow­ards the AIADMK after Amma (late chief minister J. Jayalalitha) had stopped the rel­ease of his film Viswaroopam (2013), as it had hurt Muslim sentiments. The way the DMK jumped to his support is further proof that he is being used as a cat’s paw to attack us.” 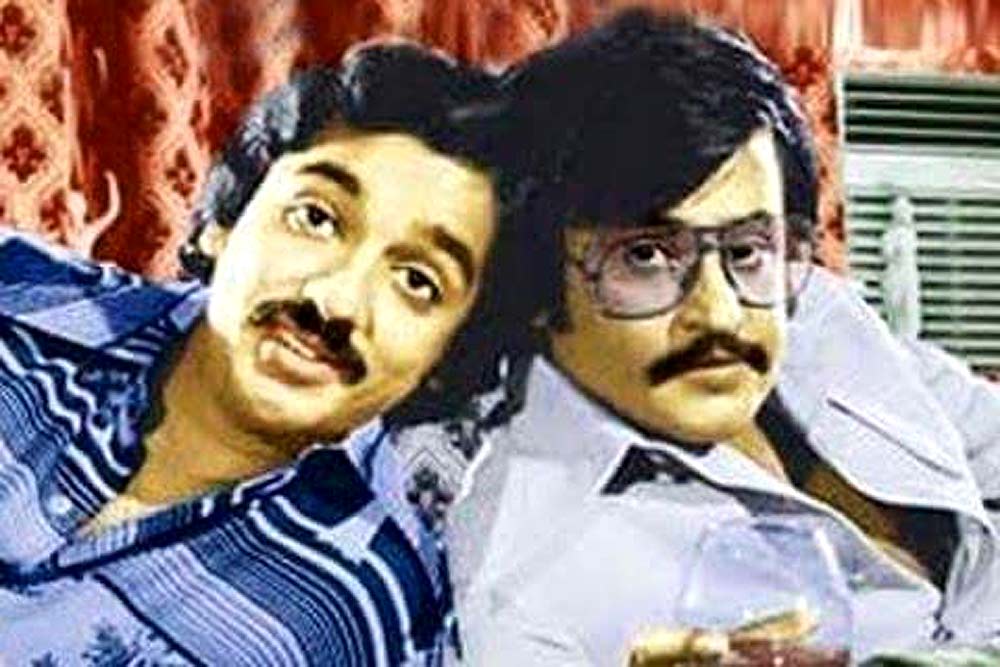 Kamal and Rajni are two stars who made it big in Tamil cinema, branching out after an initial collaboration. Today, both seem keen to join power politics.

The new controversy only helped improve the ratings of Bigg Boss, much to the benefit of Kamal after round one. The question about the actor’s political ambitions was raised when he supported statewide pro-jallika­ttu protests earlier this summer and even recalled that he himself had played the bull sport in a movie. Similarly, he had also arg­ued that eating beef was one’s personal choice. “Will you ban biriyani?” he had asked when questioned about a ban on cow meat. The words only reflected a politically active mind that was not afraid to speak out. But when it comes to stepping into politics, the three-time national award winner has always played it safe.

Filmmaker K. Hariharan, a long-time friend and Kamal’s biographer, wonders why the actor should “downgrade himself” by wading into politics. “He is a cultural icon and we need to preserve that status,” he says. “You cannot expect him to start at the bottom as a maverick and end up like a joker. Instead, we should look for a space where people like Kamal can actually contribute to governance by interacting directly with bureaucracy. They should be part of an apolitical think-tank that society can use.”

Wind back to end-2015. The December floods in Chennai that year prompted Kamal to ask how the city had reduced its waterways—two rivers and as many major canals—into open drains. They could neither handle the deluge nor help conserve rainwater. “If someone like Kamal can take the lead in preserving our water bodies, it would be a great boon to our movement,” says environm­entalist Arun Krishnamurthy, implying the actor would be better off campaigning for iss­ues that directly affect people than get mired in politics.

The Opposition DMK has attempted to exploit Kamal’s anti-AIADMK posturing by inviting him to speak at the platinum jubilee of the party organ Mursaoli in August. The DMK claims Kamal, being an atheist, is ideologically closer to the party. He has even acknowledged having been a great fan of the Tamil-language skills of M. Karunanidhi, the DMK patriarch. Actor S. Ve Shekhar isn’t sure how deep one should read into such statements. “Well, Kamal has also recalled how, as a child artiste, he had been carried away by both (actors) M.G. Ramachandran and Sivaji Ganesan,” says the ex-legislator.

What has surprised many is the state BJP, too, joining the offensive against Kamal. Its leader H. Raja says the actor needs to be opposed as he had insulted Hindu gods. The BJP suspects that Kamal was being firmed up as a counter to Rajni’s entry since the latter could favour the saffron party. It could be part of the DMK’s gameplan to play Kamal against Rajni since that party’s leader M.K. Stalin has “more to lose with the arrival of Rajni” Raja argues.

Unlike MGR, who first leveraged the DMK’s machinery and later the anti-­Karunanidhi vote-bank built by Congress veteran K. Kamaraj, Kamal—or for that matter, Rajni—has to start a political outfit from scratch and make it relevant bef­ore the next elections. That is no easy task, as actor Vijayakanth has already learnt, fading away a decade after starting his own party. While Rajni can take adva­ntage of the present political vacuum, Kamal, trying to recover from financial and personal setbacks, cannot risk a political venturatthis stage in his life— esp­ecially after antagonising the ruling party. Also Rajni may be acting in his last film, whereas Kamal still needs to complete two in the pipeline and would like to try a few more.

Early in their film careers, after a brief collaboration, Kamal and Rajni branched out on their own, sensing the separate markets they could exploit. Yet, they have rem­ained the best of friends, a rarity in Tamil cinema. Will they now come together on the political arena? “Even if they come together they cannot win more than 15 per cent of the votes,” predicts actor Charuhasan, the eldest brother of Kamal. “They may have fans, people may love their cinema but here people vote out of emotions and not affection. The only two emotions they know are the DMK and the AIADMK. So don’t expect any magic even if Kamal and Rajni jointly float a party.”

Also, Kamal is “smart enough” to know that voicing his views on issues is not the same as starting a political party and contesting elections. “Since we live in a corrupt society, he will speak out, but not step out,” adds Charuhasan.