In a volte-face, the BSP supremo is out to embrace those untouchables—the Brahmins. Will they give in? 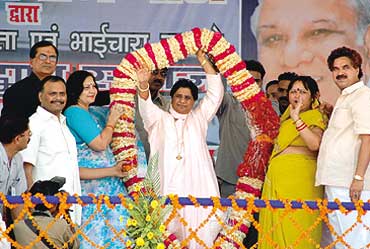 outlookindia.com
-0001-11-30T00:00:00+0553
For four months, BSP leader Mayawati has travelled across Uttar Pradesh, touching 26 districts, relentlessly wooing an unlikely social group—those at the top of the manuvadi pile, the Brahmins. By the time she reached the state capital Lucknow on June 9 to address a Brahmin maha sammelan at the Ambedkar stadium, other political parties in the state had begun to take notice. Mayawati was accompanied for the Lucknow do by former state advocate general and now Rajya Sabha MP Satish Mishra and student leader-turned Lok Sabha MP Brajesh Pathak—both Brahmins. Was she really making a dent in the ranks of the 'twice born', among those who had such utter contempt for the bahujan samaj and whom she had once castigated in the strongest terms?

If success can be measured by the praise of one's natural critics, then Mayawati is on strong ground. Former BJP state president and now Rajya Sabha MP Kalraj Mishra says candidly: "In UP today, the national parties, the Congress and the BJP, have become irrelevant. The upper castes have begun to feel that these parties are incapable of fighting either the Samajwadi Party (SP) or the BSP and so gradually, their vote is getting polarised between these two parties. It is this psychology that Mayawati is skilfully and intelligently working on through these Brahmin sammelans." According to him, Brahmins matter in 140 of UP's 425 assembly constituencies. And Mayawati is succeeding because the national parties "lack the capacity to win elections". Of course, he adds, "It is not a hopeless situation, though. If we formulate a course of action with effective programmes, we can make a comeback."

A different endorsement comes from a three-time SP MP: "Elections in UP are no longer about political parties—the only appeal is caste. Mayawati's sammelans have signalled one change: earlier, when she gave Brahmin candidates tickets, the candidate, knowing he was assured the BSP traditional vote, would have to work to persuade his own community with the slogan 'Pathar lagao chhaati pe, mohar lagao haathi pe' (harden your heart and vote BSP)." In his view, that upper-caste allergy for Mayawati is gone. Now all that matters is increasing Brahmin—or upper caste as the case may be—representation in the assembly or the Lok Sabha.

Of course, the SP MP hastens to add that it would be erroneous to say the Brahmin vote bank is moving to the BSP. It is only that members of the community will vote without blinking an eyelid for the BSP, provided the candidate is from among their community. "The Brahmins can never, as a community, identify with the BSP they way they did with the Congress and then the BJP," he stresses.

But clearly, Mayawati's gradual image makeover is making an impact. For the upper castes, the decline of the Congress and the BJP—its natural homes—have cast them on the political margins. And so, they are willing to forget the belligerence of 'Tilak, tarazu aur talwar, inko maaro joote chaar' (thrash the Brahmin, Baniya and Kshatriya) and tune into the gentle: 'Yeh haathi nahin, Ganesh hain, Brahma, Vishnu, Mahesh hain' (the BSP's election symbol is what Brahmins worship).

The BSP's national spokesperson Sudhir Goel likes to pitch the change as part of a "process of social transformation". Mishra clarifies that Mayawati is not against Brahmins per se but the caste system and says of the sammelans: "It was the first time in history that Brahmins and Dalits came together with the upper castes instilling a sense of equality in the latter." The party's national treasurer Ambedrajan has this take: "We have always given upper castes tickets, from 1995 onwards. Now this is the second stage. Currently, we command 24 per cent of the vote in UP while the SP is ahead at 26 per cent. If we can bridge this gap and forge a few points ahead with the help of the Brahmins, we will be number one in UP".

UP's Brahmins, who account for 13.5 per cent of the vote, were used to wielding influence much beyond their numbers. But the rise of backward and Dalit power in the last 15 years has seen a decline in the community's influence; the general elections of 2004 were a watershed. Till 1989, the community voted Congress; the Ayodhya movement saw the Brahmins move to the BJP. But with disillusionment setting in its ranks with the BJP and, especially, Atal Behari Vajpayee, a Brahmin, the community was suddenly orphaned.

During the Lok Sabha elections in 2004, Brahmins across the state had begun to look to the Congress and its heir apparent, Rahul Gandhi. A year has gone by, Rahul Gandhi is still playing the shrinking violet, and the Brahmins, rudderless and leaderless, are taking its chances elsewhere. Says a political watcher in UP: "What we are witnessing now is a battle for existence by the Brahmins—they have always been used to power and they want it at any cost. First, there was Nehru, Indira Gandhi and Rajiv Gandhi and then there was Vajpayee. Now there is no one who inspires their loyalty. The Thakurs—their natural rivals—are aligned with the SP and, therefore, the BSP is the only option." 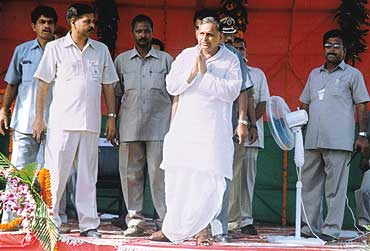 Officially, the SP, the BJP and the Congress are, pooh-poohing Mayawati's attempts to woo the Brahmins. SP state president Ram Saran Das claims that his party has real Brahmin leaders while the BSP's Brajesh Pathak and Ramveer Upadhayay "are just mafiosi". BJP state president Kesrinath Tripathi stresses the Brahmins who have gone to the BSP are "opportunists" and that it will not affect the mass of Brahmin votes as they still remember the anti-upper-caste slogans mouthed by the party. UP Congress leader Pramod Tiwari too says the Brahmins will not forgive the BSP: "As the Brahmins are no longer with Vajpayee, they will now return to the Congress."

Of course, what Mayawati's political rivals are hoping is that her espousal of the Brahmins will backfire on her core constituency among the Dalits. The Congress general secretary in charge of UP, Satyavrat Chaturvedi, says: "There is a great deal of churning among her Dalit supporters. They are concerned about this 180 degrees turn in the party ideology. There are the beginnings of a rift. I don't know whether Mayawati will be able to keep her base intact. Already, a few days ago, DS-4, the organisation initially created by BSP founder Kanshi Ram from which the party has grown, had a rally in Lucknow where its members denounced this turnaround." But Ambedrajan dismisses this, saying Brahmins will never get the upper hand. "They can't empower or overpower us—we outnumber them."

Smita Gupta with inputs from Sutapa Mukerjee in Lucknow