The Forest Is Moving

Are our central police forces up to the task in taking the war to the Maoists? 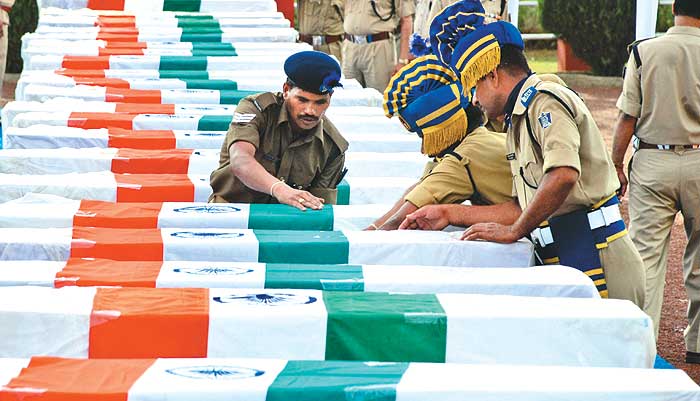 For once, Union home minister Palaniappan Chidambaram seemed at a loss for words. When asked about the deaths of 27 CRPF jawans in south Chhattisgarh’s Narayanpur  on June 29, he replied, “These deployments are decided by the state government. I have asked the CM to look at redeployment of the CRPF in light of the operational objectives. The CRPF is posted in the most difficult areas and one can accept that the Maoists will attack.”

In April this year, they had killed 76 jawans in Dantewada, just a couple of hours’ drive from the current attack site. For a force that is touted to be a crack counter-insurgency squad, the casualties are disturbing. But its leadership has strangely eluded criticism. Neither DG Vikram Srivastav nor special DG Vijay Raman have been hauled up despite the fact that over 100 CRPF jawans have died in just three months.

“The home minister is on the back foot. The Centre must introspect on the decay in the central police forces.”
Prakash Singh, Former DG, BSF

Prakash Singh, former DG of the BSF and a police officer with almost 40 years of experience in counter-insurgency ops, feels “the home minister is on the backfoot”. Prakash feels there is something seriously wrong with the central police organisations (CPOs), their inability to perform having left the home minister in a difficult situation. “The Indian government needs to introspect about this decay of the central police forces. The CPOs are no longer as formidable as they were. Even the BSF has now issued orders that their forces should not operate beyond 5 km from their camps,” he says.

In fact, the forces seem to have learnt little from the Dantewada attack two months ago. While there were serious tactical lacunae then, there seems to have been many more during the current attack. This time, men drawn from two companies of the 39th battalion were sent out as a road opening party (ROP) so that convoys carrying CRPF personnel on leave could pass safely. It would have been a routine exercise but it went horribly wrong when a tactically superior force of Maoists surprised and ambushed them. What’s even more surprising was that even as the CRPF jawans were fighting for their lives, reinforcements took almost three hours to reach the encounter spot. Had they arrived earlier, the CRPF would have suffered far lesser casualties and would have probably inflicted more casualties on the Maoists.

But that was not to be. The CRPF party, say officials who are familiar with the incident, probably forgot to hold the “dominating features” during the encounter. This gave a major tactical advantage to the Maoists. The patrol even forgot to deploy in a linear manner, a standard operating procedure for all ROPs. “The idea is to ensure that, in the event of an ambush, the troops are not bunched together. They should be deployed in a linear fashion so that, if attacked, they can outflank the Maoists and counter-attack,” a senior police official and counter-insurgency expert told Outlook.

E.N. Ram Mohan, former BSF DG, feels the organisation may be finding it difficult to come to terms with its new role. Soon after Dantewada, Ram Mohan had been asked to prepare a report on the reasons for so many casualties. While he has not discussed the report in public, Ram Mohan points out that the CRPF is still coping with its counter-insurgency role. “It was created to be a force that would play a role in restoring law and order. Its philosophy is of using minimum force. But in a counter-insurgency role, you  shoot to kill. That’s a huge jump, and the force needs time to reorient itself to this role,” Ram Mohan told Outlook. An ironical contrast to the sort of flak the force is taking in Kashmir.

Serving CRPF officers also point to a larger systemic failure that has left the force in disarray. Constables and officers of the force are poorly paid, as compared to the army ranks or the officers of the IPS. They also have few benefits and unlike army units which are regularly rotated from field areas to peace stations, the CRPF keeps lurching from one conflict zone to the other. “It’s left us demoralised and ineffective. We just try to survive from one field tenure to the other without any relief for years on end,” a CRPF officer points out.

In fact, the CRPF’s overall performance has been less than flattering of late. While casualties have been unacceptably high, they have also inflicted less damage on the Maoists. Official figures show that while the state police killed almost 90 Maoists last year, the CRPF managed to take out only 20. This year the state police has already neutralised over 50 Maoists while the CRPF has just been taking hits (though it claims it killed 15 Maoists in the latest incident).

Which is why Chidambaram’s statement on June 30 raised more than a few eyebrows. “He has mentioned that the state government is responsible for deployment of the CRPF. But the operational deployment, tactics and strategy are left to the force commanders on the ground,” says a senior intelligence official. “So while the state can only ask the CRPF to be deployed in a particular area, how they guard themselves and conduct their operations is their prerogative. How can the state be held responsible for that? It is surprising that the Union home minister has mentioned that the CRPF is posted in difficult areas. Shouldn’t a security force like the CRPF be deployed in difficult areas to secure them?”

Sources also point out that the CRPF battalion had ignored several intelligence reports indicating a large Maoist force in the area. The IB had corroborated this as well. Instead, the men were sent out to conduct the ROP; they were on their way back to camp when the attack took place. For now, the Centre is considering replacing the CRPF in Chhattisgarh with battalions of the Assam Rifles. There is also a proposal to shift troops as well as battalions of the Seema Suraksha Bal to central India. Clearly, both the Centre and state governments are gearing up for a war with no immediate end in sight.