The Forest Is Alive Behind The Firebreak

There’s a new Maoist general secretary, but guerrilla bases have shrunk, recruitment dried up. Will the change of guard affect the security forces? 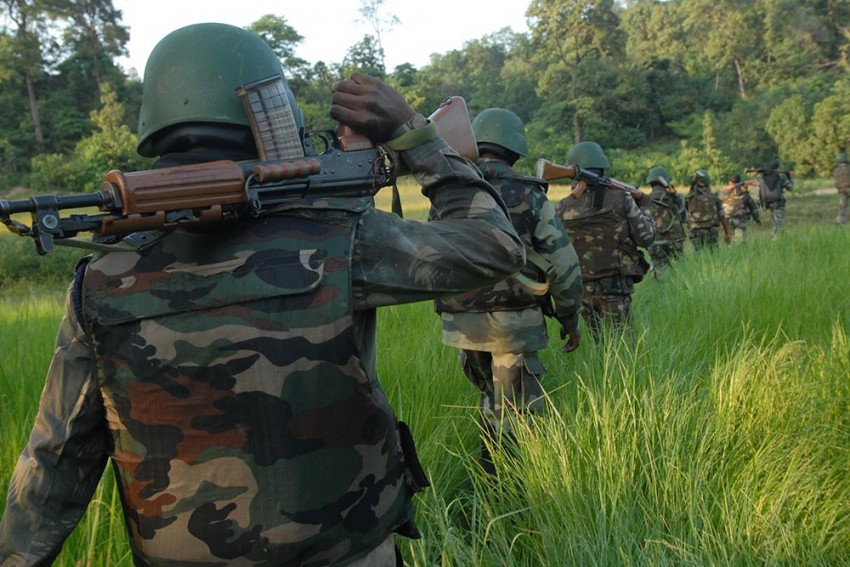 One Advice
Don’t fall into an ambush, the top killer of security forces in Maoist insurgency areas
Photograph by Tribhuvan Tiwari
R.K. Vij December 05, 2018 00:00 IST The Forest Is Alive Behind The Firebreak 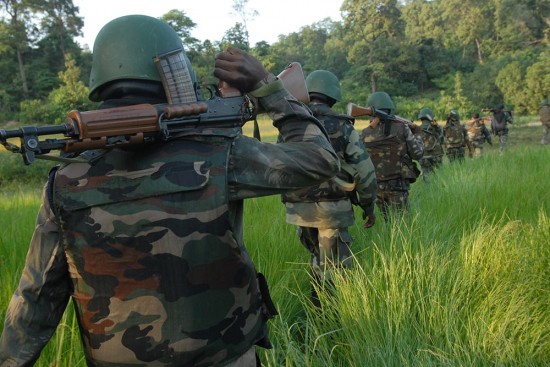 The proscribed CPI (Maoist) has now a new general secretary, Namballa Kesava Rao alias Basvaraju alias Gaganna, who was the central military commission (CMC) chief till recently. He replaced Mupalla Laxman Rao alias Ganapathy, the general secretary for about 25 years, who reportedly chose to retire voluntarily due to failing health and old age. The leadership change has brought to the fore an important question: will the organisation become more aggressive and ferocious now?

Till recently, Kesava Rao, as in-charge of the CMC, not only commanded all major offensives against security forces but was also responsible for various developments in the People’s Liberation Guerrilla Army (PLGA). In fact, the strength of the PLGA in Dandkarnaya increased sharply in order to crush the Salva Judum (Peace March) that rose spontaneously in May-June 2005 (against the Maoists as a challenge) in Chhattisgarh. The strength of the PLGA though continued to increase till 2010-12; it couldn’t keep pace with the simultaneous  advancements made by the security forces. Consequently, not only Battalion Number 2 of the PLGA split into its original two companies, the strength of all other military formations also suffered shortage of militia. By the time the CPI (Maoist) reviewed its ‘countrywide movement’ at the fourth central committee meet in April 2013 and realised its ‘critical situation’, many companies had reduced into platoons and then into guerrilla squads. All this happened under the nose of Kesava Rao, then chief of the CMC.

In fact, the latest change in the CPI (Maoist) does not make any difference to the security forces. The Maoists have suffered setbacks in the past years and repeatedly admitted this at their fourth and fifth CC meeting. The CPI (Maoist), at their Unity Congress—the ninth held in 2007—decided to convert guerrilla war into a mobile war, Dandkarnaya (DK) and Bihar-Jharkhand (BJ) into base areas and the PLGA into PLA. Dandkarnaya was one of their priority areas. However, after huge deployment of central and state police forces in the Bastar region, the objectives of the Unity Congress could not be realised but for occasional offensive against the security forces. A number of new camps and police stations have been set up in the Bastar region and advancements made by the security forces. This has not only resulted in a direct decrease of overall distances to be covered by the security forces, but has also reduced their vulnerability to counterattack. The guerrilla tactics as summarised and propagated by Mao Zedong that ‘the enemy advances, we retreat; the enemy camps, we harass; the enemy retreats, we pursue’ hardly remains a challenge for the security forces.

The Maoists have consistently admitted since 2013 that the new recruitment into their organisation has almost dried up. Except for the South Division (one of the nine in Dandkarnaya Special Zonal Committee (DKSZC)), recruitment has almost reduced to zero in most Maoist divisions. Their Chetanaya Nataya Manches (CNMs) are no more able to attract the vill­age youth. In fact, more cadres are leaving than joining the outfit. Most of the cadre have become war-weary and stopped expecting any revolutionary results. The surrender and rehabilitation policy of the Centre and state authorities have shown encouraging results. Even the frontline ideologues of the party like CC and DKSZC members did not miss to swallow the benefits of this policy when they surrendered before the police in their res­pective states of domicile.

More surprisingly, though most of the surrendered junior cadres are usually killed by the active Maoists, the surrender of senior cadres is not even criticised by their top body. Even Kesava Rao, the in-charge of all military actions preferred to remain silent. The recent surrender of CC member Jampanna in December 2017 in Telangana and of DKSZC member Pahaad Singh in August 2018 in Chhattisgarh shows that the trend has continued to progress. 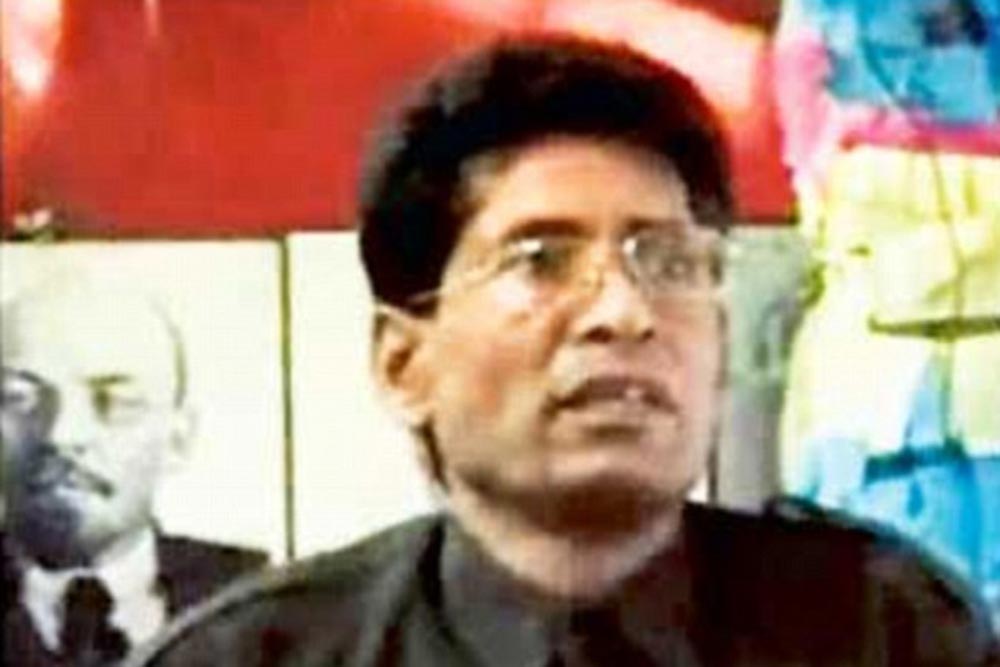 Will the outfit become more hostile after an ailing and old Ganapathy gave the baton to a new man?

Similarly, even the expansionist policy of the Maoist has not worked over the past years. After taking the decision in the 2014 Central Regional Bureau (CRB) meeting, the CPI (Maoist) tried to develop a new war front by sending a bunch of armed cadres from Bastar to the triangular area of Maharashtra-Madhya Pradesh-Chhattisgarh (MMC) hoping that the security forces deployed in the Bastar region will disperse. However, the state governments took proactive steps to strengthen their security infrastructure, deploying additional resources, and did not allow the Maoists to have their way. Some eastern parts of Chhattisgarh, falling under the Odisha State Committee of the Maoist, have not only shrunk in area, but also reduced in cadre strength. The Maoists are continuously suffering setbacks here.

Further, the top and experienced Maoist leadership has weakened and grown old. While many are in jail, a few have been killed in police action. The killing of CC member Kishenji in West Bengal and fellow member Koppam Devarajan in Kerala was a huge setback for their party and morale booster for the police forces. Following the decision ‘on the veteran comrades of the party’ at the fifth CC meeting, Ganapathy voluntarily withdrew because of ill health and old age. Others in the queue are Kishanda, Anand, Sangram, Kosa and Devuji. However, the security forces must not lose sight of the fact that the Maoists have undertaken to organise plans like leadership training programme (LTP) and military leadership training programme (MLTP) to make up for the shortfall.

Despite making huge advances, the security forces cannot afford to sit in camps and relent. Whereas the new general secretary will try to rejuvenate the cadres, our security forces have to march on till such insurgent groups are defeated or brought to the peace table. The Maoists have decided to focus mainly on ‘displacement’ of tribals and ‘exploitation’ of the labour and landless class in the rural areas. Though disturbed with the latest arrests, they have also decided to speed up work in urban areas. Organising ‘united front’ against the government is one of their main agendas.

The Maoists continue to rely on the PLGA as their main weapon of people’s war. The three recent attacks in Chhattisgarh, before the assembly elections on November 12 that killed more than a dozen and left many wounded, shows that the Maoists’ reliance on improvised explosive devices (IEDs) has not abated and these still remain one of their major weapons. They have also successfully experimented radio operated and remotely controlled IEDs in a few cases.

Second, the Maoists’ expansionist policy has to be checked totally. The MMC zone, a comparatively recent development in Chhattisgarh, must not be allowed to grow and take roots. Any land-related or other potential issue that could be exploited by the Maoists should be timely addressed by the state administration. As soon as any area is secured from the Maoists’ influence it must be supplemented by development projects so that the probability of the outfit’s revival is eliminated.

Third, the secrecy of anti-Maoist operations must be maintained. The security forces must not fall victim to the Maoists’ ambushes, at least the deliberate ones. Though the forces are now equipped with better technology, more attention is required on the tactical side. The CMC, in a circular issued to their party members in July 2018, have warned the senior cadres not to choose ‘Tumirgunda-Kasanur’ (of Garhchiroli) kind of place for meetings since it is not suitable for a hasty retreat. Likewise, the security forces must plan their operations carefully with an objective to defeat the guerrilla tactics.

Fourth, the Maoists are taking advantage of social media to propagate their ideology and gain support of groups having similar leanings. The arrest of techie Abhay Devdas Nayak, a member of the ‘Coordination Committee of the Maoist Organisations in South Asia’ (CCOMPOSA), in June 2018 by the Bastar police shows that they are quite active on social media. They also use encrypted media to secure their internal communication. Since Kesava Rao is a technical expert, continuous monitoring of social media by security experts is essential.

The incident-free assembly elections, the first phase covering all eight severely affected districts of Chhattisgarh, indicates that the state, if equipped with sufficient manpower and infrastructure, can effectively deal with the Maoists. The killing of nine Maoists in November 2018 near Sakler in Sukma district shows that the guerrilla bases are no longer their secluded dens.

This momentum of the security operations and development work needs to be maintained. The Maoist leadership change will not affect the security forces on the ground. Now that the guerrilla base of the Maoist has shrunk, recruitment dried up, surrenders increased, PLGA and top leadership weakened; it is more of a cause for concern for Kesava Rao than the security forces who are determined to take the fight to its logical end.

(The writer is Special Director General of Police, Chhattisgarh. The views expressed are personal)