The Folly Of Believing Your Own Hyperbole

A tall-talking, myopic, mulishly Jan Sanghi BJP is ripe for a fall 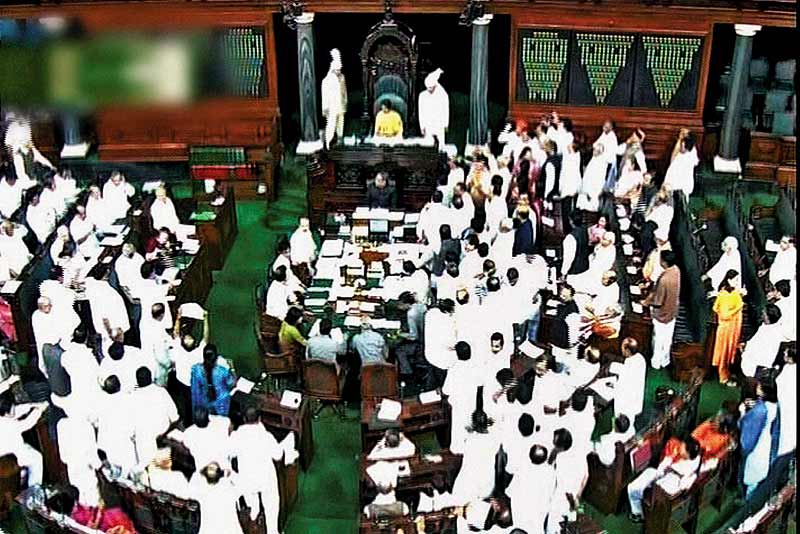 PTI
Harish Khare September 10, 2012 00:00 IST The Folly Of Believing Your Own Hyperbole

A cardinal principle of parliamentary democracy stipulates that “while the Opposition must have its say, the Government should have its way”. The Bharatiya Janata Party has no use for this adage. And it will pay a price for this. Delirious with its own boisterous performance, it insists it would rather risk majestic isolation than let Parliament perform its institutional duties. What hubris! Unthinkingly, the BJP has relapsed into its Jan Sanghi habits.

Let us go back a bit.

The last time the BJP came anywhere near garnering for itself a semblance of a national mandate was in 1999 when it had Atal Behari Vajpayee as its prime ministerial mascot and had a Kargil victory under its belt.

It is nothing short of a tragedy that this party’s leadership remains so uninterested in remembering why it was voted to power twice, first in 1998 and again in 1999. Nor is its leadership willing to ponder why it was voted out of power in 2004, and, again, why its claims to national mantle were spurned by the electorate in 2009, despite the tempting offer of prime ministerial pretender Lal Krishna Advani on tap.

Its obduracy about not trying to understand the reasons for the 2004 rejection made the BJP disrupt session after session; a preening Advani began preparing himself to take over as prime minister in 2009 as a matter of entitlement; he even went to Pakistan to reinterpret Mohammed Ali Jinnah and was promptly cut to size in his own party. And, when voters got the chance, they rejected the faux Iron Man and instead renewed their confidence in the ‘weak sardar’.

Crowded with prime ministerial aspirants, the BJP is unwilling to learn the lessons of 1999, 2004 and 2009 and has no new vision for the country. It is inviting another rebuff from the electorate.

In 1998, the BJP was given a chance because the polity was desperately in need for a political formation that could be a reliable substitute for the Congress and other third-front conglomerations, and which could answer the inescapable need for a working governing order in New Delhi. India had begun changing since the 1991 economic liberalisation process was set in motion; that, in turn, had produced for the first time a pan-Indian middle class that was unenthused by the old socialist shibboleths. Liberalisation had also empowered the corporate sector that now demanded that the politics produce sufficient coherence at the core of the Indian State. Atal Behari Vajpayee was the chosen one around whom a new order could be grafted. The corporate sector had plumped for Vajpayee precisely because he carried with him a promise to wean the BJP away from its Jan Sanghi moorings. India had had enough of the V.P. Singhs, the Chandra Shekhars, the Gowdas and the Gujrals. It was time for national sobriety, political responsibility and institutional equanimity.

Though himself a product of the Jan Sangh school of narrow nationalism and even narrower politics, Atal Behari Vajpayee presciently gauged the requirements of a changed country in a globalised economy. He  understood clearly that the new India was not interested in sorting out medieval animosities so central to the Sangh parivar’s catechism. Despite all the rhetoric of deshbakhti and protestations of shakti, he realised that the primary task of governance was social harmony, economic growth and peace with our neighbours. All through his six years as PM, he had to slug it out with the Jan Sanghi mindset in his own backyard and Advani’s prime ministerial ambitions. While he could largely put Advani in his place, Vajpayee eventually lost the battle in Gujarat. He left it too late in the day to make amends by seeking a rapprochement with General Musharraf in Islamabad in early 2004. While he managed to impress the country with his moderate approach to institutions of constitutional governance, he had to be voted out because he had failed to convince the majority that he could be trusted to safeguard our minorities and our social harmony.

The BJP today is overcrowded with prime ministerial aspirants. But these pretenders have yet to imbibe that those who seek to rule in Delhi have to demonstrate a stamina for prudence and gravitas. The country will not be too keen to entrust the New Delhi gaddi to those who glibly talk of “mota maal”  or dismiss Hamid Ansari as lacking the “stature” to be our president.
Curiously enough, even after eight years the BJP remains untutored as to why it has been rejected twice by the national electorate, though the same voters have been willing to vote it back in various states in assembly elections. Because of their failure to draw the appropriate lessons from 1999 victory and from its 2004 and 2009 defeats, BJP leaders have once again talked themselves into a state of such excitement that they are inviting one more rebuff from the electorate.

After all, thinking citizens do realise that there is something terribly wrong with the way our ‘economic reforms’ processes have virtually degenerated into  rampant crony capitalism; with dismay they watch how dubious ‘entrepreneurs’ have overnight become billionaires on thin assets, thinner credibility and competence and thinnest productivity. The Anna-fied electorate is looking for an honest answer to this problem: how to tame our rampant business houses into recognising and respecting the rules of a lawful society. The BJP is yet to enlighten the country that it has a different vision of how our economic aspirations will be achieved.

Instead, it has relapsed into its Jan Sanghi reflexes. All that the country has heard so far is that somehow the BJP is a party of more honest, better deshbhakts than in any other stable. This claim is hardly sustainable. Its state governments’ performance in Gujarat and Karnataka suffer from abominable aberrations and quasi-criminalities. The country is in no mood to give another bunch of political operators its turn at milking the system. The BJP is not entitled to any moral brownie points. It neither has a JP nor a Morarji Desai, nor even an Acharya Kriplani, who can help persuade the country to take seriously the party’s promise of closing the ethical deficit in our governance.

Nor can the country take kindly to any one group of leaders, however energetic and righteous its pretensions, that deliberately seeks to de-institutionalise  Parliament. The old Jan Sangh penchant for working the streets to try to overturn the electoral mandates is no longer an attractive democratic methodology. It is against India’s civilisational grain. P.N. Haksar reminded us that “the parliamentarians have to play the game according to the rules of the game, not by mere shouting. You stand up and argue your case—what is called vad-vivad is a sacred tradition in India. The great Shankara in the eighth century went all over India carrying out vad-vivad and he was not armed with any lethal weapons. So did Mahatma Gandhi and Nehru in my own lifetime.”

BJP leaders do not even want to remember that the country had frowned and eventually punished the Congress when Sonia Gandhi had teamed up with Jayalalitha and Subramanian Swamy in a futile endeavour to unseat the 1998 Vajpayee government. Today’s India craves constitutional equilibrium and institutional discipline.

India has changed even more dramatically since 2004, when the country turned its back on these self-proclaimed deshbakhts. If the BJP wants to curry favour with the India of 2014, it cannot possibly hope to do so with the faces and ideas and orientations that were nurtured way back in the Jan Sangh days. India has outgrown those times, but the BJP remains sadly mired in its own outdated habits.

If The Soot Don’t Wash