The Flag Is Chequered

India hosts its F1 race. But is it sport or business that takes the pole position? 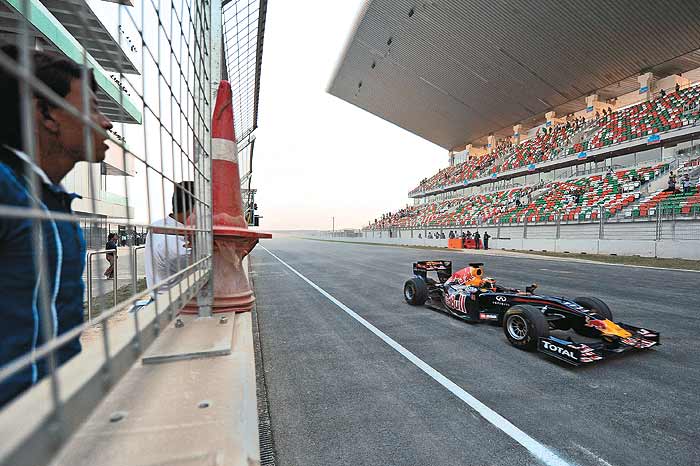 Lady Gaga in Noida! And Nicole Scherzinger and Jessica Michibata too! The first Indian Grand Prix Formula One race in the weekend—a private enterprise guaranteed to erase memories of the fiasco that the state-run Commonwealth Games was—got a media build-up more enthusiastic than even last year’s hockey World Cup. For, was not this the event that would wash away our shame? And help transform India into the sporting hub of South Asia?

For those not up to speed yet, Nicole Scherzinger, of Pussycat Dolls fame, is the companion of former F1 champion Lewis Hamilton, and Japanese model Jessica Michibata is his McLaren teammate Jenson Button’s. These girls make up the glamorous face of F1. The drivers are just faceless, helmeted men in spacesuits going around in circles. Drivers like Fernando Alonso of Red Bull draw $40 million a year in salaries, but the cars are the real deal—the cost to develop and maintain them is staggering. Top teams like Red Bull, Ferrari and McLaren spend between $300-350 million each year.

But then the dividends are good, too. Red Bull won the title last year and took home about £56 million and a hike in sponsorship as Pepe Jeans, LG and others piled onto the winner’s bandwagon. Indeed, F1 cars are the fastest billboards in the world, their drivers festooned with logos. If money and WAGS find first mention in a sports story, it has got to be F1. But then, one can debate: is F1 sport? Or is it business? And what is this business/sports event going to do for/to India?

It’s not a competition, pure and simple. “The cars aren’t equal, the rules aren’t equal for all. It’s not just racing; F1 is also very much business and with other interests,” two-time champion Alonso said earlier this year. Experts estimate that the car you drive is of 80 per cent importance in determining your performance. The quality of the car depends on the money you put into research. A very strong correlation exists between the amount of money spent and the points won by teams. Simply put, the driver who has the best equipment will do better than the others. This puts a question mark over F1 as sport. Extend this analogy to, say, cricket—it’s like a Ranji player being able to afford a bat which would ensure he’d score more runs than Sachin Tendulkar each time. In fact, the Indian government does not recognise F1 as a sport. 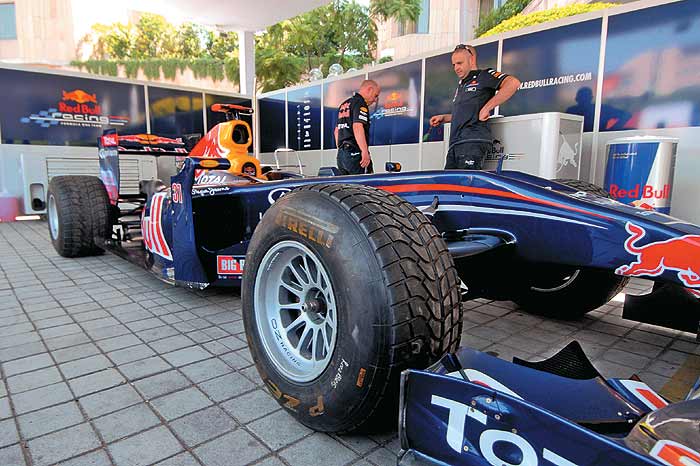 Built for speed A Team Red Bull F1 car being assembled at a Delhi hotel. (Photograph by Sanjay Rawat)

Akbar Ebrahim, India’s first formula racing driver, admits: “Well, that’s valid criticism.” However, he insists that it’s wrong to de-classify motor racing on the whole as sport. “I would not say motor racing is not a sport—when you are in a car, racing against 22 other people, it is a tough contest,” he says. “You are within millimetres of each other, it is very competitive, high-adrenaline, high-tension, and dangerous.” But Ebrahim agrees that F1, on the whole, is a business, elements of which are akin to sport. “Racing is part of a larger business structure,” he says. “Today, India is economically strong. They would not have touched India with a bargepole if it was what it was 10 years ago. Fifteen years ago, F1 boss Bernie Ecclestone would not have known where India is on the map!”

European F1 races were initiated due to passion for the sport. In emerging economies, it’s a bit different—it’s more about the prestige, marketing and glamour; the declaration of arrival. “You want to declare to the world that you have arrived, that you are part of the comity of rich nations,” says Novy Kapadia, academic and sports writer. That’s why F1 has roped in China, Malaysia, Turkey, Abu Dhabi and South Korea in recent years.

Kapadia feels that F1 is a throwback to the days of heroism and danger, like the chariot races in the Roman empire. The element of danger that pervaded racing’s early days has gone, but the glamour and the desire of the rich to buy into this world has survived, sharpened by a sense of business. Former hockey star Viren Rasquinha, who now runs a programme to help India produce Olympic winners, says while it could be called a sport because of the high levels of fitness and driving skills required, F1 is essentially business. “It won’t do anything for Indian sport,” he says. “I am not sure if it’s an investment into sport. It’s purely market-driven, for commercial gains.”

Analysts say all F1 teams make money—47 per cent of F1’s revenues, from a very large, worldwide free-to-air TV audience, go back to the team. It’s the organisers who need to find ways to make money. For instance, Jaypee will pay F1 management Rs 175 crore annually to host the race. They have spent Rs 1,700 crore to build the race track. Sameer Gaur, MD of Jaypee Sports International Ltd, hopes to break even in two-three years. “There will be other motor sports races like the Moto-GP, motorbiking, it can be given for training purposes, corporate events, so there are many options for revenue generation,” he said at the inauguration of the racetrack. Another revenue stream is to position their housing projects with integrated sporting facilities, which would include cricket and hockey stadiums, apart from their golf course.

The spectators will generate considerable revenue, with tickets priced between Rs 2,500-40,000. The prices reflect the growing exclusivity of entertainment and sports in India, as is the fact that the largest Hindi news channels aren’t accredited to cover the event—the organisers only want a certain kind of audience.

F1 has a considerable fanbase in India. While 66 million Indians watched the marquee World Cup final event in April, figures from 2010 show 25 million Indians watched the entire F1 season, all 19 races. It’s hoped that the numbers watching the still niche F1 will rise, that nationalism would rouse Indians: indeed, no other team is named after a country. But then, even Force India is an Indian F1 team only in name—with no Indian driver, no Indian component, not even an Indian technician or mechanic. It runs on Indian money, though, and perhaps in F1, that is of paramount importance.