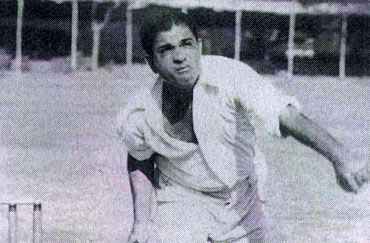 The middle of the 20th century was a turbulent time for India. There was the euphoria of Independence, the trauma of Partition, and all the extremes of emotion which come from being born. Proud of its freedom, uncertain of its place in the world, India also notched up its first Test victory, in 1952.

Sport is a vehicle for national pride, and cricket was India's most popular sport by the time of independence. While there had been a certain nationalistic fervour associated with football in the early part of the century - a Mohun Bagan v East Yorkshire Regiment match in 1911, which India won, went down in folklore as a metaphor for India's independence struggle - there were no such associations with cricket to start with. In much of its early cricket, India had been trying to impress its former colonial masters; now, it would have to beat them. And in February 1952, India won a Test match for the first time, thrashing England by an innings and eight runs at the Chepauk Stadium in Madras.

Although it took India almost 20 years to win its first Test, it had long been evident that it belonged on the big stage, and some of its cricketers had been acknowledged as being among the best in the world. CK Nayudu and Vijay Merchant were both named Wisden Cricketers of the Year, after they toured England in 1932 and 1936 respectively, and Don Bradman had heaped praise upon Lala Amarnath and Vijay Hazare in his book, Farewell to Cricket. And, of course, there was that classic first session of play in India's debut Test against England at Lord's in 1932.

England, led by Douglas Jardine, won the toss and opted to bat. Their openers Herbert Sutcliffe (54 Tests, average 60.73) and Percy Holmes. Just a week ago, the pair had added a then-world-record 555 for first wicket in a county game. India wasn’t fazed.

Within an hour, England was 19 for 3, with London on the verge of a paramedical emergency - the crowd at Lord's was in a state of shock. The men responsible for this were Mohammad Nissar and Amar Singh, arguably India's best new-ball pair ever Nissar, perhaps the quickest bowler in the world at that time, yorked Sutcliffe in the first ball of his second over, beating him with pace. Last ball of that same over, Holmes's off stump came out of its hole the ground and did a jig in the air, as did the Indians. Shortly afterwards, Frank Wolley was run out, and England were in trouble.

England fought back to win that test by 158 runs, but it served to underline one of India's great strengths at that time. During the 20s and the Bus, India had no spinners of note, and a fabulous pace attack. Nissar, Amar Singh, Ramp (Amar Singh's older brother) and Jahangir Khan were one hell of a quartet, even though all of them never played together in a Test. Indian batsmen -consider the irony - were known to be good players of pace, but inadequate against quality spin. But it was spin, not pace, that won India its first Test.

The captain of India for the 1952 series against England was Vijay Hazare, but the architect of the win in Madras was Vinoo Mankad. A left-arm spinner who had been described by former England captain Arthur Gilligan as being the best he had seen, "better than [Wilfred] Rhodes and [Hedley] Verity", Mankad turned in a performance in the first innings that, according to the Wisden Cricketer's Almanack, has ''seldom been bettered". England won the toss on a surface that was a batsman's paradise, and Opted to bat first. They were sailing at 65 for 1 when Mankad came on to bowl.

Flighting the ball as if it was a dervish in leather, he teased, coaxed and seduced his way to eight wickets, four of them stumped, as England was all out for 266. Pankaj Roy and Pony Umrigar then made centuries to put up 457 on the board for India, after which Mankad got back into action, taking four more wickets, as India won by an innings and 8 runs. Mankad finished with 12 for 108.

Mankad, interestingly, had begun life as a medium-pacer who took inspiration from Nissar and Amar Singh. However, he was convinced by his coach early in his career to switch to spin, as he did not have the build to be a pace bowler, and the die was cast. Not only did Mankad become India's leading bowler during his times, India didn't have any quality pace bowler by the time the century changed halves. The centre had shifted.

For 27 years after this win - until the emergence of a certain Kapil Dev spinners were the main wicket-takers in all 28 of India's wins. A succession of spin-meisters like Ghulam Ahmed, Subhash Gupte, Jasu Patel, Salim Durani and the spin quartet of the 60s and 70s won matches for indict. And, of course, Vinoo Mankad, the man who had shown the way on that cold day in February, with winter coming to an end.

To Bridge The Gulf