The First Law: Sing My Name 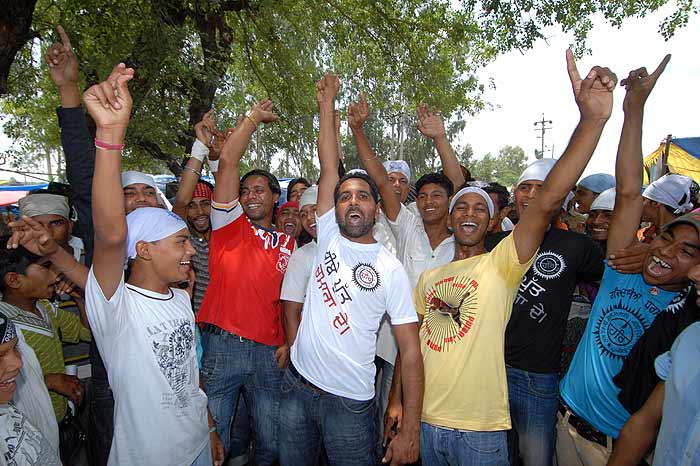 Some of the lyrics from the album ‘The Fighter Chamaar’

(When Chamars walk out with weapons in their hands,
Friends, watch how there will be fireworks,
Let's see who can cross our path)

(Ever since he took admission in a Chandigarh college,
He has begun keeping me at a distance,
This son of a Chamar who comes in a Hummer vehicle
Does not meet my eyes any more.)

—from the pop song ‘Hummer Chamar’

Calling someone a ‘Chamar’ is an offence for which the SC/ST Prevention of Atrocities Act, 1989, prescribes a jail term. So when activists, singers and preachers of the community in Punjab’s Doaba belt insist we address them as ‘Chamars’, it is with some trepidation that we do so.

“It’s our identity and it’s a caste like any other, with a rich past,” some of them tell us. “Far from being ashamed, we are proud of being Chamars.” The rest of the nation—including Chamars from other states—may cringe at the use of the word, used for those associated with the making of leather, and therefore considered “unclean” in the Hindu caste system, but in Punjab, they are all saying, “Garv se kaho ham Chamar hain.”

This is not easy in a society conditioned by centuries of prejudice. Dalits still change surnames to escape the caste label, and in rural Punjab, domination by upper-caste Jat Sikhs is common. But now, Jalandhar, in Punjab’s Doaba region, is being called the capital of Chamars. It’s from here that a new narrative has emerged for the community. Perhaps not surprising, considering that Kanshi Ram, the fountainhead of modern Dalit politics in the north and Mayawati’s mentor, was a Chamar from Ropar, just off what is officially called the Doaba region. Encouraged and funded by NRI Chamars and executed by increasingly committed groups of activists, ‘Mission Chamar’, as it is being called, is the talk of the region. It’s visible in slogans on T-shirts, on car stickers and with spectacular effect in the Punjab music industry, which has been inundated with a huge demand for Chamar songs.

The cry of resurgence and pride is most loudly heard in the numerous music albums brought out by Chamar singers.

About two years ago, Punjabi singers like S.S. Azad and Roop Lal Dhir began singing songs that glorify the Chamar community. Songs like Ankhi putt Chamaran de (These self-respecting sons of Chamars) and Hummer Chamar became instant hits with the community’s youth. But Azad recalls the difficulties he had to face while producing Ankhi putt. “Even though I’d got a good response to some of the songs while performing them on local stages, no one was prepared to produce the album or even feature in the music video. We did it all by ourselves, with some funding from our NRI brethren. I and my brother featured in the videos,” he says. Popular music channels like MH1 initially refused to air the songs or even the advertisement for these songs. But the songs became a rage online, with thousands of hits on YouTube and countless downloads. Incredibly, now even Jat Sikh singers are rushing to sing Chamar songs and cash in on the demand for them, says Roop Lal Dhir. But the state government is yet to wake up to this new trend—Jalandhar Doordarshan still won’t air their songs. “When I approached Doordarshan for my Chamar songs, I was told I should replace the word Chamar with sardar. They have no problem airing Jat songs, so why this discrimination?” he asks.

What really delights the young about these songs is the videos, which feature burly, well-built Chamar boys, displaying menacing biceps, wielding swords and guns. The macho portrayal is a clear attempt to bring themselves on par with Jat Sikhs, stereotypically thought of as strong and vigorous. Pamma Sunar, a singer from Phagwara, brought out Fighter Chamaar in January this year with daring visuals and provocative lyrics. “Our songs are a retaliation to the rash of Bhindranwale songs which came into the market two years ago, and the pictures of him on car stickers. It is a fight for equality and self-respect and already we are feeling the heat,” he says. Sunar, like other Chamar singers, is getting used to threats and abusive phone calls, allegedly from Jat Sikhs. 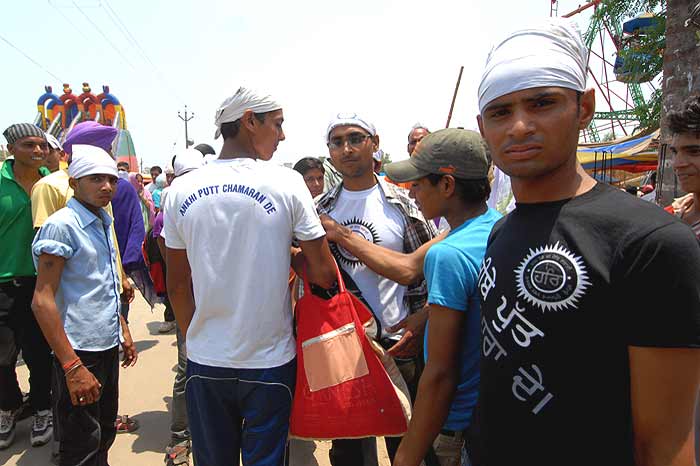 The assertion by Dalits in the Doaba region is not new: ‘Mission Chamar’ actually gained traction after the attack on Dalit guru Sant Niranjan Dass in Vienna in 2009, in which his deputy Sant Ramanand was killed by radical Sikhs. They belong to the formidable Dera Sachkhand Ballan on the outskirts of Jalandhar, widely considered the mecca of Chamars. The Vienna attack set off violent riots in Punjab and Haryana. “This incident shook the dominant Jat Sikhs and emboldened the Chamars, who till then were unaware of their own strength and capacity to dominate,” says Des Raj Kali, a prominent Dalit writer and editor of Lakeer, a Punjabi literary magazine. Punjab has the highest percentage of Dalits in the country: 28.9 per cent according to the 2001 census. In the Doaba, they have the largest concentration—almost 35 per cent of the population. In the last 50 years, they have pulled themselves up economically by getting educated and going abroad for work. Their houses here are grand and places of worship even grander. When Dhir went to Greece to get visuals of a Hummer for his video, the Chamar community there was so delighted at his songs that they offered to buy a Hummer to take to his village. “I thought it was an unnecessary extravagance, so they presented me with a car instead,” he said.

Most Chamars of Punjab are affiliated to the Ravidasi sect, which follows the teachings of Guru Ravidas, a 14th century Bhakti saint and a Chamar. Before the Vienna incident, they used to worship the Sikh holy book Guru Granth Sahib, which has some 40 shabads and one shloka of Guru Ravidas. Though Sikh gurus preached a casteless society, in practice Dalit Sikhs are not permitted to enter Jat Sikh gurudwaras or use their cremation grounds. In 2004, there was a violent clash in Talhan near Jalandhar when Dalits were stopped from entering the village gurudwara. Trouble also arose when the portrait of Guru Ravidas began to be placed at the same level as the Sikh holy book at Dera Sachkhand and other affiliated deras in India and abroad. Radical Sikhs objected and the Vienna attack on Sant Niranjan Dass is indicative of this unease within the Sikh community. This incident has been a watershed in the history of the community: soon after, Dera Sachkhand propounded a new religion, Ravidasi Dharam, for Chamars. Their holy book was called the Amrit Bani, which has Ravidas shabads and shlokas culled from the Guru Granth Sahib. With the dera providing religious leadership, many Ravidasis have severed links with mainstream Sikhism. “There was no place for us either in Hinduism or Sikhism, so we have formed our own religion, which revolves around the philosophy of Guru Ravidas. But we are for social harmony and do not want confrontation with anyone,” says S.R. Heer, the dera’s general secretary. He says there is no harm in extolling oneself as long as they don’t hit out at anyone, referring to the Chamar songs. “If official media like Jalandhar Doordarshan can broadcast Punjabi songs which sings praises of Jat Sikhs, the heavens won’t fall if Chamars talk of a separate identity for themselves.”

Some Dalit thinkers see ‘Mission Chamaar’ as risky politics. They say it alienates other marginalised groups.

And this Dalit resurgence in the Doaba is already taking on political colours. Paramjeet Kainth quit the BSP after 20 years to form the Chamaar Mahaan Sabha (CMS) last year. His group is busy educating people about Chamar heroes, who took part in the freedom struggle, played a stellar role in Sikh history and even in the Ramayana and Mahabharata. One of its demand is a Chamar regiment in the army. “It is our duty to educate our own youth about the glorious past of their ancestors so that they are never again ashamed of their identity,” says Kainth.

But some Dalit thinkers are apprehensive of this in-your-face muscle-flexing by their brethren. Kali sees the present trend as an attempt to divide the marginalised communities that includes Valmikis, Ramgarhias and Mazhabi Sikhs too. “If they are working towards a casteless society, then why do Chamars consider themselves superior to Valmikis? I am worried about what will happen if the marginalised rise against each other. Why don’t they work towards more education in the community instead?” he asks. S.L. Virdi, an advocate and Dalit writer, warns the ongoing Chamarvaad could spell trouble. “If Akalis lose the assembly elections next year, they will surely revive their agenda of asserting Sikh identity, which is bound to clash with that of Chamars,” he says.

But so euphoric is the mood within the community that few are willing to listen to the likes of Virdi and Kali. Leaders like Kainth, for instance, call them “fear-mongers” who do not want to change. “We are against words like Dalit, Scheduled Caste or Harijans, which are denigrating or condescending labels. We want everybody to just call us Chamars. Let us get on with our lives without the baggage of the past and that is that,” says Kainth. The popular call in Doaba right now is, ‘Bole so nirbhay, Guru Ravidas ki jai (Be fearless, hail Guru Ravidas).’