With a scary political prescription, its message is: Don't think too much, just get on with it 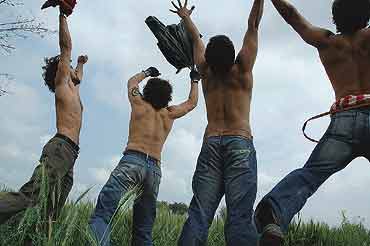 Pretty much everyone knows what the film is about. A bunch of hedonistic college kids agrees to act in a film, scripted by a young English woman, dealing with the lives of revolutionary nationalists led by Bhagat Singh and Chandrashekhar Azad. Their friend, Ajay, an air force pilot, is killed in a MiG-21 crash, prompting them to organise a peaceful protest against government corruption and inaction. The police brutally break up the protest. Inspired by the revolutionaries of the past, they decide to kill the defence minister. The assassination fails to ignite the public, so they storm into the studios of All India Radio (AIR) to publicise their plot and the iniquities of the Indian state. The film ends with their murder at the hands of the Rapid Action Force. The vacuous, hopeless young men at the start of the film have been transformed; they are now heroes, bearers of redemption.

Why should we worry about this storyline? For two basic reasons. First, the film's critique of Indian society and the Indian state is so superficial and simplistic it makes you cringe. Indian society is portrayed as embodying everything good: its people are open, honest, tolerant, affectionate, and, yes, in the end, patriotic too. The Indian state by contrast is everything bad: labyrinthine, corrupt, tyrannical and, yes, captive to odious, kleptocratic politicians. India's democracy—one of the miracles of the modern world despite its frailties and violence—appears as a sham, a cover for hard men and women who rule ruthlessly.