Nike got it. Reebok stole it. It's not all fun and games in the fierce sportswear arena. 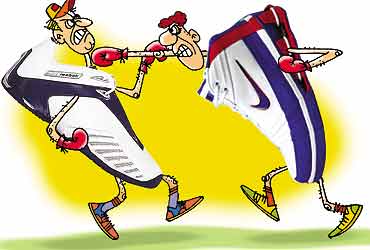 outlookindia.com
-0001-11-30T00:00:00+0553
Both in cricket and business, numbers often tell the real blood-and-gore story. An example that hints at another high-decibel, no-holds-barred and aggressive marketing battle between high-flying MNCs—Coke vs Pepsi—is the financial bids that were received by the Board of Control for Cricket in India (BCCI) in December 2005 from firms that aspired to become the official kit suppliers for Team India for the next four years. It finally ended in a tussle between the three global sportswear giants—Nike, Adidas and Reebok. (Although Reebok is Adidas' subsidiary, it operates globally as a separate entity and as a rival firm.)

Nike—which opened its India office just a year back after having a proxy presence here through its distribution tie-up with a local marketing-and-distribution partner, Sierra—outbid its better-entrenched rivals Adidas and Reebok and agreed to cough up nearly Rs 200 crore. Adidas' bid was much lower at Rs 128 crore, followed by Reebok's Rs 119 crore. For Nike, the leading sportswear-maker in the world with annual revenues of nearly $14 billion in 2005, it turned out to be a huge victory. The company had been worried about its minuscule presence in one of the fastest-growing markets. Earlier this year, its former CEO William Perez identified India as a major growth driver. Nike realised that the best way to make a mark in India was to ride the cricket bandwagon, especially just before the much-publicised and avidly-awaited Indo-Pak series.

Even while it was celebrating the bagging of Team India's sponsorship, Nike realised that the Indian market will turn out to be a highly competitive one. The existing players will fight tooth and nail before giving an inch, and it may just turn into a never-ending fight to the finish. Being the official kit supplier, Nike immediately flew its marketing head, Sanjay Gangopadhyay, to meet the Indian team in Pakistan to understand its "kitting needs" and explore various opportunities of long-term tie-ups with individual players. "The response from the players was quite amazing. They were keen to know the kind of products we had that could help them enhance their performance," says Gangopadhyay.

But as soon as the Indo-Pak Test matches began, despite the Nike 'swoosh' being emblazoned on the arms of the Indian players, it was brand Reebok that stole Nike's thunder. The reason: Reebok—which had signed up seven Indian players including the captain, Rahul Dravid—persuaded promising youngsters like M.S. Dhoni, Harbhajan Singh and Irfan Pathan to sport the Reebok logo on their bats, pads and gloves. As luck would have it, Dhoni and Pathan starred with the bat. Both Adidas—which has big guns like Sachin Tendulkar and Virender Sehwag as its brand ambassadors—and Nike concede that such conflicting turfs are part and parcel of the fierce and competitive sports business.

In the Rs 700-crore Indian premium sportswear market, Reebok is the leader with a marketshare of 45 per cent, followed by Adidas at around 25 per cent. After Adidas acquired Reebok globally for $3.8 billion in September 2005, the combined share stands at 70 per cent. In comparison, Nike, which is bigger than Adidas-Reebok globally, has been faltering despite being present in India by proxy for nearly a decade. The reason: Nike's local marketing-and-distribution partner, Sierra, was unable to commit huge sums. Now Nike has decided to do away with this hindrance and to invest on its own in India and, according to sources, is armed with a war chest of over Rs 500 crore.

"The market explosion is only just happening. We believe that we have entered the Indian market at the right time," says Sanjay Mehra, general manager (south Asia), Nike. Agrees Arvind Singhal, chairman, consultants KSA Technopak, "A lot of numbers regarding India have been over-hyped. For multibillion dollar global players, it is a question of priorities. Being a late-comer in a fast-growing, albeit small, market like India is no big deal for Nike." 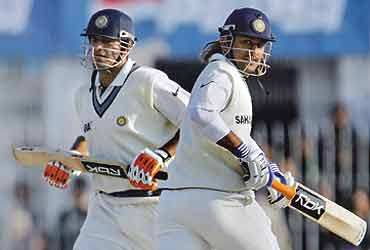 If you are wondering why the sportswear giants made a big fuss about cricket celebrities' endorsements in India, it's because the success or failure of such deals have made or broken their global fortunes. A David Beckham endorsing Adidas goods is a sure-fire guarantee for higher product sales, not just in England but all across east Asia. Italian sportswear firm Fila remained a dominant player in the 1980s as its sales piggybacked on the sporting success of tennis icon Bjorn Borg, who was, at that time, the brand's ambassador. But soon after Borg's exit from professional tennis, Fila lost its edge and was pushed out to the periphery by its competitors. This explains why, relatively, sports lifestyle firms spend disproportionately high sums on marketing, advertising and endorsements. While the expense on such items is less than 15 per cent for FMCG firms like Unilever and p&g, the figure for sportswear companies like Nike and Adidas is 25 per cent.

A decade ago, in its bid to retain its numero uno position, Nike had signed on the hottest football property—the Brazilian national team—for a whopping $200 million. Nike executives in India don't miss the parallel between the Brazil deal and the deal with the Indian cricket team. "We were nowhere in the football business. Now we are right on top. Here, too, the sky is the limit for things that we can do with Team India," says Mehra. But will the Team India deal translate into higher sales for its products?

Several experts think the answer is no. "In India, the market for cricket merchandise is non-existent. Even among the youth there is no big craze to wear the Indian colours except, for instance, when somebody is actually going to the stadium to watch the team play. If Nike has factored in (higher) merchandise sales in its Rs 200-crore deal, then I'm not too sure they'll succeed," explains KSA Technopak's Singhal.

Add to that the fact that competition too is gearing up to take on Nike. Andreas Gellner, the MD of the Germany-based Adidas, has also identified India as a growth market and feels that she can convert India into Adidas' third biggest arm in Asia, after China and Japan. "The business environment here is certainly very positive. If everything goes well, India could be our number three market in Asia, and that is my present mandate," Gellner said.

But the Adidas' top brass realises that the Indian market is quite different from others in southeast Asia. Therefore, they need to devise specific strategies to expand operations here. In addition, they plan to allocate higher budgetary resources. In the next two years, Adidas plans to set up 60 exclusive showrooms, in addition to its 75 existing ones in India's top 10 cities. It is also planning to triple its advertising expenditure in the same period. Another indicator of the importance of the Indian market can be gauged by the fact that the Indian subsidiary has been separated from the parent's south-east Asia business cluster and the Indian management now reports directly to the regional headquarters in Hong Kong.

Reebok, Adidas' global subsidiary, too, expects to grow rapidly in India and achieve a turnover of Rs 500 crore by 2007. "We hope to keep growing by 50 per cent annually," predicts Subhinder Singh Prem, MD, Reebok India. In November 2003, Reebok India was also recognised as the parent's best subsidiary since it is only in India that Reebok is ahead of the traditional global rivals, Adidas and Nike.

So, over the next few months, it will be a race between the trio to grab as many celebrities as possible to endorse their brands. Especially for Adidas, which was desperate to get the cricket sponsorship rights. In the past, Adidas has found it difficult to sign more cricketers, apart from Tendulkar and Sehwag, but now, it will go all out to woo them. The German company also lost in its attempt to sign on tennis star Sania Mirza (who was bagged by the Italian firm, Lotto). With such defeats, Adidas as well as Reebok are likely to put their best foot forward to outpace Nike.