It's no mere vanity bag they carry these days. Top jobs have made women rich, infusing egalitarian gender equations in the economy. 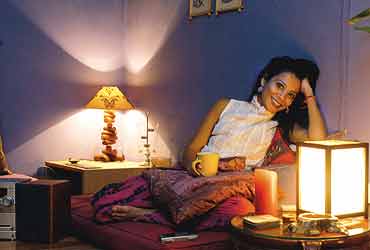 Thirty-six-year-old Sangeeta Kuriakos loves to live life queen-size. She owns a splendid studio apartment in South Mumbai, shops for designer clothes, shoes and bags at Delhi's plush 1 MG Road, and loves collecting the works of unknown artists at Mumbai's Kalaghoda festival. She earns quite a packet as the CEO of Clea Public Relations, and hates to save. "I would rather blow up all my money on single malts," she says. Kuriakos represents the new spender on the block who is every marketer's dream. But there are thousands of other women whose shopping list has now grown to include home loans, stocks, mutual funds and SUVs. The market's awareness of this new spender and her potential is growing, as manufacturers and ad campaigns increasingly target her. Evidently, banks are queueing up to woo this new customer who not only has money, but also a reputation for being more reliable than men when it comes to repayment of loans and credit card bills.

A look at recent market surveys reveals that the home loan market for women has jumped from Rs 9 crore in 2001 to Rs 24 crore in 2004. There has also been a sea-change in the attitude of financial institutions over the past few years. In 1999, architect Rehana Bakshi (name changed on request) had applied for a loan of Rs 10 lakh for a flat in Gurgaon. Despite her well-paid job and an impressive bank balance, the bank officials were most reluctant to sanction the loan. "I was unmarried then, and they were sceptical about whether I would be able to pay back the loan after getting married. What if I left my job, they asked," recalls Bakshi.