Decentralisation will be the key issue in the election of the next pope. The regional bishops' conference want a greater role. 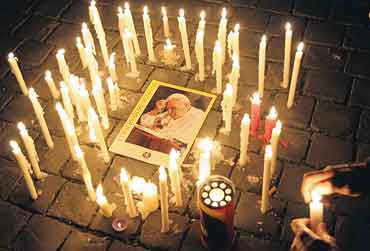 outlookindia.com
-0001-11-30T00:00:00+0553
Papacy too can be in the eyes of the beholder. A widely scattered following of 1.1 billion joined together in tears and mourning over Pope John Paul II but through his 26-year reign it never looked at the pope with a single vision of unqualified acceptance. Those differences are set to surface now in expectations of a new pope and over just what the Vatican must mean to Catholics living in quite different worlds around the globe.

Above these differences hangs a single question: whether the Church needs a council or the flock needs a father. John Paul II was the father figure, and much loved by hundreds of millions of his followers for being so. That position brought the Church much strength. John Paul II reached out historically to Muslims. He became the first pope to visit a synagogue, he apologised publicly for the crimes of the Church. He opposed the death penalty, the Gulf War of 1991 and the invasion of Iraq in 2003. He called globalisation "a new form of colonialism".

And he reached out to people of the faith as no other had, with a total of two years spent away from the Vatican, equal to about 29 trips around the world. Until 1963 no pope had left the Vatican, the seat of the Catholic Church in Rome.

But to many, the other face of this strength was too much authority in the hands of one man. They wanted from him and they will want from a new pope a movement towards decentralisation, in some ways even a de-Vaticanisation of the Church that had begun in the 1960s through what came to be known as the second Vatican Council.

The first Vatican Council was held in 1870 after the pope lost his virtual position as king of Italy. Pope Pius IX then set out the doctrine of primacy of the pope under which every papal decision is infallible and immutable. Pope John XXIII sought to change much of that through the second Vatican Council that began in 1962 and which continued until 1965 under Paul VI.

"It was a period of great euphoria and great hope," Maureen Fiedler from the Washington centre of the group We Are Church told Outlook. "Theologians felt free to develop ideas and publish new work. Priests, nuns and the laity read messages of justice that came from the second Vatican Council. Women found a greater role in the Church, bishops had a greater say in their dioceses." But the influence of the second Vatican Council declined over the remaining period of the papacy of Paul VI (1963-78) and all but vanished after John Paul II was elected pope in 1978, and both doctrinal and administrative decisions came to be taken by the pope and the Roman Curia (the Vatican administration).

Despite widespread admiration for an ageing but always youthful John Paul II, opposition to a concentrated centralisation of Church powers in the Vatican never died down. Adista, a Rome-based Church watchdog, released a report in 2003 to mark 25 years of the pope's reign that it called "the jubilee of repression".

The lengthy report records several instances of strong dissent such as the Cologne Declaration by German priests in 1989 against the Roman Curia for ignoring local churches in appointing bishops. On June 24, 1998, the Vatican issued a notification that Indian Jesuit Anthony de Mello had supported "positions incompatible with the Catholic faith" in his works. De Mello had already been dead for 11 years. A year earlier, We Are Christ brought a petition to Rome signed by 2.5 million asking for reforms such as more role for women, optional celibacy for priests and more involvement of local churches in decision-making. The pope maintained that "the Church is not a democracy".

His critics have brought Western liberal values to bear on an institution of faith. A conflict between liberal demands and the conservative tradition is certain to inform the selection of the new pope and the new papacy.And perhaps no pope can meet the sort of demands usually described as liberal.

"The Gospel is neither conservative nor liberal," father Sebastian Karamvelin, a Keralite priest with the Society of St Paul in London, told Outlook. "The pope cannot go against what is in the Bible. The pope cannot promote homosexuality or abortion or any of those things. There is a lot of hype here. The pope is the vicar of Christ, he has to say what Jesus Christ would say. He has to listen to God before taking decisions, not to the media."

Catholics in India have had very little sympathy with such opposition to the pope, father Sebastian said. "Our ethos is totally different," he said. "We don't spit on the plate from which we eat. We do not dishonour our father. There have been very few dissidents, and the Catholics in India are not involved in these matters in the West."

Feminists will ask for ordination but this has not solved problems in other churches, father Sebastian said. But he too said that now "some progress will be necessary in doctrinal aspects because times are changing". That may mean among other things more positions for women in the Church, he said.

And the Church would need greater decentralisation under a new pope. "Whether it's the church in south India or Africa, they need greater freedom to choose and develop their own ways of worship," Sebastian said. "There needs to be greater decentralisation through the bishops' conferences. Rome can take the fundamental decisions but not day-to-day responsibility; that should be the bishop's responsibility." Bishops' conferences are regional groupings where bishops can take decisions on local church practices.

In the run-up to the election of the pope due between April 18 and 22 by the college of 117 cardinals, campaigning has begun already for a greater role for regional bishops' conferences under a new pope. "We strongly believe in decentralisation and not centralisation," Carmine Curci, chief editor of Nigrizia, a Rome-based magazine supporting the African church, told Outlook. "We are looking for more authority to be given to the bishops' conference in Africa."

The voices of Africa and Asia matter, more than any others perhaps, because these are the two continents that have seen a rise in the number of Catholics. The numbers of the faithful have declined substantially in the West in recent years; also in Latin America which is still home to about half of all Catholics. That trend is not reflected in the Church hierarchy of bishops, archbishops, cardinals and finally the pope. Asia, Africa and Latin America provide only 44 of the 117 cardinals who can vote. The Roman Curia is dominated by Greek-Roman theological and ecclesiastical thought. The Church authority and the following speak differing languages culturally within a religious oneness.

This has led to much speculation about Asian or African names among the 'papabili' or the 'pope-ables', though none of India's three cardinals among the five who are under 80 and therefore entitled to 'contest' or vote is considered the next likely pope. But the next pope will probably be of the views John Paul II held dear; all but two of the cardinals who will select the new pope were appointed by him. So are 70 per cent of all bishops. But they are still likely to press for more regional authority.

But there is only so far that collegiate ways can replace a father figure that millions of the faithful will need in bad times and want with them in good ones. John Paul II faced a good deal of liberal flak for the conservative principles he enforced. But he had an unexpectedly huge following among Catholic youths the world over. His last words were almost to thank them for coming to him at St Peter's Square as he had reached out to them earlier.There always will be issues with a father, even the supreme Father. But the young might yet make the liberalists look old. And faith could return once again to a matter between the flock and the Father.

That Gleeful Snuffle In The Grass