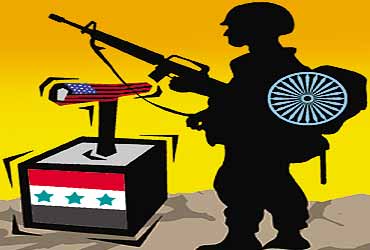 outlookindia.com
-0001-11-30T00:00:00+05:53
I would like to begin by apologising to readers for returning yet again to the question of whether India should send its troops to Iraq or not. But the situation in that country is changing rapidly, and for the worse. To send Indian troops now—without knowing what they will be called on to do, how long they will have to stay, and when and how their task will be completed—would be to push many of them to a pointless death. The Bush administration has been at pains to assure India that its troops are needed to "stabilise" Iraq. It has not spelt out what 'stabilisation' involves, but it is one of a family of terms, like that much overused 'equilibrium', that give the impression that there has been a 'disturbance' which is in any case subsiding but which can be made to subside more quickly with a little judicious assistance.

Given this bias, it is not surprising that only serious incidents involving 'coalition' casualties get reported by the major international media, and these too are reported with a heavy 'spin'. For instance, when on June 24 at a town close to Basra a mob of angry Iraqi Shias killed six British military policemen, the bbc reported that the British government had called it an "act of murder". In what may have been a related incident, the mob fired upon a helicopter gunship and wounded seven more soldiers, three of them seriously. bbc live footage of the town taken hours afterwards showed people beside themselves with rage asking the British and Americans to leave Iraq. What the bbc did not tell us was that the military policemen had fired into a mob of demonstrating Iraqis demanding an end to the occupation, and only then had the mob stormed the police station. Americans admit to having lost 18 soldiers in guerrilla attacks since May 1, when the war was officially declared ended. But a detailed examination of a US defence department website which lists all US armed forces' casualties shows that the real number is 23. In addition, there are about nine persons killed in what are described as explosions in 'non-combat' situations, a suspicious classification at the best of times. Nor is much being said about the scores of soldiers who have been wounded in some of these attacks.

One has to read news reports from Iraq very, very closely to get an idea of what's happening, attacks being one of the increasingly organised resistance tools against the occupation. Those which are reported are only a fraction of the true number taking place. Minor attacks, in which there are no casualties, are not being reported at all. One of the major news agencies reported at the beginning of June that there were up to 25 attacks a day. Iraqis have not turned over their weapons to the Americans as they were required to do. By the deadline of June 15, less than a thousand pistols, revolvers, Kalashnikovs and machine guns had been handed over in a country where there are an estimated half a million weapons still in private hands.

Attacks on American and British soldiers are only one element of the resistance. When two explosions in oil pipelines on successive days greeted American efforts to start selling Iraq's oil from the Turkish port of Ceyhan, the US was unable to keep it out of the news that such sabotage was a regular affair and had already seriously delayed the resumption of oil extraction from the oilfields. American spokesmen conceded that as a result of this it would be two years or more before Iraq began to pump out its pre-war two million barrels a day.

Power transmission systems are another high priority target. In Baghdad, US administrators admitted that sabotage was one reason why the availability of power had dropped from 1,300 MW at the time of the invasion to 800 MW last week. The third element of the resistance is a growing number of attacks upon Iraqis who are working with the British and Americans.The purpose of these attacks is obvious: it is to prevent establishment of any civilian government run by Americans.

It is doubtful whether many responsible Americans still believe that they are perceived in Iraq as liberators. But the pattern of events in Iraq is one that we are familiar with for we have faced it in Punjab, Kashmir and earlier in Nagaland and Mizoram. India must not harbour any 'American' delusions. Iraq has not been liberated, but invaded and occupied. The Iraqis know it, resent it and are preparing to resist it. If India sends its troops to Iraq now it will be as part of an occupation force. Stabilisation will mean repression. Policing will be the new euphemism for counter-insurgency operations. Indian soldiers will be fired upon. And they will fire back. We will end up as the mercenaries of the new American Empire.

If Indian troops enter Iraq, Iraqis must see, and believe, that they are doing so to restore self-rule and not to perpetuate oppression. New Delhi must require, as a prerequisite for its participation, that the Americans announce a clear time-table—a 'roadmap'—for the restoration of self-rule to Iraq. This time-table cannot be of five years or more as a delegation from the US Congress said the other day.

Democracy cannot be imposed upon Iraq from above, as Mr Paul Bremer seems to be trying to do. It must be built up from below. The first step must be the holding of local elections within, at most, six months. The framing of a constitution and the holding of general elections under it can be left to the elected representatives. That is the technique India followed in Punjab, Nagaland and Mizoram, and most recently, in Kashmir. It is the only one that will work in Iraq.

Why We Should Say Yes