A woman in love with a wild boar? Unable to cope with forcible separation? This is not mythology, but a signifier of the Adivasi credo of life. 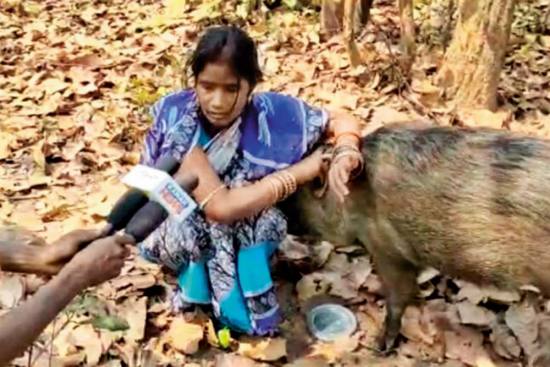 She didn’t squeal like a stuck pig but really got sick when her dear Dhud was taken away. The next few days, a near-delirious Kuntala Kumari Penthei scoured the jungle, calling him aloud. Dhud was found a week after the separation. She gave him rice and he ate hastily, with snorts of contented approval. They walked back home, though Dhud was limping. The reunion was like a pig in clover for both—a tribal woman of Purushottampur village in Odisha’s Keonjhar district and the pet wild boar she raised after finding him abandoned in the forest two years ago when she had gone for firewood.

Kuntala named him Dhud and became his foster mother. She cared for him like her children, feeding him rice, lentils and vegetables. With plentiful love and aff­ection, he ­became a member of the Penthei household. But this came to an abrupt end on March 11 when forest department ­officials forcibly took away Dhud since the wildlife ­protection law doesn’t allow anybody to keep a Schedule-III animal as a pet. Kuntala pleaded with them, but they would have none of it.

Having “rescued” Dhud, the officials released him in the wild as per rules. But Kuntala just could not reconcile ­herself to the separation. Every morning, she would go to the forest carrying Dhud’s favourite rice dish and spend the better part of the day searching for him.

Their love story didn’t go unnoticed and it headlined on television. A person saw a boar limping in the Kamalanga forest range, nearly 25 km from Purushottampur, and ­having watched the TV special, he informed Kuntala about the animal. Kuntala and her daughter, Rajashree, ­immediately set out for the place and, a few calls later, they found Dhud emaciated and limping. Once he regained some strength, he followed his foster mother back to Purushottampur....