The Fag End Of Fortune

The apex court rules against luxury tax and for the tobacco industry, but the relief may well be shortlived. 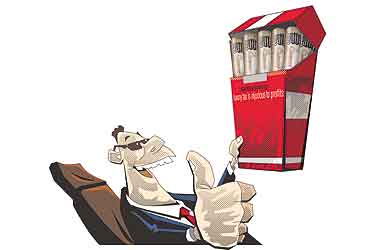 outlookindia.com
-0001-11-30T00:00:00+0553
On January 20, the Supreme Court handed Indian tobacco companies the biggest windfall they have had in many years. Within 45 minutes of the court announcing its verdict, tobacco share prices were bound northward. ITC, the market leader and the biggest beneficiary of the ruling, saw its price jump by 11 per cent, and nearly single-handedly powered the Sensex up by 100 points from the day's low. Godfrey Phillips India (GPI) rose 7 per cent, and GTC Industries nearly 18 per cent.

The Supreme Court verdict ended a 12-year-long legal battle fought by tobacco companies in various state courts. It has ruled that the imposition of luxury tax on cigarettes and gutka by 10 states was illegal. These states—including Maharashtra, West Bengal and Delhi—had imposed a luxury tax ranging from five to 20 per cent on cigarettes and gutka. The states' move was challenged by the companies as early as 1992 when Maharashtra imposed the tax. Tobacco marketers including ITC, vst Industries, GPI and CST Industries filed writ petitions challenging the imposition of the tax. Apart from this, 14 civil appeals were also filed.

The tobacco industry's contention was that cigarette products were already subject to central excise and the revenue collected was shared between the Centre and the states on the condition that the latter would not impose sales tax on them, as per the recommendations of the various finance commissions. Indeed, as finance minister in the mid-1990s, Dr Manmohan Singh had written to the states saying that the luxury taxes imposed by states violated Centre-state agreements, and the states should either desist or forego part of the money they get from the Centre. The apex court upheld this and said that the states had no legislative competence to enact a law to impose luxury tax.

Since the matter was before the courts, companies like ITC had made provisions for the payments every year, in case the ruling went against them. Says a top official from a tobacco company: "If we had lost the case, we would have been compelled to pass on the burden to end-users." In ITC's case, the company had made provisions of around Rs 600 crore over the years. That money is now free and gives the company greatly enhanced financial flexibility.

Investment bankers estimate that ITC pays about 6 per cent of gross cigarette turnover as luxury and entry taxes. The Supreme Court verdict could add 20 per cent to the company's profits every year. Says Nikhil Vora, senior vice-president at sski Securities: "ITC now has a robust cigarettes business devoid of any pressures. We see the settlement of the luxury tax issues as a significant positive, not just for the moneys involved but the direction."

While state government quarters feel that such levies were justified to cut down tobacco consumption, the industry is of the opinion that these taxes never achieved their purpose. According to the industry, the punitive taxation at the central and state levels over the years has not reduced tobacco consumption but led to a progressive migration from cigarettes to other tobacco products. In fact, despite the share of cigarettes falling from 23 per cent in 1971 to below 15 per cent now, overall tobacco consumption has not seen a similar decline. Says Sundeep Kumar, senior vice-president, GPI: "In India, people just shift to other forms of tobacco like bidi and chewing tobacco where such taxes don't exist. If you have to tax tobacco, do it on all products. This kind of an imposition will only lead to distortions."

But while the reaction to the ruling was visible at the markets and company quarters, Amitabh Chakraborty, head of research at Kotak Securities, sounds a note of caution: "I do think that the impact of this judgement will get undercut a little in case the VAT gets imposed on cigarette manufacturers as well.Although VAT is not currently going to be imposed on cigarettes, we think it may change next year. If that happens it will add 4 per cent on factory price and 2 per cent on retail price." And that could be back to square one for the smokemakers.