Islamabad's haste is part about scoring brownie points, part about no-blame if the talks fail 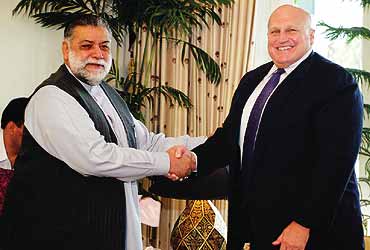 outlookindia.com
-0001-11-30T00:00:00+0553
The most tangible outcome of New Delhi's peace overtures has been the advertisement it's provided to Pakistan's nascent, controlled democracy. It isn't only Vajpayee who talks to Pakistan PM Zafarullah Khan Jamali; even US secretary of state Colin Powell dials him, in stark contrast to the earlier norm of Army HQ fielding such hot calls.

Obviously, democracy isn't the determining factor underlying Islamabad's enthusiasm. The breakneck speed at which Pakistan has moved can be gleaned from the measures it announced—trade concessions, a willingness to upgrade diplomatic relations and renew road, rail and air links. India's tentative response willy-nilly conveys the impression that Pakistan is in a tearing hurry to normalise relations with India.

Says Senator Mushahid Hussain, who was involved in Vajpayee's Lahore yatra, "It's true there's a lot of enthusiasm. But I wouldn't use the word hurry. No one sees an instant solution to Kashmir but everyone is talking about normalisation of relations." However, Dr Shirin Mazari, of the Institute of Strategic Studies, says Pakistan's effort is to initiate composite dialogue now that a window of opportunity has opened. "We are not in a hurry, we are not going to have solutions for the sake of solutions. You have to have full diplomatic ties before you even begin on other issues. New Delhi can't pick and choose. You need to link all these to talks," she says.

In other words, everything is a bargaining chip. For instance, Islamabad is in no hurry to accord overflight rights to India, believing New Delhi is desperate as it attaches significance to flights from India to Afghanistan. Currently, such flights take a circuitous, expensive route. Sources say this perception is based on intelligence reports emanating from Kabul. But ex-defence secretary Gen (retd) Talat Masood cautions, "Pakistan should allow overflight facilities. Nothing should be done to vitiate the environment."

Much of the cussedness is posturing. Jamali can't alienate the hawks with announcements on how he proposes to address India's concerns on terrorism. And New Delhi isn't expected to yield anything substantial unless Pakistan tackles this issue. Masood is hopeful: "Since Vajpayee started the current process without any preconditions, a lot of work is going on behind closed doors."

Others, like Hussain, feel Pakistan has curbed cross-border infiltration, citing the Indian army chief's comments 10 days ago to bolster his point. "Vajpayee is simply playing to the gallery. He knows Pakistan alone can't be held responsible," he argues.

Perhaps Pakistan's ostensible haste is also because of the brownie points out there for the scoring. Nothing illustrates this more than Pakistan's proposal to India that South Asia be declared a nuclear-free zone. This has been compared to Syria's proposal to have a WMD-free Middle East, aware as Damascus is that Israel will not dismantle its N-programme.

These brownie points are important because Kashmir and cross-border terrorism will, sooner than later, cast its shadow on all initiatives. This was palpable at the joint press conference of US deputy secretary of state Richard Armitage and Pakistan foreign minister Khurshid Mehmood Kasuri. Asked to comment on the core issue of Kashmir, Armitage said, "One side will say that it is a core issue. From India, they say the core issue is one of hostility."

Armitage was ambiguous about India's role in stopping infiltration considering the massive army it commands. "I don't think I should point fingers at Pakistan and India. The interlocutors cannot describe if a side has done enough," he said, adding, "A series of political and economic confidence-building measures have to take place between the two states."

It was Kasuri who defined Pakistan's interests. "We want to initiate a process," he said, "but any solution that does not take Kashmir into consideration cannot last. We would like to go into a tiered dialogue which addresses all issues."

Pakistan's seeming haste is an insurance against being held responsible for any failure to register progress. For Islamabad, it is ultimately about looking reasonable without compromising the country's interests (read Kashmir).