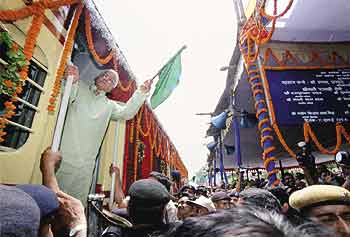 Union railway minister Laloo Prasad Yadav’s "people-friendly exercises" wherein he conducts surprise "inspections" at stations in the state has rail officials in a tizzy. Last fortnight saw yet another of these impromptu skits, with Laloo arriving at Danapur station and ordering that freight on the New Delhi-Guwahati Millennium Goods Express be weighed afresh. The harried rail staff began the whole exercise again with Laloo holding court, sipping some kulhar ki chai. Now since Danapur didn’t have enough weighing machines, the rail minister hit upon the idea of diverting the whole freight train to Andal (Asansol) in West Bengal where the weighing could be done. At the the end of the day-night exercise, it was revealed that 517 tonnes were loaded when only 505 tonnes were shown as booked. The railways had lost Rs 20,000 in freight charges for the 12-tonne difference. No costs have, however, been divulged on what the whole evaluation process cost! The staff’s excuse is that freight is loaded at an ‘estimated’ weight without actual weighing, so some differences are bound to crop up.

Another pet project of Laloo has been the metro-style train for Patna, set to roll on an 1862 railway track. The railways was given 15 days under an ‘Emergency Plan’ to set the new train on track. The Shaheed Express was finally flagged off with much fanfare on its eight-km run across Patna city. After the initial fuss, the train has very few takers now. Says Jitendra Prasad, station manager at R Block station: "We sell a maximum of Rs 2,000 worth tickets a day and it’s an eight-coach train with 450-500 passenger capacity. We hardly cover the cost of the diesel to run the engine." He also admitted maintenance costs and staff expenditure was not less than Rs 10,000 a day. Danapur DRM K.B.L. Mittal echoes the view, saying the Shaheed Express was not a viable proposition and was only adding to the railways’ losses.

The Web Welcomes All