The End Of An Affair

As with any institution, the Rajya Sabha too has been marked horribly by time 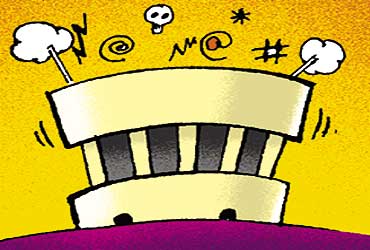 illustration by Sandeep Adhwaryu
Kuldip Nayar September 08, 2003 00:00 IST The End Of An Affair

outlookindia.com
-0001-11-30T00:00:00+0553
Can you really paint the sunset? Van Gogh, that great painter, once upon a time, tried to do so. He gave up. Not only that, he committed suicide. It is difficult to be in the presence of departure—its enigma is intact. And absolute. The moment of goodbye brings with it a sorrow you cannot describe, often cannot handle. There is a profound sense of loss. Wherever you have lived or worked, you leave a bit of yourself behind. Astonishingly, even in the murky realm of politics. I was in the Rajya Sabha for six years.

At first, its members—my compeers—were mere names. Then they got faces. By the time I bid farewell to the House, most of them were friends. In terms of group traits, I found them rather different from what I'd seen of them when I covered the House from the press gallery some 35 years ago. The members were then made of sterner stuff and loomed tall. They were not so riven as they are today, nor as prone to rancour. For them, things didn't need to be just black or white. Polemics was a game enlivened by shades of grey. They would try and work on these grey zones so that the area of agreement became wider and the gulf between ideas was minimised.

In a general comparison, the current members—mostly creatures of party, politics and power—offer an impoverished profile. In the past, members frequently defied the party and spoke their mind. Some, like the Young Turks, wouldn't even baulk at criticising their party openly. Now there is little by way of dissent. The tyranny of the unspoken party whip reigns over all. Discipline is a dubious virtue if it makes members too timid to be original. You can almost script their speeches beforehand. Their words may differ, so might their style of argumentation, but they dare not stray from the party line.

The noise, the interruptions and boycotts—these elements of seeming chaos are about as unpredictable as a puppet show. Somebody in the party dictates the 'floor strategy', and all the flock does is to toe it in unquestioning obedience. I did not find a single member who would defend the unruly scenes, yet they participated in them. The House has passed many resolutions to let proceedings, at least question hour, carry on undisturbed. In vain. All norms of parliamentary behaviour go out of the window whenever a party deems it fit.

Some debates in the House, of course, are still meaningful—for these members come prepared, spending hours in the Parliament library (which, by the way, is one of the best in the country). The press has, perhaps unwittingly, dampened their enthusiasm over the years because members who talk sense scarcely get a line in and the nuisance-wallahs who specialise in disrupting the proceedings gleefully make the front page.

At times, some lawyer-members engage in competitive speechifying. On these occasions, an average member is at best amused since the sparring is just like that in a law court—words, words, words, to win a technical point. The old emphasis on quality and content is now a rarity. Then, economics would attract attention, especially the five-year plans. Now it's reduced to a mundane statement on which public enterprise has been sold to whom. The members are regularly informed about imposts that have been slashed to attract foreign firms. Some ministers seriously believe the country will improve if every money-making public enterprise is privatised and if multinationals are given total control of the fields in which they would like to invest.

Poverty is rarely mentioned. Whenever it is, it is not to ponder how it can be eradicated, but to dupe the common man, the voter: see all ye citizens clear and plain, those wallowing in luxury have not forgotten you, not for a moment! Never ever did I hear the government explaining why our proud country had the largest number of poor in the world.

Something worse has happened to the Rajya Sabha over the years. It has become a pale and rather sad carbon copy of the Lok Sabha. If a party decides not to allow Parliament to conduct its business, this applies to both Houses. Earlier, the Rajya Sabha was the House of Elders, imparting advice on matters the Lok Sabha would not discuss. That redeemed Parliament's image. Today, it's all over, bar the shouting. Which, in effect, rules.

What disappoints me the most is the scant attention paid to the Rajya Sabha, which was once the cynosure of the country because the best debates happened there. The government now treats the House as nothing more than a rubber stamp. That attitude partly led to everyone removing even the residential qualifications required of a member. Now they don't have to be residents of the state whose assembly would elect them. They have in the process killed the very purpose of the Council of States.

Neither the prime minister nor his deputy was present when the eight members nominated for eminence in their field bowed out. The Congress came to vote for the 99th constitutional amendment but did not stay back to participate in the farewell ceremony. Jaswant Singh, leader of the House, would come and go, as if to fulfil a formality. I recall when the nominated members were sworn in, the then prime minister made it a point to be present. It is gestures and conventions that make democracy tick.