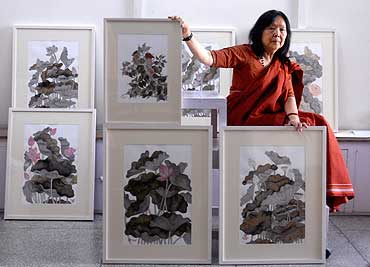 outlookindia.com
-0001-11-30T00:00:00+0553
S miling beatifically before her paintings of unfurling lotuses, majestically swaying pipal trees and finely shaded oleander shrubs, artist Tan Chameli Ramachandran exudes a blissful air of serenity. It's an air that those currently viewing her canvases at her first show abroad—at London's Grosvenor Vadehra Gallery—are certain to find stealing over them as well.

The wife of A. Ramachandran, the Padma Bhushan awardee famous for his exuberant depictions of myths with a touch of Kerala-style murals, Chameli's Chinese-ink paintings are as still and austere as his are sumptuous and flamboyant; her use of colour as restrained as his is profligate. Exquisite as her art is, though, it's taken decades for the limelight to reach it: Chameli is now 67, and so modest and reticent, it's a miracle she let it get there even at this late stage. "I'm old in age, but young in my work," she says shyly. "I started my work 20 years ago, but unless you have something to state or express, there's no point in showing! And I still have a long way to go!"

But Chameli's journey has been anything but ordinary. In 1940, her father, Tan Yun-shan, professor of Confucianism and Taoism and an accomplished calligraphist, accepted Rabindranath Tagore's invitation to found Cheena Bhavan, Centre of Chinese Studies, in Santiniketan. The fifth of Prof Tan's children, and the first to be born there, Chameli was given her name by the great poet himself; named both for the fragrant flower, and since he thought the three-syllable word would easily lend itself to be written in the Chinese script.

Apart from a two-year stint in Changsha in China's historic Hunan province, Chameli and her six siblings grew up entirely in the esoteric haven of Santiniketan. Here, they studied, spoke and thought in Bengali, sang Rabindrasangeet, and ushered in each season with festive utsavs. This deep communion with nature had a direct influence on Chameli's choice of subject matter. The tenderness of new pipal leaves humbled her and transported her, as did the flame-coloured blossoms that crowned gulmohar trees, boisterous pigeons and spiky ixora flowers. And they all found their way on to her paintings, with something of the quiet intimacy that was later to become her trademark.

Reflecting on the transcendental contemplation of nature through her art, so innately characteristic of Santiniketan, Chameli says, "Art isn't limited to painting or sculpture, but is life itself—life that I perceive in the bloom of a particular flower, in the texture and subtle tones of a petal, the magical rippling of leaves by an invisible breeze, and in the cry and swift movement of birds streaking across heavily laden dark monsoon clouds...."

Apart from subject matter, Santiniketan was also an inexhaustible source of varied artistic influences for Chameli to draw on. While a student at Kala Bhavan, she studied the same Rajasthani miniatures, Kalighat paintings and Ajanta murals that influenced Nandalal Bose and Ramkinkar Baij, torchbearers and masters of the Bengal revivalist school. Not to mention direct interaction with Baij himself. "I used to go to him to show him my work when I was a 16-year-old," recalls Chameli. "But his remarks were a bit eccentric, they weren't for a young girl to understand." Nevertheless, the hints of naturalism in her style can perhaps be traced to his tutelage.

In her choice of medium, however, her father was to play a greater part. Prof Tan was a practitioner of a pictographic form of ancient Chinese calligraphy called xiaozhuan or 'small seal script', which impressed on her own work its stark elegance, as well as the fluid, deft variety of its brushstrokes.

In her recent work, Chameli has also begun to employ subtle hints of colour and metallic tints, in a touch of gold on the underside of a lotus-pad or a silvery lunar penumbra. It's a use of colour that traces itself to the Chinese tradition; not to depict shades in correspondence with a fixed light source, but rather, to give rocks, leaves, and moss their own individual character.

Also characteristically Chinese is Chameli's way of taking in the elements of nature that transfix her—the oleander tree outside her East Delhi home, coconut palms and lotuses in her husband's native Thiruvananthapuram, or the brooding cluster of coniferous trees outside her son's Huntsville house in America—and recomposing them from her imagination, straight on to the canvas. "I don't copy nature as such," she explains. "I study, and accordingly select, depending on the demand of the space, the form, or an atmosphere." "To convey likeness through unlikeness," as the Ming painter Wang Fu put it. Chameli's delicately wrought ink paintings conjure up what Japanese aesthetician Onakura Kakuzo says is of the essence of Chinese painting: "The life of the spirit in the rhythm of things."

It would probably be most apt to sum up the rapt, mystical spirit of divine transformation evoked by the contemplation of nature in the words of Tagore, whose poems are a wellspring of inspiration for Chameli: "The vision of Paradise is to be seen in the sunlight and the green of the earth.... Everywhere in this earth the spirit of Paradise is awake and sending forth its voice." A soft echo of that voice rings out on Chameli's paintings.

A Touch Of Zen