The Emperor Is Naked 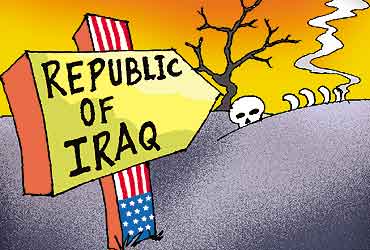 outlookindia.com
-0001-11-30T00:00:00+0553
Does anyone remember George Bush's plans for Iraq before he invaded that country? Iraq was to be turned into a model democracy. Bush extolled its strong secular tradition and its large reservoir of technologically trained manpower. Iraqi democracy, he claimed, would serve as a beacon for the rest of West Asia and roll back feudal, autocratic regimes throughout the Islamic world. West Asia would emerge as a new zone of peace and would cease to be a haven for Islamist terrorists. In one stroke of the military pen, therefore, Bush would win the 'war on terror' and make the world safe once again.

Less than 10 months after the invasion, this vision lies not merely in tatters but exposed as the delusional dream of a president with a tenuous grip on reality. For, with the inexorability of Greek drama, the political and the military situation in Iraq has spiralled almost completely out of control.

Take the military situation first. When Saddam Hussein's sons were killed, the US military command announced this would sharply reduce the attacks on its forces in Iraq. Instead, the rate of attrition rose sharply in the next 10 days and remained on a higher level than before even after the immediate reaction was over. When Saddam was captured on December 13, the US military and the coalition provisional authority issued similar confident predictions. But more soldiers were killed in the second half of the month than the first. In all, 40 American soldiers lost their lives that month. In January, the death rate climbed to 45.

Since November, faced with an election in 12 months, the Bush administration has given top priority to minimising American casualties. So, the military administration has pulled its troops ever more tightly into heavily protected enclosures and rarely allows them to venture out. That has given the Iraqi resistance just the respite it needed to consolidate its position and to build lateral linkages between previously isolated groups. The results have been apparent in the last three weeks. On February 3, twin suicide attacks in Irbil, the de facto capital of Iraqi Kurdistan, killed 109 key members of the two Kurdish political parties. A few days later, 12 Sunni resistance groups warned Iraqis against joining the 'Coalition'. On February 10 and 11, they underlined this message with two suicide bombings on an Iraqi police recruitment centre and a military barrack that killed at least another 100 Iraqis.

Only days later, there was a concerted attack by a group of guerrillas on a military compound in Fallujah at just the time when it was being visited by the US military chief, Gen John Abizaid. Last week, the guerrillas attacked the compound again. These were the first signs that the insurgents might be going on the offensive. But their increasing effectiveness had been demonstrated even earlier by the fact that even though US soldiers were venturing out of their fortresses less and less frequently, the death toll among them had continued to rise. This means that more and more of the convoys that leave the secure areas are coming under attack and the attacks are becoming more effective.

The political situation is even more chaotic. Since June, the Bush administration has been driven back step by step from its arrogant unilateralism. From asserting that it would govern Iraq for at least two years and stay there at the invitation of the next government for even longer, it has now been reduced to cutting and running by June 30, barely 14 months after the capture of Baghdad. And while once it held the UN in utter contempt—remember Bush's threat to turn it into a debating society—it is now virtually begging the organisation to give it some legal and face-saving cover while it pulls out of Iraq.

But it is bungling even this pullout, for it is as far from leaving behind a viable successor government in Iraq as it ever was.Having got rid of Saddam and his Baath party, the US should have moved to establish a democratic regime in Iraq as rapidly as possible. But democracies are notoriously difficult to control, for their leaders have the irritating habit of listening to their people instead of their foreign mentors. So, the US opted for a puppet government instead. Once the resistance killed one of its members that government ceased even to meet, let alone function.

That led the US to its second attempt at creating a puppet regime. Fifteen members were to be nominated by various bodies in each of Iraq's 18 provinces to form a 270-member transitional, i.e. nominated legislature. This would elect a transitional government that would take over from the Coalition Provisional Authority and, hopefully, prepare the way for an election in 2005.

This scheme, too, has proved a complete non-starter. For, 110 days after it was announced, even the first step of working out the nomination process has not begun. Utter chaos reigns. And while the US has not given up the transitional legislature scheme, Kofi Annan's envoy, Lakhdar Brahimi, has all but said that it is unworkable.

The only course that Mr Bush remains dead set against is the democratic one. Ever since June, the principal Shia leader, Ayatollah Ali Sistani, has been urging the US to hold elections to form a constituent assembly. The argument that his administration is putting forward is one that we in India, who are familiar with insurgencies, used to hear only too often in the '80s and '90s. It's that elections will be difficult to hold while there is a large-scale and growing threat to law and order. True enough, but with every day you delay that threat only increases.

While the US dithers Al Qaeda, whom Saddam had kept at bay, strikes ever deeper roots in Iraq. And Al Qaeda never wants stability to return to that country.