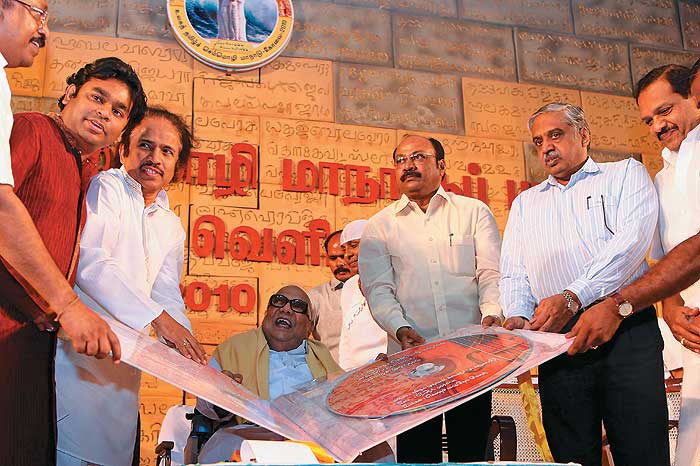 The man considers himself—and there are many in the state who will agree—to be a Tamil icon. And yet, surprisingly, when Muthuvel Karunanidhi struts on to the grand stage in Coimbatore as the presiding deity of the World Classical Tamil Conference (WCTC) later this month, it will be for the very first time in his long innings as a chief minister and state politician.

“When MK tells the cadre not to convert the conference into a party affair, it actually means the opposite.”
Cho Ramaswamy, Editor, Tughlaq

So it’s no wonder that the octogenarian politician is pulling out all the stops to make the event memorable. He has bulldozed opposition from principal adversary, AIADMK chief Jayalalitha, (“I’ll not demean myself by coming to this dubious conference”, she sniffed) and sidestepped controversies to enable this five-day extravaganza to unfold as planned. The event, starting June 23, will see him rubbing shoulders with eminent figures from the Tamil literary world, including many Sri Lankan Tamil litterateurs.

MK himself insists that there’s nothing political about it. Political commentators here, though, pooh-pooh the claim, saying he has not just a beady eye on the state polls (due next year) but is also aiming, through this ostensibly cultural exercise, to resurrect his reputation as protector of the Tamils. That image, of course, is in tatters after last year’s massacre of Tamils post-LTTE rout in Lanka.

Critics of the conference are already dubbing it a “political tamasha”, not dissimilar to Karunanidhi’s over-the-top birthday parties, which he presides over like a benign Chola king, receiving flowers and elakka malais (cardamom garlands), gifts in gold and silver, even cash and kilos of dry fruits. Writer Charu Nivedita says, “The only reason he is holding the conference is because the polls are coming and he wants to tom-tom this as one of his achievements.” He adds, however, that this is standard practice for TN’s mega politicians. Which is true: C.N. Annadurai, M.G. Ramachandran, J. Jayalalitha, they have all organised ‘World Tamil Conferences’.

“The only reason he is holding the conference is because polls are coming and he wants to tom-tom this....”
Charu Nivedita, Writer

Tughlaq editor and satirist Cho Ramaswamy, one of the CM’s most acerbic critics, laughs as he says, “When Karunanidhi told the DMK cadre during a recent visit to Coimbatore not to convert the conference into a party affair, the message being sent out was: make sure it’s a party affair and that I am the centerpiece....” That said, it is a fact that Tamil conferences succeed best when they are tamashas, and held on the soil of Tamil Nadu. Historically, those held in Paris (1970), Kuala Lumpur (1987) and Mauritius ( 1991) have been flops. One the other hand, Annadurai’s mega show in Chennai (1968), mgr’s Madurai extravaganza (1981) at which Jayalalitha danced and her own show in Thanjavur in 1995 with folk dances, theatre, song and dance, at which she virtually commandeered the presence of then Congress prime minister P.V. Narasimha Rao were successful blockbusters, entertaining the masses and giving the Tamil literary world food for thought.

With the CM leaving nothing to chance, nearly Rs 300 crore has been lavished on the conference, expected to see  two lakh people attending (the unofficial figure is 10 lakh). Despite projecting itself as a literary event, the WCTC will have an overwhelming filmi flavour. Why, the Tamil conference anthem, penned by Karunanidhi himself, has been composed by none other than A.R. Rahman and picturised by director Gautham Menon.

Every hotel, hostel, school and college in and around Coimbatore has been commandeered for the WCTC, creating a crisis of sorts since the marriage season is also on. Wedding bookings made a year ago have been cancelled and nonplussed parents of the bride and the groom told to look elsewhere. Says an unenthusiastic C.M. Jayaraman of the Coimbatore Citizens’ Voice Club, “The government could have scheduled the meet during Purattasi and Margazhi (September/October and December/January which are considered inauspicious) so that it did not inconvenience the public.”

There have been other controversies too. The CM, even at 86, is a prolific, well-known writer, but there is a question mark over the literary quality of some of the other work to be presented at the meet. “I was asked to vet 150 abstracts and I found them of very poor quality,” says a committee member. That these were invited through newspaper ads is another sore point. A writer/publisher who wouldn’t be named says, “Many known writers found it insulting to have to send a synopsis and therefore abstained. They expected to be invited as guests.”

So while the conference will be graced by 200 eminent writers from abroad, including Finnish Indologist Asko Parpola, Sri Lankan Tamil scholar K. Sivathampi and Prof George Hart from the US, many known writers from Tamil Nadu itself will be absent. Academics, however, largely from various state universities, will be there in full force, reading a staggering 1,028 abstracts. The Viduthalai Chiruthaigal Katchi’s MLA Ravikumar, who is reading a paper on ‘Tamil in the time of globalisation’, says creative writers will not be missed as they “lacked academic rigour”. Defending the conference, he says the Tamil world needs a “morale boost” after the war in Lanka. He also asserts: “The conference will lay to rest the raging debate on whether Tamil or Sanskrit is older.”

However, one of the subjects where intense discussion is likely is the state of Tamil today. Manushya Puthran, poet, editor and publisher of the magazine Uyirmmai, says, “When compared to other CMs, Karunanidhi has shown more commitment towards issues that affect the growth of Tamil language.” This, while Tamil “is continuously losing its place in our society”. According to him, “the Dravidian movement which eulogised traditional Tamil literature has not been useful for the growth of the Tamil language. The immense growth is mainly due to the individual contributions of scores of writers, scholars, researchers that haven’t been communicated to the next generation. Linguistic jingoism without a contemporary perspective won’t help.”

Dr A.R. Venkatachalapathy, Tamil writer and mids professor, laments the “abysmal” level humanities and social science studies in Tamil have sunk to. “Factors like money, caste, religion and politics have further ruined it,” he says. What else can you expect when liquor barons and politicians run institutions, he asks. Something perhaps for the conference to ponder over. If it dares to.