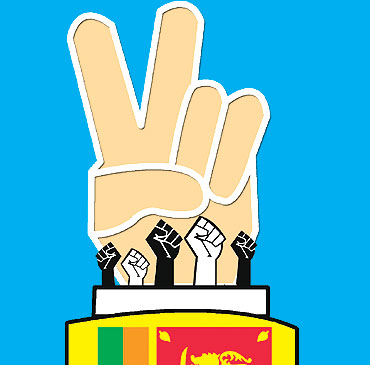 outlookindia.com
-0001-11-30T00:00:00+05:53
So why are they bursting crackers in Colombo as if some IPL match was won? Velupillai Prabhakaran, the LTTE chief, may be dead or alive. But that's completely beside the point. What everyone should be asking is whether the Tamil question in Sri Lanka is dead. Let's make no fuzzy mistake. The answer is a resounding no.

The present triumphalism of the Sinhala government and the carousing people on the streets of Colombo is a display of a kind of political idiocy. They have learnt nothing from over sixty years of ethnic conflict and almost thirty years of armed insurgency, which has claimed an unconscionable number of dead soldiers and militants—not to speak of an unacceptably high number of civilian casualties.

The notion of a Tamil homeland is not going to perish with Prabhakaran. The militant movement, which began in the mid-1970s in Jaffna, was in response to three decades of unbridled majoritarianism by the Sinhala state, which tried to squeeze Tamil aspirations and snuff out Tamil identity. Broadly speaking, these conditions continue to exist.

The Sri Lankan state itself will be in no mood to address any of these long-standing grievances. It's up to India and the rest of the international community to effectively persuade Colombo to pay attention to redressing this. It is apparent that before the dust settles, the Sri Lankan government will do its best to send across Sinhala settlers into the Tamil regions of the north and east, even as a large segment of internally displaced people continue to languish in ruthlessly controlled 'refugee camps'. While humanitarian aid is sure to pour in, a substantial percentage of it is bound to be diverted to settle 'outsiders' in the newly depopulated Tamil regions. The strategy of demographic disaggregation is not unknown in our times and frequently used to neutralise nationalist ambitions. Ethnic porosity over geographic stretches becomes particularly achievable in smaller countries.

But what the Sinhala state now needs to heed is the new reality of a swelled out, prosperous and extremely vocal Lankan Tamil diaspora. Thirty years of militancy—topped by at least twenty years of LTTE hegemony—has decimated the Tamil youth, crippled the Tamil intelligentsia and denuded the Tamil population of any sort of alternative leadership at the local level. It is into this space that a newly articulate, million-strong, diasporic community with international connections is poised to step in. That is where the new leadership, new resistance and new political process will come from. This segment is better equipped to continue the struggle through constitutional means, even as it encourages stray elements to carry out neat surgical strikes on a vulnerable Sri Lankan state.

The Sinhala government is reportedly preparing to divide the newly conquered Tamil territories in the north and east for obnoxious renegade elements like Douglas Devananda, Pillaiyyan and Karuna to administer. This too is only going to lead to further alienation as armed acolytes of these warlords roam the streets bullying and extorting a beleaguered population. Some of it is already happening in the east. Sri Lanka will have no mechanism to demobilise this Falstaffian army. A quick slippage into another kind of a civil war is inevitable.

No one speaks enough about India's own wretched role in the political and social mess that contemporary Sri Lanka is in today. In the 1980s, it was India's strategic interest in keeping president Junius Jayawardene from walking into the US camp (by allowing the American Seventh Fleet use of Trincomalee harbour) which led to the Indian state's alacrity in setting up training camps for militant Tamil youth groups like LTTE, TELO, EPRLF and PLOTE. These armed insurgents were to be used as a threat against any Sinhala intransigence. Ironically, India lost the plot pretty soon as the groups became involved in the usual internecine, inter-intelligence agency rivalries and dirty tricks. Soon, by 1987, the LTTE had ruthlessly decimated all other groups claiming to represent the Tamil cause and had declared itself independent of Indian control too. Subsequently, the role of the Indian Peace Keeping Force (IPKF) in turning the guns on the Tamils in Jaffna and the recent Indian collusion with the Sri Lankan state to stomp out the rebels in the Vanni are well known.

However, the closing of this chapter in Sri Lankan history is bound to see the inauguration of an even tougher phase of challenges for the Rajapaksa oligarchy. Lack of governmental enthusiasm to correct its historic misdeeds is sure to breed a new Tamil politics this time which will lay the foundations for a new nation-state in the neighbourhood. The Rajapaksa regime's time starts now.

No Paperdart Policies In The Classroom