'The Educated Have Lost Touch With Their Local Almanac' 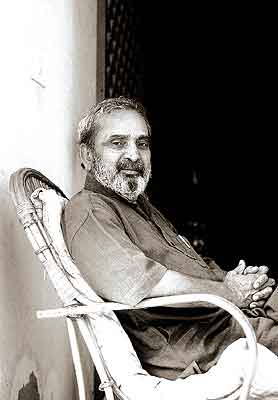 Once ranked among the 50 most important people in the country by the now-defunct Illustrated Weekly, Kannada writer-critic U.R. Ananthamurthy has worn many hats with aplomb—English teacher, vice-chancellor, Sahitya Akademi chief, National Book Trust president, and environmental activist. He shot into fame with Prashne (The Question), a collection of short stories in Kannada. And, working under the Marxist critics Malcolm Bradbury and Richard Hoggarth in Birmingham, Ananthmaurthy wrote Samskara, whose celluloid version heralded a new trend in the Kannada film industry. Excerpts of an interview with the Jnanpith winner:

All these identities are continuous and not contradictory. The ideology of 'one Indian' tries to make these continuous identities into contradictory identities. Dr A.K. Ramanujan once wrote that he spoke three languages—Tamil with his mother, Kannada with boys on the street and English upstairs (with his father who was a professor in Mathematics). All these three languages were continuous. This is India of the past, but pressures of modern India have made quite a few of these continuous identities into contradictory identities. Monolingualism is a European phenomenon, and not Indian. This whole notion of a nation that bothers us about several languages or castes is what we have inherited from Europe. For them, a nation is one language, one race and one relationship. If we pursue this notion, India will break. So, the only way to stay together is to decentralise. Thanks to two people—Rabindranath Tagore and Mahatma Gandhi—who were opposed to the European notion of a nation, we have evolved in a unique way.

So, in addition to diversity of tongue, what else constitutes Indian?
It sparks a quarrel everytime you try to define it. When you don't (try to define it), it is there (laughs). Take this example of unity in diversity. If some leader says unity is more important than diversity, than all diversities begin to express themselves. That happened during Mrs Indira Gandhi's regime and we saw trouble in Assam, Punjab and other states. Don't we have concepts like holy places for Hindus and followers of Islam? There are many ways in which India is united and we think of it only when diversities try to assert themselves too much. Also, when unity seeks to assert itself too much, then we think of diversity. These differences are not only in religion or language, it could even be in the use of oil (coconut, mustard) or food grains (rice belt, ragi belt or wheat belt) as one traverses across the country. The threat would come when one attempts to open a market and sell the same stuff everywhere. This is coming from the concept of globalisation. In the pursuit of globalisation, we could become little globes.

What are the problems authors face in imagining this vast and complex nation?
I face no problems at all if I think Kannada is a universe in itself and write for this language. It's not the numbers alone that one has to take into consideration because all great literature is not addressed to the entire world, but to a particular group or community. If you think of literature as a commodity for export, maybe you will export tasteful literature, but that's not great literature. So, for me, great Indian writers are born as Gujarati, Bengali or maybe Tulu writers and they will be universally valid. But this has been turned into a problem by market forces and market-oriented concepts coming in the way of genuine talent. The work of an Indian author is picked up by an English or American publisher, a huge amount is paid and the author becomes a celebrity overnight. I am confident this threat will pass. Our Indianness will remain intact till we resist such ways of the modern world. There's a compulsion even among regional parties and politicians to think nationally because of our heritage.

The modern nation-state was bequeathed to us by the British and we also have a long history and geographical territory. How do we reconcile the two? Or, should we reconcile them at all?
The British left us a divided India. Personally, I feel the Pakistanis are no different from us. In my idea of India, I would have given a unique position for Muslims of Pakistan. I think they (the British) could do it ('unite' India) because they used modern technology like railways and postal service and ideas travelled across the country and there was always this concept of Indianness. The British left us with a politically united India, an administratively united India.

Is modern India defined by the British itself a problem?
Yes, it is a problem if they defined it as a nation which should not have these diversities but evolve as one with one language, one culture, one religion, just like the European notion of a nation. That would have left us with a problem.

Do you encounter problems in imagining languages and cultures?
There won't be a problem if I think of Tamil or Kannada as a universe in itself. But one can always learn other languages because of the ambience (of languages). If you go to a small town like Udupi, you will find people speaking in Tulu, Kannada, Urdu and Malayalam. It is very difficult to find in Europe. An IAS officer speaks only English. The more literate you are, the less languages you know. That's because literate people pursue the European notion of one language and culture. But the poor learn more languages for survival. It is they (poor, illiterate) who unite our country, not our intellectuals. The Indian's way of living here is keep to your own language, but adapt to local language. This is unique to India. In India, you have a house tongue (I don't call it mother tongue, that exists only in Europe). We use another language when we walk on the street and use a third language, Sanskrit in the past and English now, for communication. So, there's no problem in keeping one's identity and adopting a new language. My agenda is to keep these diversities and a unity which one need not define.

Your comments on the hegemony of Hindi and its effect on regional languages...
I think hegemony is evident when commercial and other considerations come into the picture. I see less of a problem with Hindi and more of a problem with English. We had some hegemony when it came to religious rites but that did not pose as much of a problem as commercial aspects of the language. This is market-driven and unnatural. As a matter of fact, Hindi is a great language, where it is a regional language. English is a great language where it is spoken as a regional language in Britain, America or Australia.It evolves as an acceptable language for communication for the world, but not as a language for in-depth use. So, our languages may be geographically limited, but that limited geography is a universe in itself. If you feel so, then you belong not only to your language but to the entire world. If Jesus Christ can survive through translations, any great writer can also survive in other languages.

How would you resist these commercial interests from influencing literature?
We must take some steps like making it compulsory for children to study the language of the region up to class VII along with English. This is a hard decision, but it must be implemented even in private schools. This will help children to study two languages before they are twelve and will prevent them from losing contact with the other language and the people. We are losing this (contact) now because we want our children to settle down in New York. Our cultural diversity will also disappear because of these modern trends. The educated Indians have lost contact with the almanac (panchanga) and know nothing about festivals or auspicious days, but in villages people know about the jatre (local festivities) even though they are illiterate. We have to resist these forces (commercial) at the political level as well. Or fatigue could help us turn away from the modern world system. I have seen it happen among the youth of some advanced countries.