The Eco Line Of Control

It's come to this: forest dwellers may have to go, for the sake of the forests 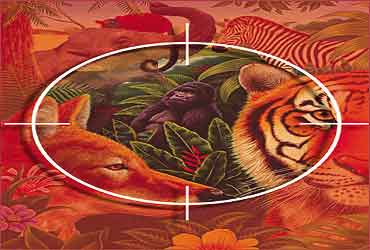 outlookindia.com
-0001-11-30T00:00:00+0553
Tigers grab headlines while the rest of India's wildlife often get ignored. Elephants, mouse deer, pangolin, hornbills and hundreds of other rare species find refuge in our national parks. The disappearance of tigers at Sariska is a terrible tragedy but it is not an isolated incident, nor should it be the final curtain call for India's wildlife.

At the risk of blundering into a thicket of thorny opinions, let me suggest a few partial solutions. First, we must accept that humans have been living in the Indian forests for millennia and conflicts can only be resolved if the needs of forest dwellers are met. However, the possibility of humans sharing these forests in peaceable harmony with other creatures no longer exists. The situation has become critical. Communities that depend on forest resources, within the boundaries of wildlife sanctuaries, must be relocated and rehabilitated with expediency and equity. A year ago I might not have held this view, but after recently visiting the Chilla range of Rajaji National Park (Uttaranchal), where Gujjar herdsmen and their buffaloes have been moved out of the park, there is no doubt in my mind that nature has been given a vital reprieve. Camera trapping by the Wildlife Institute of India has shown that tigers are returning to these forests and many more animals are in evidence. Elephants and other wildlife now have access to water sources that used to be overrun by cattle. Deer no longer have to compete with buffaloes and cows for grazing rights—and as these 'prey species' multiply, so do the predators.

While the Gujjars received compensation, including occupancy of forest land outside the park, incentives could undoubtedly be increased. Ethically, a country that is now building super highways and projecting 8 per cent growth should be willing to provide generous relocation packages for those who struggle on the margins of the forests. It is an issue of national and natural heritage. To maintain a subsistence economy that denudes the few remaining pockets of irreplaceable jungle no longer seems logical or viable.

In the process of relocation, if forest dwellers receive a windfall (free of red tape and graft), what is the harm? For once, let's spoil the poor. Save the tiger and help India's ecological refugees.

Combined with this, there must be strict enforcement of international laws and conventions against the illegal trade in animal parts. Equally important is the vigilant patrolling of forests against poachers. If every major colony in Delhi can be gated, then surely the country can protect its national parks. Again, financial resources need to be found to make this succeed and the ranks of forest officials and guards increased. In Mussoorie, where I live, we have seen the benefits of the army's eco-taskforce, which has reforested the hills. A similar initiative could protect wildlife reserves. The military doesn't have to take over, but simply reinforce the forest department's authority and provide manpower. The boundaries and buffer zones of national parks, as well as forest corridors that allow animals to move back and forth from one range to the next, cannot be a porous frontier. India needs an environmental line of control.

There is also the awkward question of eco-tourism, a hyphenated paradox. First and foremost, national parks must be preserved and maintained for the sake of wildlife itself, not because of human curiosity or entertainment. Priority of access should be given to scientists and naturalists. Some of the larger parks can accommodate a controlled number of paying visitors but recreation within the parks must be limited. Core areas, where animals get a respite from man, must remain sacrosanct. Those of us who have enjoyed easy entry into wildlife preserves should realise that, like the Gujjars and other communities, our presence in the forest needs to be severely restricted.

Nevertheless, safari parks—zoos without visible cages—can be located next to a national park. An ad-hoc version of this exists on the edge of the Corbett park, where commercial jeep safaris are permitted in the Bijrani range. If developed like safari parks in other countries—where captive species are contained within spacious enclosures—it will offer casual tourists an opportunity to view animals in a manner more suited to their attention span. Wildlife awareness can be increased without destroying the parks themselves. Another possibility, for which a model exists, is the Theppakkadu Elephant Camp at Mudumalai sanctuary in Tamil Nadu. It's one of the best places to observe elephants in captivity and provides the animals with a semi-natural habitat. More than any other creature, elephants are a pleasure to watch, especially in the water—the way they wrap their trunks around each other, nuzzle their young, and spray themselves. While everyone who visits a national park wants to see a tiger, this usually means a fleeting glimpse of orange fur behind the bushes. Exciting though it may be, there is no comparison to spending an hour watching the community behaviour of an elephant herd.

In essence, we must rethink the purpose and priorities of national parks. Human intrusions should be minimised and the perimeters of parks carefully patrolled. Alternative wildlife experiences for tourists can be developed. All this requires compromises, but if tigers and other endangered species are to survive, we must be able to overcome controversies, act quickly, and protect sustainable environments in which India's natural heritage is preserved.

(Stephen Alter is the author of eight books including, Elephas Maximus: A Portrait of the Indian Elephant).