The Ebbing Of The Saffron Tide

The SP, BSP and Congress gain at the expense of the BJP

outlookindia.com
-0001-11-30T00:00:00+0553
Going by the results of the local bodies' elections in Uttar Pradesh last week, chief minister Rajnath Singh has not quite lived up to his promise to the bjp high command that he would turn the party around in three months. He might have decelerated its downward spiral but at the end of the day it is the Samajwadi Party (SP), the Bahujan Samaj Party (bsp) and the Congress which have gained at the expense of the bjp.

The saffron party has lost ground even in its urban strongholds, though not as badly as was anticipated. These losses have been its rivals' gains. Which leaves little reason for the mutual back-slapping between Singh and state bjp chief Kalraj Mishra. And none at all for Singh to comment that "the bjp still enjoys the faith and trust of the people and the results speak for it".

The bjp has barely managed to hold on to its mayoral tally of 1995 (eight minus one who defected to Kalyan Singh), if you include the Bareilly seat which went to a bjp rebel. While it has just about maintained a grip in the cities, in smaller towns and particularly in semi-urban areas, it's either neck-and-neck with or even behind the SP. In fact, the SP has more nagar panchayat chairmen and members than the bjp does. And while the bjp's tally of nagar palika chairmen has declined from 87 in 1995 to 45 this time, the SP's 37 are a gain of 10 over its previous tally and it's only marginally behind the bjp in the number of corporators. "Ours is a direct fight with the bjp," exults SP leader Amar Singh. "You can't deny that the SP has now been accepted in urban areas," says its state unit leader, Ram Saran Das.

But even as the SP congratulates itself on having got the bjp on the run in small towns and semi-urban areas, it may be early for celebrations. The real surprise is the Congress, which has done better than expected. It handily won the Kanpur mayoral seat (upcc chief Sri Prakash Jaiswal is the Kanpur MP) and almost as many corporators as the bjp. In fact, its tally of nagar panchayat chairmen has risen three-fold, from 6 to 19. Should the Congress resurgence prove a lasting trend, it could be a cause of worry for both the SP and the bsp. A senior bjp leader admits the Congress has done well in reserved constituencies, attracting both the Dalit and the Muslim vote, at least in western UP. Says Jaiswal: "The civic poll results indicate that the Congress is gradually regaining its position in the state. Compared to previous elections, we have improved by 20 per cent overall. Most of our candidates lost by a narrow margin."

Another significant trend to emerge in these elections is the voting pattern of the minorities. They have tended to vote for candidates from their own community rather than for a particular party, thus dividing their vote between the SP-bsp-Congress trio. Says Muslim intellectual and leader Zafaryab Jilani: "The sole intention of minorities is to help another party capable of defeating the bjp."

The trio is thus fighting like dogs over the minority vote, accusing each other of an underhand truck with the bjp. The bsp's Mayawati says "the SP and bjp have an understanding to oust parties like us" while Amar Singh claims "a tacit understanding between Mayawati and Murli Manohar Joshi". He charges the Congress with being the ‘B' team of the bjp as "a secular party like the SP is its target rather than the bjp". The Congress, on its part, claims that the SP has exposed its non-secular agenda by associating with the likes of Babri-accused Sakshi Maharaj.

The point all three could be missing, say political analysts, is that the minority voter has lost faith in all political parties and wants leaders from within the community. The SP insists it lost minority votes, especially in urban areas, as "polling stations in minority-dominated areas were shifted at the last minute".

The bjp is content to project these results as an improvement by claiming the large number of independents who've won as its own. Says UP general secretary-in-charge Pyare Lal Khandelwal: "We've improved by 50 per cent in nagar panchayats and by 20 per cent in nagar palikas." He attributes the alleged gains to the improved morale of the bjp worker: "He was demoralised by the feeling that the bjp had lost ground. Now he has realised it's not the case."

"These (civic) elections are a preliminary examination. The finals will be held at the time of the Vidhan Sabha polls," SP supremo Mulayam Singh had said a month back. Understandably, all political players went the whole hog in campaigning. But with none of the four players having yet announced an electoral tie-up, it's early to predict the outcome of a Vidhan Sabha poll. SP is on a good wicket but to form a government it'll have to gain a lot more ground. Its two-fold strategy is aimed at retaining the obc-Muslim votebank. First, by charging the "upper caste" UP CM and state unit chief of being "anti-backward". "I am a Thakur, but I am pro-backward. Rajnath Singh is an anti-backward Thakur," claims Amar Singh. The second element of their gameplan is to keep its minority flock away from the bsp—which successfully played the Dalit-Muslim card in the Lok Sabha elections—by saying a post-electoral tie-up between the bsp and bjp is inevitable.

Barely a month into office, Singh has not yet had time to institute major changes. But, says Khandelwal, with polls still some distance away, he may yet be able to turn the tide. Before that, he'll have to stem infighting. Reacting to the results of the Bareilly and Gorakhpur seats, Singh admitted as much: "Our party paid the price because of infighting."

The story so far , post the civic poll results: for the bjp, the slide has slowed but not halted; the SP has gained ground in urban areas but needs to hang on to its votebase. The bsp too has gained, but can't make it on its own. The Congress has improved significantly, but is still pretty much number four in the race. The heat is on. 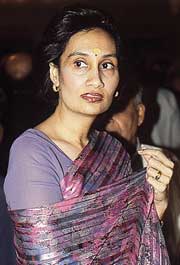