The East Is Red

In a span of a violent week, N-E insurgents bring the troubled region to boiling point More Coverage 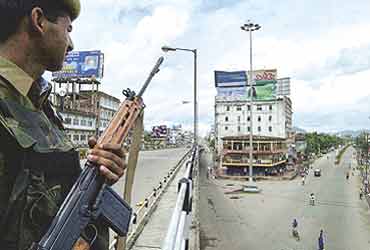 outlookindia.com
-0001-11-30T00:00:00+0553
It was nothing short of a danse macabre. Elusive guerrillas suddenly stepping up operations, planting bombs at public places or emerging from nowhere to train their Kalashnikovs at crowds in busy markets or on villagers dragged out of their beds. These so-called homeland warriors caused death and destruction in Assam and Nagaland over four days, beginning October 2, bombing and gunning down up to 75 people and injuring more than 200 in around 20 serial attacks. The result: a bleeding Northeast and a strategic frontier in turmoil.

A unified headquarters of the army, police and the paramilitary is in place in Assam for a coordinated counter-insurgency offensive. But not one militant directly involved in the series of murderous raids in the past week has been captured. The identity of the killers, at least in Assam, is no secret. The outlawed United Liberation Front of Asom (ULFA), fighting for a "sovereign, socialist Assam" since its inception in 1979, and the National Democratic Front of Bodoland (NDFB), pushing an armed campaign for a separate Bodo homeland since '86, have claimed responsibility for some of the attacks.

Assam chief minister Tarun Gogoi links the attacks to the ULFA regrouping after being flushed out of Bhutan last year. Says he, "The Bhutanese military offensive against ULFA and NDFB inside the kingdom in December last year has not helped us. The rebels appear to have simply relocated their camps." Gogoi is pushing New Delhi to focus on Bangladesh and Myanmar, where he insists ULFA and NDFB have bases and safe houses. "As we see now, the root of the problem lies in these two countries. Unless the rebels are uprooted from there, violent attacks are bound to go on," he says. Prime Minister Manmohan Singh too has now voiced his concern over 'some insurgent groups' taking 'shelter' in Bangladesh.

The CM's view is seconded by Khagen Sharma, IGP of Assam police's intelligence wing. Says he, "In Bangladesh, the ULFA is in the care of the Pakistani isi. In Myanmar, across Arunachal Pradesh, the ULFA is being provided logistical support by the Khaplang faction of the National Socialist Council of Nagaland (NSCN-K)." Yangon does not, but Dhaka has been consistently denying charges of its territory being used by rebels from northeast India. This despite New Delhi furnishing detailed lists of rebel camps inside Bangladesh to authorities there at regular intervals. The last such list of 195—handed over to visiting Bangladesh Rifles chief Maj Gen Jehangir Alam Choudhuri by his BSF counterpart Ajai Raj Sharma in New Delhi last month—in fact invited a derisive rejection from Dhaka. On checking the provided coordinates, they said one training camp on the list would have to be within a BDR cantonment and another at sea! 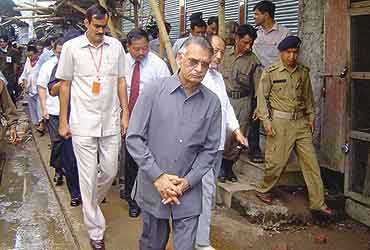 Union home minister Shivraj Patil, who was forced to visit the region due to the scale of the violence, said he "would not like to jump to conclusions" when asked if the rebels were planning their strikes from bases in Bangladesh and Myanmar, which intelligence circles say are their latest staging areas. Gogoi and authorities elsewhere in the region have received a shot in their arm with top world leaders condemning the terror raids targeting innocent civilians. This perhaps is the only occasion when UN secretary-general Kofi Annan, British foreign minister Jack Straw and the US have publicly focused on India's turbulent Northeast to condemn insurgent violence.

The US obviously has to do a tightrope walk in commenting on the situation in Kashmir, considering its equations with Pakistan. On the Northeast, however, it was very open in offering help to Tarun Gogoi—of course, keeping home minister Patil informed. "The US has considerable expertise in investigative techniques, including such areas as forensic analysis of explosive residues. Should you find it helpful, the FBI would be pleased to provide technical support for your investigation," ambassador David C.Mulford said in a letter to Gogoi. The CM has since sought New Delhi's nod to bring in US experts to assist in investigating the explosive attacks. That the Opposition Asom Gana Parishad (AGP) and the BJP, besides the Left parties, have been quick to rise in protest, saying the US has no business interfering in India's internal affairs, is another story.

If one thought the rebels' actions are predictable, they have foxed security and government circles with some of their responses. That the recent string of raids began on October 2, the Mahatma's birth anniversary, was no surprise. The ULFA-NDFB combine may have decided to add one more important day in the country's national calendar to strike, from the usual August 15 and January 26. Then, October 3 was NDFB's 18th foundation day. That aside, the attacks began within 48 hours of chief minister Gogoi offering a conditional ceasefire to the two rebel groups, indicating that they were not impressed.

Then the NDFB confounded everyone by first owning up several of the attacks between October 2 and 4, in which 20 people died, and then coming out with a statement to the media saying the group was "ready for talks" with New Delhi. In fact, the NDFB statement quoted group chairman Ranjan Daimary as saying that the outfit was "seriously considering the ceasefire offer made by chief minister Tarun Gogoi" and that the government would be told of its decision soon. Two days after this statement, the NDFB carried out yet another cold-blooded massacre, killing 10 ordinary villagers in the western district of Dhubri. Confusing signals, to say the least. "We have to wait and watch and find out whether NDFB is at all serious about what it is saying," says Gogoi. 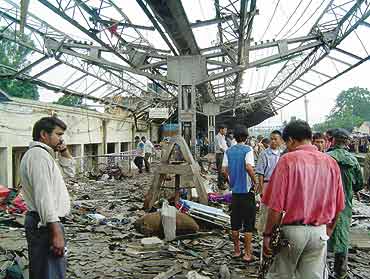 As attack after attack rocked Assam, the spotlight shifted from the deadly October 2 blast at the packed railway station and the nearby Hong Kong market in Dimapur, Nagaland's commercial hub, that left 26 dead and over 100 wounded. Both the NSCN factions are in ceasefire mode, leading to a guessing game over the killers' identity. Moreover, in its 57-year history of insurrection, the Naga rebels have never targeted civilians in this manner.

"We are very close to solving this case. An anti-Naga rebel group with a Naga ally could have carried out the Dimapur blasts," Kraibo Chawang, 'deputy information minister' of NSCN(I-M), told Outlook. The NSCN(I-M), engaged in peace talks with New Delhi ever since the August 1997 ceasefire, is carrying out an 'independent investigation' and has announced a Rs 5-lakh reward on anyone providing information on those behind the blasts. The rival NSCN(K) wants ULFA and NDFB to break their silence and come clean. It is clear from Chawang's comment that the group was pointing the needle of suspicion at ULFA, that has NSCN(K) as its Naga ally.

It's clear that the Centre has been jolted by the rebels' belligerence. On October 6, following his return after the two-day tour of Assam and Nagaland, home minister Patil did a post-mortem of the situation. Apart from deciding to rush around 5,000 additional central forces to Assam and Nagaland, he has okayed the use of Indian Air Force helicopters to track down rebel movement in the region's rugged terrain.

New Delhi's emphasis on an effective and workable coordination between the administration and the security forces in the region is not without reason. There are credible intelligence reports that groups like ULFA and NDFB have decided to expand their area of operation to places outside Assam. Late Tuesday night, the security forces recovered 5 kg of RDX from the house of an elderly man in the village of Tikrikila in Meghalaya's Garo Hills, bordering Assam. Says Meghalaya director-general of police (DGP) L. Sailo, "ULFA and NDFB rebels are active in areas bordering Assam and Bangladesh. After the recent attacks in Assam, and the rdx recovery, we have further beefed up our security mechanism."

The RDX haul in Meghalaya is being cited by the Assam police as a definite indication that the ULFA-NDFB combine is embarking on a new course, that of carrying out subversive activities in other states of the Northeast. "NDFB rebels had kept the rdx at the home of a village elder at gunpoint. This is one example that shows that the ULFA and NDFB are trying to expand their network across the region and that they are a potent force indeed," points out Assam IGP (Intelligence) Sharma.