The Earth Scorched, A Capital Clogged 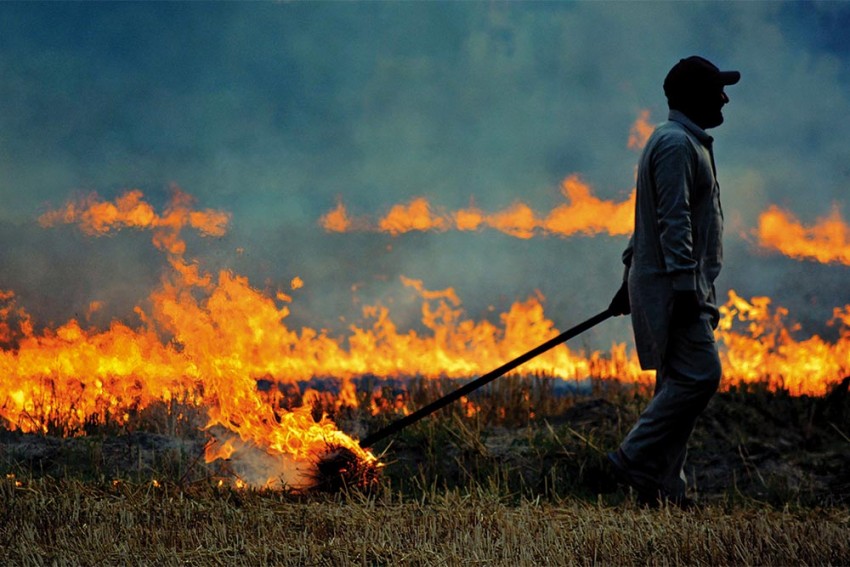 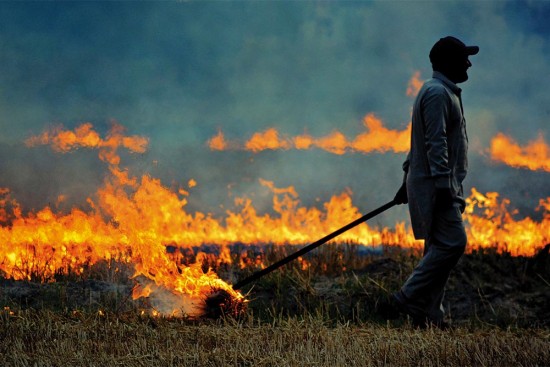 Like the smoke signals of yore, when farmers across the northern plains set afire their fields this October, theirs too was a distress call. They did not intend to send an SOS but chance, mixed with the relative newness of this practice—it became widespread over just the last 15-20 years, jolted Delhi awake with burning eyes and wheezing lungs.

A day after Diwali, Delhi was shrouded under a pall of smoke, reducing the sun  to a pale silver disc glimmering in the sky. The steady north-westerly breeze, which should clip along at 15 to 25 kmph at this time of the year, and which could have blown away much of the thick smog, laboured at a sluggish 4 or 5 kmph. A ‘depression’ over Rajasthan nullified a weak easterly breeze. And, of the three western disturbances that hit India every year, two have gone by without giving Delhi any rain. Consequently, there is less moisture than usual, say meteorologists.

“All these conditions combined to create a disastrous situation like I’ve never seen before. Crop burning has taken hold over the last few decades and this time that smoke combined with dust from Delhi’s construction activities and the residue of crackers. It settled close to the city’s floor, blocking out the sun,” says Jatin Singh, CEO, SkyMet, a private firm that provides weather forecasts. “The northern plains became a post-industrial climactic dystopia—but without the wealth that goes with industrialisation”. Singh, like many NCR residents, notices another big change this year. The eye-burning fumes in Delhi’s air, before CNG was introduced, were always attributed to traffic. Now, it is all about changing agricultural practices.

So intense was this year’s crop burning that it propelled the Centre into action. It is working out a policy on crop burning and seeking alternative uses for crop residue, such as fertiliser. “The Centre is monitoring crop burning regularly, even thrice a week at times, and we monitor ISRO images. We want to address the problems in Uttar Pradesh, Punjab and Haryana so that pollution from crop burning shouldn’t happen in 2017,” Union minister of state for environment Anil Dave told Outlook on the day the Supreme Court asked the Centre for a common minimum programme to tackle air pollution, and to respond within 48 hours to what it called an emergency.

Indeed, once Delhi woke up to smell the smoky fumes, the attention has turned to farmers of the three states. Earlier, harvesting was by hand, which left little waste. Nor did unseasonal dust clouds balloon over the Indo-Gangetic plains. With combine harvesters plucking the ripened wheat in days, not weeks, the dust and chaff now rise every four months. Also, farmers can barely cope with the large amounts of crop residue now—they simply burn it and hurry into the next season. 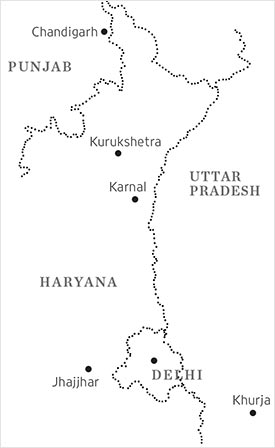 “This is because the government has encouraged only wheat and rice cultivation as part of the PDS,” says Punjab farmer-activist Ajay Jakhar. “Farmers burn fields to keep their window of harvesting narrow. They seek to reduce the time between harvest and sowing to 48 hours, when it earlier took a month. Burning fields is their only way to cater to the growing demand for foodgrain. But this smoke enters Delhi with the north-westerly breeze,” says Naveen Rathee, a farmer in Bhaproda in Jhajjhar district, Haryana.

It’s not that the farmers don’t know the ill-effects of burning crop residue, says Rathee. They know it causes suffocation and destroys natural soil manure, kills worms and insects that keep crops healthy. Yet it’s still done, for farmers are striving to raise productivity by aiming at three harvests a year.

“Farmers must stop burning fields, but their problem is they can’t sow unless fields are cleared. Not doing so lowers yields, intolerable in a scenario of declining agri incomes. Done right, urea mixed with water can clear fields, but that’s time-consuming and raises costs. Aag wala kaam—fire—is quick,” says Diwan Singh, a rice-grower from Basthali village in Karnal district of Haryana.

This month, Haryana issued 1,406 notices to farmers who burned fields, collecting Rs 13.75 lakh from the Rs 2,500-per acre penalty. Yet, the burning doesn’t stop, partly because there’s no law against it. The Centre is now planning a new policy to guide states on what to do during future burning ‘seasons’.

“Eighty per cent of Delhi’s pollution is generated in Delhi—from petrol, diesel, coal, burning dry leaves and early-­mor­ning waste-burning,” Dave says. The most har­mful elements of air pollution—PM2.5 and PM10—are a result of fuel consu­mption or dusty roads. “Delhi gover­n­ment must take responsibility for these,” he adds.

In fact, this is common knowledge among farmers across the north, from UP’s Terai to the flatlands of Haryana. As Tejbir, another Basthali farmer, says, “Pollution is more an issue in Delhi. Here, some fields are burned because the farmer has no other choice. Even then, there’s not as much pollution here as in Delhi.”

That may be so, but farmers are also awaiting a solution. For, the smoke rising from nearby fields chokes even villagers. “Earlier, farmers grew one or two crops, now they aim for three. They cannot afford losing time or money. There should be a long-term solution to the problem, not just fines,” says Gaurav, a farmer in Nighdu village in Haryana’s Kurukshetra district.

Suresh Pawar, a farmer from Mundhal vil­lage in Jind, also in Haryana, says, “Far­mers are majboor...hapless. Combine harvesters leave behind roots in the soil. They obstruct the water flow in fields and cut farmers’ feet with their sharp ends. It is a very big problem here. Nobody keeps lab­our for clearing fields as it costs Rs 4,000 per acre, twice the rate three years ago,” he says. “Gaon me bhi aisa haal hai...villages too are filled with smoke, like cities are,” he laments.

Rural India isn’t taking Delhi’s accusations of causing pollution lying down—it is also seeking earnest interventions. “Paddy residue cannot feed farm animals, for it can make them sick,” says Rathee. At most, it is supplied to gaushalas to prepare a feed mix, or to packaging material manufacturers. Here, too, the onus of storage and collection is on farmers—it costs Rs 2,500 per acre to clear and carry away the residue to end users, which is beyond the means of most.

“We hardly grow paddy or wheat in this part of UP, so burning is rare. But the brick kilns all around Delhi emit tonnes of smoke that blows into my town. Delhi should talk about non-clearance of agricultural dues and of farmers living on credit, while incurring huge losses,” says Upinder Singh, a farmer from Amroha, Uttar Pradesh.

Others, too, acknowledge that rural India is choking under the weight of emissions—dusty roads, and, not the least, car emissions. Perplexed and troubled, they blame cities like Delhi and Gurgaon. “There may be some who burn wild grass in rural UP. There are emissions from pottery units in Khurja too. But both the foodgrain sown on fields and the pottery is mostly supplied to Delhi. Even brick kilns cater to Delhi-NCR. We are ingesting fumes for Delhi and also from Delhi,” says Col J.P. Singh, a farmer in Bulandshehr.

The Centre now plans to circulate a monthly calendar advising states to curb road construction between October and November, as burning coal and tar during these foggy months is known to exacerbate smog. Delhi government, too, has risen to the occasion. Surprise checks and bans on thermal power aside, it’s trying to stop fires in garbage dumps.

“This is not about Delhi versus Punjab or Haryana but a problem of the entire North. We have to tackle the problem, but nobody will be able to control it in a year—we need long-term solutions, including getting people to use fewer private vehicles, bursting no crackers, and much more,” says Dr M.P. George, a scientist at the Delhi Pollution Control Board.

V.M. Singh, convenor, Rashtriya Kisan Mazdoor Sangathan says, “The very fact that farmers are burning fields shows the tremendous distress they are under. After all, it hardly happened 20 years ago.”

Bharat versus India is a familiar trope—but it was confined so far to a pastoral, homespun Bharat sometimes at odds with a growing, democratic India. After Diwali, as ‘particulate matter’ numbers floated up, this trope has insinuated itself into the big pollution debate. Sure, smoke wafted into Delhi and Gurgaon homes, but it only proves that somewhere there’s a fire too.

By Pragya Singh with Bula Devi