Rahul is Sonia's choice, but the Indira halo is around sister Priyanka 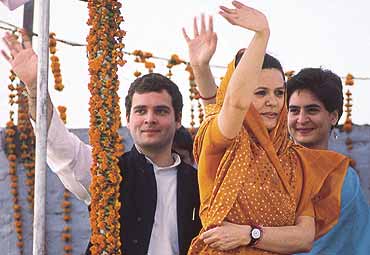 outlookindia.com
-0001-11-30T00:00:00+0553
When Congress MLAs from UP met party president Sonia Gandhi last fortnight, it was only to be expected that the subject of Priyanka Gandhi Vadra's induction into active politics would crop up. Post-Gujarat, nervous Congressmen (like former UPCC chief Sri Prakash Jaiswal) have been telling the press that it was incumbent on the Gandhi siblings to rush to the rescue of the party in a time of crisis. But the meeting ended on a note of sycophancy, with the MLAs assuring Sonia that the children were welcome but not necessary.

Although it's widely acknowledged that Sonia's foreign-origin tag makes it difficult for her to carry conviction with voters high on Hindutva, no one has as yet openly suggested that the solution is the induction of one or both of the Gandhi scions. Privately, many of the younger leaders are convinced that the entry of Priyanka or Rahul would boost the party's morale and provide the Congress with the only possible answer to Hindutva's emotive appeal. They are "pure swadeshi" and unsullied by scandal.

Rahul has shifted to Delhi after a long stint in London, first with a securities firm and then running his own business, but shows no signs of joining active politics. Right now he runs a software business and looks after the family farmhouse in Mehrauli. He is also part of the capital's social whirl and is very active in the party circuit. He reportedly nurses a crush on actress Kareena Kapoor (his Latin American girlfriend having been left behind in London). More easy-going than his sister, Rahul has surprised more than one Congress leader with the range and depth of his knowledge.

It's widely believed that Priyanka is the sharper of the two. But those who have interacted with Rahul say that he's well-versed in the Uttar Pradesh caste equations and understands political undercurrents. He loves reading and is currently catching up on books on the Congress and Jawaharlal Nehru. He, incidentally, helped write Sonia's Gujarat speeches, including two in Hindi. As a Congress leader puts it: "Ladka samajhdar hai (The boy is intelligent)."

The question is which of the two siblings will take the plunge. The tried-and-tested Priyanka, whose high-voltage charm bowled over the electorates of Rae Bareli and Amethi, or the shy, bespectacled Rahul, yet to be exposed to the hurly-burly of campaigning. It's widely believed that Sonia would prefer son over a daughter weighed down by marital commitments. Robert Vadra has already been compelled to publicly disown his father and Priyanka's entry into politics can only add to tensions.

Party workers, however, have seen in Priyanka a true inheritor of Indira Gandhi and it'll be hard to make them settle for Rahul. Last month, when the pro-Rahul faction—supposedly headed by Arun Singh—spread the word that he was to join the Seva Dal, Priyanka dashed to Amethi and made a media splash by championing the cause of a Dalit whose hut was demolished by a Thakur. Priyanka's presence set the alarm bells ringing for Mayawati, much to the satisfaction of the pro-Priyanka faction, supposedly headed by Satish Sharma. Gossip was that the two incidents were linked.