The dryness of being 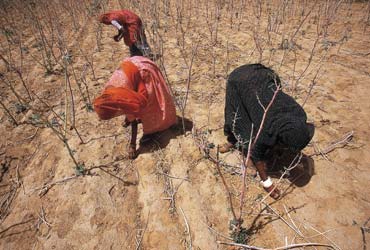 outlookindia.com
-0001-11-30T00:00:00+0553
Last year's drought is forgotten and off the headlines. But in Rajasthan, Gujarat, Madhya Pradesh, Chhattisgarh and Orissa, the alarm bells are ringing as the dry spell continues. For the third consecutive year, a severe drought is predicted for the dry districts in the states. And the prevailing marathon dry spell is showing no signs of abating as the country is gripped by its worst water crisis in recent years. A crisis that'll adversely affect national agro-economics.

Technically, the prolonged dry spell is being described as the onset of 'agricultural drought' in India. In simple terms, this is the next stage after water depletion from the soil and is manifested in a perilous shrinkage of crop area and poor vegetative growth. The failure of their crops and the difficulty in sourcing water has forced many villagers in the states to migrate. In parts of Saurashtra, Gujarat, people are migrating even from small towns where taps deliver a trickle once in four days. And buying water from private water tankers is a luxury few can afford. In the rural areas of the affected states, farmers are just giving up hope.

But at Delhi's Krishi Bhawan, which houses the ministry of agriculture, the mood is nonchalant and officials simply point out that droughts are now a recurring calamity. True to reputation, the government machinery is sluggishly going about the task of ascertaining the extent of damage to crops. There's no centralised collection of data about the total districts affected. The states too have not sent any statistical inputs in this regard, says an official. At the National Crop Forecasting Centre (ncfc), the information about the overall area under the drought is "still being compiled". Ironically, the centre was set up two years ago to obtain advance forecasts of important crops and to serve as a prime agency to monitor the crop situation. The centre has a Crop Weather Watch Group with representatives from the Indian Metereological Department (imd), Central Water Commission, Department of Science and Technology and Directorate of Plant Protection. But just how effective it has proved to be is still doubtful.

States like Rajasthan, Gujarat, Madhya Pradesh and Chhattisgarh are now grappling with a crop-crisis. All these states, particularly the first two, depend largely on rainwater for irrigation. A dry monsoon in 2000 followed by a rainless post-monsoon period has triggered a crop failure. Rajasthan has been the first to feel the impact. The entire rapeseed and mustard crop has been jeopardised. The state, which accounts for about 40 per cent of India's mustard and rapeseed production, drew a naught from its usual share of post-monsoon winter rains.

If Rajasthan (29.9 lakh hectares) is experiencing a crisis, the situation in other states like Uttar Pradesh (11.7 lakh ha) Madhya Pradesh (7.1 lakh ha), Haryana (5.5 lakh ha) and Gujarat (3.4 lakh ha) isn't very different. The total area covered under rapeseed and mustard cultivation in these states is only about 45.9 lakh ha as compared to 61.5 lakh ha the previous year for the corresponding period. The extent of damage can be gauged from the fact that Rajasthan, MP and Gujarat alone registered a sharp decline of 10, 3 and 2 lakh ha respectively in the total area under rapeseed and mustard cultivation as compared to last year's average.

Further, the most prominent rabi pulse—Bengal gram—is also facing a crisis. Out of the overall normal area of 76 lakh ha for Bengal gram cultivation, sowing is reportedly lagging behind by a whopping 20 lakh ha this year.Major producers like MP, Rajasthan and UP, with a normal area of cultivation of 27, 19 and 10 lakh ha respectively, have fallen short of sowing to the tune of 8.7, 2.4 and 2.2 lakh ha respectively. The crop situation is also grim in Orissa where over 20 districts are under a severe drought. Poor rainfall during the last monsoon had damaged 10.7 lakh ha of kharif crop.

Significantly, the drought notwithstanding, crop production was largely unaffected during the last two years. However, this time the dry spell has succeeded in parching fields all over. Agriculture scientists attribute the current crisis to a particularly bad monsoon last year followed by the continuation of the dry spell in the post-monsoon period as well. So the winter rains—which play a key role in the growth of crops in the west and northwestern regions of India—failed and marred the prospects of a good rabi crop. All the states facing the crop crisis received deficient rainfall during the monsoon and post-monsoon season. The temperatures—both minimum and maximum stayed remained above normal during the months of October, November and December—also proved fatal for the crops.

According to agriculture ministry statistics, the cumulative post-monsoon rainfall was below normal in 31 out of 35 meteorological sub-divisions of the country and the total rainfall recorded during this period is the lowest in five years. "The winter rains in the north, central and western parts of India is created by weather systems that develop in the Arabian Sea or Bay of Bengal. This year, however, after monsoon not a single strong system was formed, as a result, the last three months of 2000 didn't witness any significant rainfall," says S.C. Gupta, director, imd.

THe 2000 monsoon was no better. Officials at Mausam Bhavan may have proudly proclaimed that their prediction of a 'normal' monsoon turned out to be technically correct, but the ground reality is quite different. "Proving the monsoon was normal by arriving at a figure through calculations doesn't solve the problem. The distribution of rain has to be even and regular over a period of time. Floods in some regions and drought in others may make for an average normal picture, but doesn't neutralise the devastation," says a senior department of agriculture official.

To add to the problem, groundwater levels in the drought-affected states have sunk to alarming levels. According to Central Ground Water Board (cgwb) officials, over 80 per cent of the total groundwater drawn every year in India is spent in the fields, the rest is used for drinking purposes. "Due to successive droughts, groundwater resources have been overused to save the crops. And there has been no replenishment of ground stocks. Now, the levels have fallen to such an extent that leave alone availability for agriculture, there is no water even to drink," say the officials. "If such conditions continue, we may experience a national calamity where both agriculture and human lives will be endangered in the parched states," they add.