The Drone Across Asia

Global recession spawns a lot of talk but, alas, no wisdom 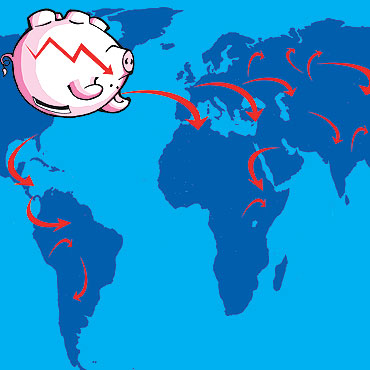 outlookindia.com
-0001-11-30T00:00:00+0553
The Asian Development Bank's annual meeting is a mammoth event, where the bank's officials congregate with central bank chiefs, ministers and economists from all over the world to discuss economic policy. The one distinct feature of this year's meet, held in Bali, Indonesia, in May, was the obsession with the financial crisis. No matter what the topic of the session, the discussion seemed to veer around to what will happen to global finance and what we should do to stem the deepening recession.

This is understandable. By some estimates, the total loss incurred by the global banking sector is over $4 trillion, inter-bank lending is sluggish and all this is affecting the real economy. Incomes are declining in virtually all industrialised nations. Unemployment in the United States is at a record high, and all over the world, India included, unemployment is on the rise.

What is alarming is how little we understand about this phenomenon. This was nowhere more evident than in the high-powered Governors' Seminar at the Bali conference. The speakers so often took cover behind medical terminology—the crisis was like a new "virus", it was spreading from one nation to another like an "infection"—that, at one point, Nik Gowing of the BBC, who was chairing the session, interrupted to clarify that in case some people in the audience had just woken up, there was no need for alarm for we had not switched to discussing the swine flu.

A session that was interesting was one where senior executives from Standard & Poor's discussed their new investment rating system for the ASEAN nations. Thanks to uncertainty and lack of information, cross-border credit flows remain minimal and this creates inefficiencies. Interest rates in Indonesia are high; interest rates in Malaysia are relatively low. If credit moved from Malaysia to Indonesia, it would naturally benefit both sides.

The new rating system for East Asian nations is meant to provide inter-country information and facilitate credit flows. Interestingly, this new rating system is supposed to provide greater "granularity" than the system used in the US and Europe. In other words, investments would be graded into a number of categories. This is desirable for an interesting reason; it will cut down the scope for "rate inflation".

Rate inflation is an ill-understood concept, so let me explain. In recent years, the fad has been to pool together different kinds of loans and create new "tranches". Suppose a bank gives out loans to home buyers, some of whom are safe and some risky. What banks do nowadays is to put together different combinations of these loans and sell off these tranches or collateralised debt obligations, and it is these CDOs that get rated.

This mixing and matching of debts gives rise to rate inflation. Very simply, suppose a bank gives out 100 loans which are safe, of quality AAA(the top rating), and another 100 which are relatively risky, of quality AA+. Suppose the safe ones are so good that creating a package of one safe and one risky gets the package a rating of AAA. Then, by creating paired portfolios, the bank can sell off all its debts as AAAS.

In the world of finance, where billions of dollars are involved, such rate inflation can cause—and arguably has caused—huge investment errors. This has no doubt fed into the present crisis. But this is no more than a small part of the huge jigsaw puzzle that is the global crisis, our understanding of which remains embarrassingly rudimentary.

Postscript: While, as must be evident, I do not have much advice to offer on global finance, I do have a useful tip for personal finance. If you happen to be in a grand hotel but, like me, feel uncomfortable amidst such luxury, then this is for you. One dilemma in such situations, as I discovered on my arrival in Bali, is the crazy price of incidentals. It would not be uncommon for an apple and a bottle of water to cost Rs 500. But there is really no need to pay this. Just put on your sneakers and walk over to the hotel's gym. There you will find a pile of apples and plenty of drinking water. The only cost is, in case someone else is there, you may have to do some exercise before digging into the supplies. (It is possible the other person is also faking exercise to get to the apples but you can never be sure.) This will not make up for the global financial loss, but, during a four-day hotel stay, a twice-daily visit to the gym can yield a tidy saving.