The Dominos Are Set

If the BJP fails in the polls, it could have long-range effects 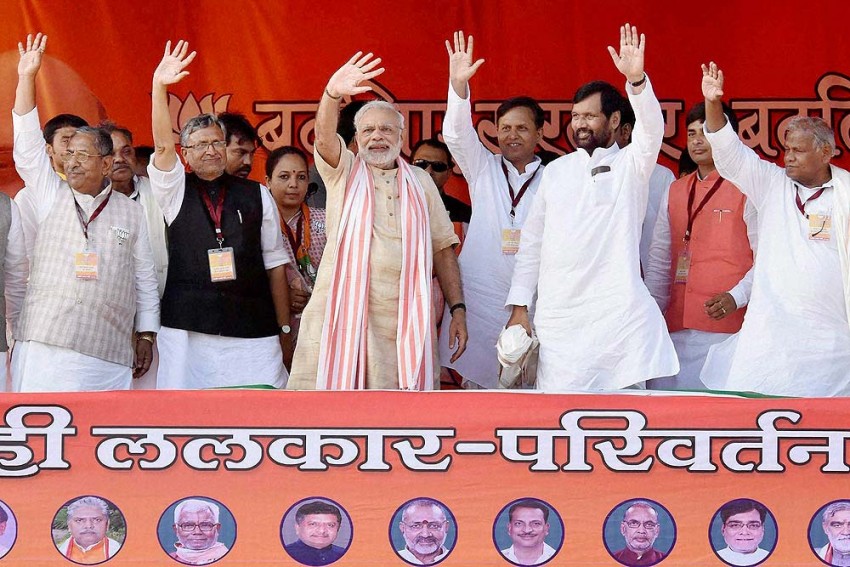 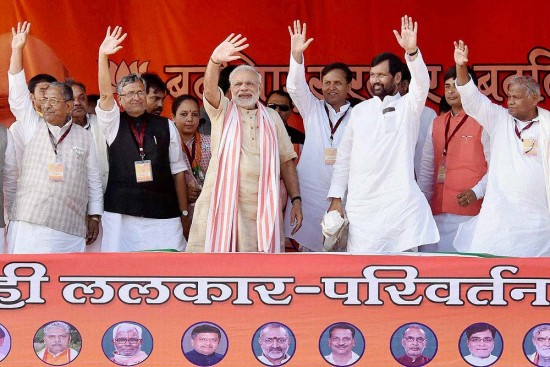 Bihar, on the eve of the polls, is a carnival of hoardings, a cacophony of speeches, a collation of rallies, a stream of allegations and counter-allegations. Beneath this fervid electoral energy, there is at stake not only the future of Bihar but also, in a sense, the future political narrative of India. For the BJP, a Bihar win would prove an end­or­sement of Narendra Modi’s brand of politics, a doorway to victories in the polls to follow in Uttar Pradesh, West Bengal and Assam. For the JD(U) and its allies, the RJD and the Congress, victory will signal the first roadblock to the Modi rollercoaster. It will also signal the beginning of changes in the BJP and colour the results of the 2019 general elections.

In the 2014 general elections, the BJP and its allies of the NDA together won 31 of the 40 seats in Bihar. (The BJP itself won 22.) But things have changed dramatically in 2015. First, Modi’s image isn’t what it was in 2014, when an effectively planned and expensive, hi-tech campaign had presented him as a prince charming riding an anti-inc­umbency wave, with eloquence on his side and promises by the dozen on offer. But this year, a great many are asking: what happened to all those promises? Why is it that you never thought of Bihar since you came to power, suddenly surfacing only on the eve of elections? There’s also considerable resentment among farmers over the ill-advised Land Acquisition Bill and general disappointment over rising prices, poor job creation and an economy that hasn’t taken off despite all those promises. And now, after RSS supremo Mohan Bhagwat’s statement, there is the threat that reservations, which have provided an avenue of assured upward mobility to many of Bihar’s marginalised and dispossessed, will be withdrawn.

The Rs 1.25 lakh-crore package that Modi announced has had a mixed response. Chief minister Nitish Kumar has convincingly rubbished it as a sterile repackaging of old projects. Modi alienated many by announcing the package like a grand auctioneer putting on stake Bihar itself. Some of his barbs—questioning Nitish’s dna and calling Bihar ‘Bimaru’—have unleashed a counter campaign asserting Bihari swabhiman. Lakhs of people have already provided nail and hair clippings to be sent to the PMO, challenging him to prove that the dna of Biharis is faulty.

Another key difference between 2014 and 2015 is that last year, opposition to the BJP was divided. Even so, the opposition collectively got a larger percentage of the votes, but since it was divided, the BJP reaped dividends. What happens when the opposition unites was demonstrated within weeks of the parliamentary elections. In byelections to 10 assembly seats, when the JD(U), RJD and the Congress fought together, the BJP was worsted, winning only four seats with difficulty.

This time, that nascent show of unity has crystallised into a carefully planned mahagathbandan or grand coalition. This was the biggest worry for the BJP. First, its leaders said the JD(U) and the RJD, given past animosities, could never come together. When that happened, they said the coalition could never agree on the choice of chief minister. To their surprise, this was smoothly achieved with Laloo himself endorsing Nitish for the post, with the full support of the Congress. Their final hope was that the coalition would come apart over division of seats. Here too, they were destined to be disappointed. After a series of high-level meetings, it was agreed that the JD(U) and the RJD would fight 100 seats each, the Congress 40 and the ncp three. Later, when the ncp backed out, its seats were given one each to the three allies.

Even when the opposition was divided in 2014, it gathered a large part of the vote. United now, it could give the BJP a tough time.

The positive development for the maha­gathbandhan is that there seems to be very substantial transfer of votes between the alliance partners on the ground. To be honest, there was a fear that this transferability may not happen, in which case unity at the top would amount to very little. But now reports confirm that the cadres of all three parties are working in tandem. It is also unlikely that the that the so-called ‘Third Front’, comprising the Samajwadi Party, the ncp and the likes of Pappu Yadav and Sadhu Yadav, will make any real impact. The Samajwadi Party has no electoral base in Bihar; in the last elections, all  its candidates save one perhaps lost their deposit; the ncp has one MP, Tariq Anwar, and neither he nor Owaisi will dent the bulk of the Muslim vote; Pappu Yadav did have a following in the Kosi belt among the Yadavs, but this time all reports indicate a very strong Yadav consolidation under Laloo.

The BJP’s strategy is to play the development card, but much of the sheen of this slogan has rubbed off, given the performance so far of the Modi sarkar. Moreover, on the development front, it has to match the verifiable achievements of Nitish, whose developmental track record, with its emphasis on growth with justice, has touched the lives of Biharis, especially the poor and the marginalised. When a state clocks the highest annual growth rates in the country for five years consecutively, and when during this period the state’s GDP and per capita income double, thereby reducing the number of those below the poverty line from 54 per cent to 34 per cent, it is very difficult to posit development as a counter to Nitish.  The achievements on account of vikas attributable to Nitish are visible: over 66,000 km of roads and 5,000 major bridges, an increase in power generation from 700 MW to 3,400 MW, dramatic improvement in education and health indices, and a new boost to agricultural productivity. In addition, he has a concrete blueprint for the future in the form of a seven-point programme to provide piped water, roads, and electricity for all, apart from specific schemes for the benefit of youth and women. It is no surprise then that even after nine years of incumbency, every poll shows Nitish way ahead as the first choice for the post of chief minister.

The BJP will harp on the issue of the return of jungle raj, but crime rates have actually fallen during the last eight months when Nitish has been the CM with the support of the RJD. In fact, according to the National Crime Records Bureau (NCRB), there are 21 other states with crime rates far above Bihar, and these include Gujarat, Madhya Pradesh, Rajasthan and Chha­tti­s­garh. Most people believe that with Nitish at the helm, the primacy of law will prevail; the fact that but recently he put two of his own MLAs facing criminal charges behind bars only adds credence to this image.

The BJP’s real problem is that its vote base is shallow, restricted to segments of the upper castes, hardly forming some 11 per cent of the population. It is for this reason that the BJP needs alliances with Ram Vilas Paswan, Jitan Ram Manjhi and Upendra Kushwaha. However, after the seat distribution, there is considerable internal divide and acrimony in the alliance partners. This acrimony is visible in the BJP itself. From Shatrughan Sinha to R.K. Singh to other prominent leaders, the voices of discontent are only getting louder. There is a perceived feeling that Bihar is being sought to be run by BJP chief Amit Shah from Gujarat, ignoring local aspirations. Amazingly, BJP hoardings in Patna show two leaders from Gujarat—Modi and Shah—and no face from Bihar!  The fact that the BJP has no chief ministerial candidate adds to the image of a rudderless party entirely dependent on the fading appeal of Modi.

There are apprehensions that the BJP, aware of this situation, will resort to blatant use of money power and communal polarisation to try to push through. We have already alerted the Election Commission on this matter. Given a level playing field, there is little doubt that the mahagathbandhan will win in Bihar. As I began by saying, this result will reverberate across India.

(Pavan Varma, a former IFS officer, is a JD(U) MP. Among his books is The Great Indian Middle Class.)

Borivili On The Bronx