With the PDP silent on its ‘self-rule’ agenda, NC’s Farooq Abdullah goes all out for autonomy in J&K 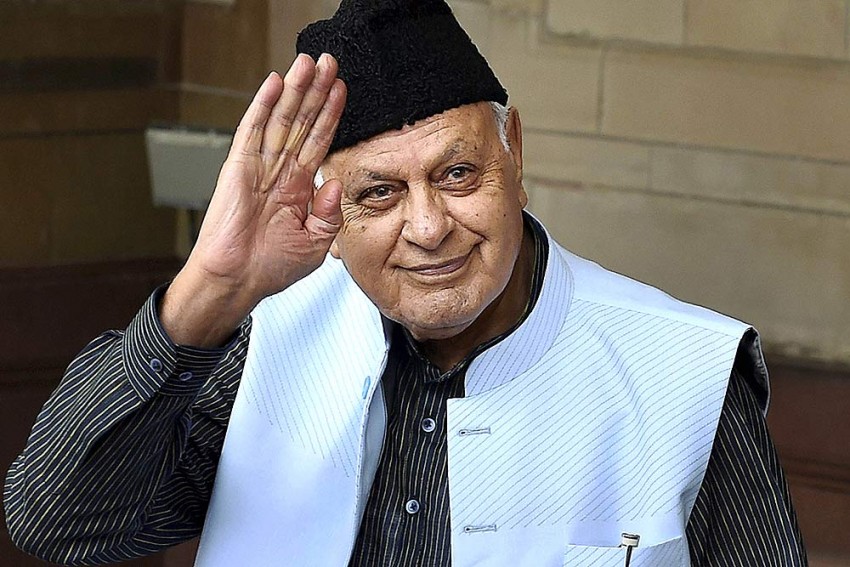 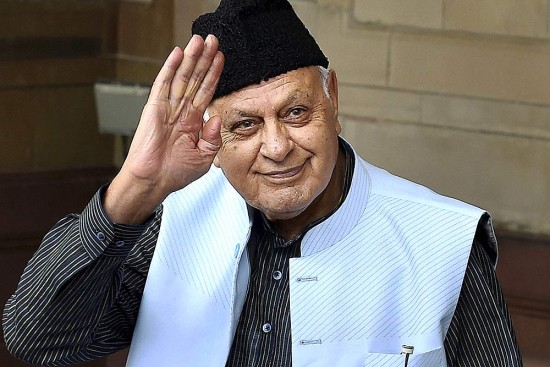 Unlike all others in Jammu and Kashmir’s grand old party, the National Conference (NC), its patron Dr Farooq Abdullah is trying to come across as more statesman than politician, creating ripples outside the state too. Of late, he has been urging India and Pak­istan to find a solution to the Kashmir issue without trying to wrestle away each other’s territ­ory, which could devastate the entire region. “Yes, it (PoK) belongs to them (Pakistan). It has been with Pakistan for the past 70 years. You haven’t been able to take it back, what will you do now?” asks Farooq, who tur­ned 80 this year.

But the separatists—who see Farooq as a lead player in what has unfolded in Kashmir since the allegedly rigged 1987 assembly election—aren’t buying it. “People are turning away from the mainstream,” says Tanvir Sadiq, NC working president Omar Abdullah. While Sadiq blames Chief Minister Mehbooba Mufti for lowering the dignity of the CM’s office and making people lose faith in mainstream parties, others say Farooq is also responsible.

“He seems to reinforce the famous perception about his father Sheikh Abdullah, that he is ‘a tall leader who quotes the Quran and tells different things at different places’,” says columnist Z.G. Muhammad. “He also showed the world how disempowered pro-India politics in J&K actually was—despite an absolute majority in the legislature passing the autonomy resolution, nothing could be changed. Then, by continuing as the BJP’s ally, he made Kashmiris realise how amoral mainstream politics is. His non-serious­ ways robbed pro-India politics of all dignity. It was only later that Mufti Mohammad Sayeed and Mehbooba Mufti made it worse by allying with the BJP after fighting elections in the name of self-rule and keeping the saffron party out of power.”

Farooq, however, is trying hard to change the perception, raising slogans for the restoration of J&K’s autonomy, besides saying the LoC should be turned into the international border and greater autonomy given on both sides. The senior Abdullah condemns the Centre for not engaging with Islamabad, while Omar and the NC’s state spokesman Junaid Azim Mattu go hammer and tongs against separatist leaders such as the Hurriyat Conference’s Syed Ali Geelani. When Geelani issued a statement critical of Farooq, Omar tweeted: “Can Geelani show me his reaction to the Pak PM who has recently repeated several times that azadi is not an option for Kashmir? Hypocrisy is a Geelani trait.” Farooq, though, kept his cool and continues to call for dialogue with the separatists.

In early November, when Farooq visited areas along the LoC, he said he was pained to see the living conditions and asked India and Pakistan to stop the cross-border shelling as it was killing Kashmiris on both sides. Even as the coalition partners, the PDP and the BJP, agreed with each other on the recent decision to withdraw many cases against stone-pelters, the NC continues to focus on the political solution. 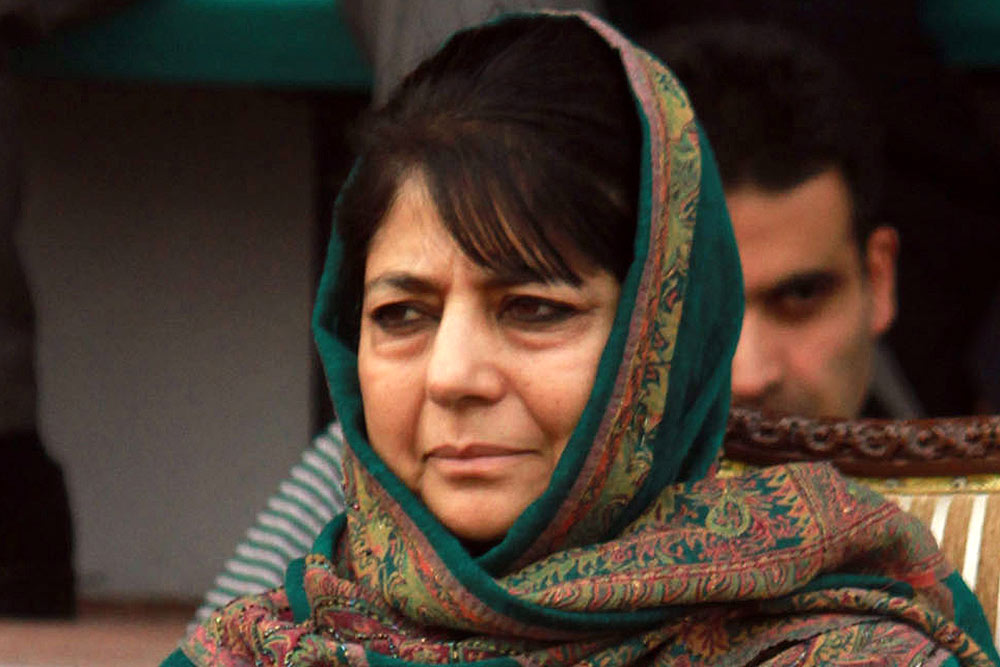 From border areas of Kashmir and the plains of Jammu to Karnataka down south, Farooq is catering to different audience in his unique and aggressive style, leaving his detractors baffled. At a rally in Srinagar last year, he said he rejected the Parliament resolution that describes Pakistan-occupied Kash­mir (PoK) as an integral part of J&K. Later, the video clip of Farooq taking on a Delhi-based TV anchor, who asked him whether he is Indian or not, went viral in the Valley. He has, of late, shown remarkable consistency, which, say J&K-based analysts, is contrary to his way of politics.

So has Farooq finally got rid of the taint of the killing of over 110 youth during the 2010 unrest, and Afzal Guru’s hanging in 2013—both of which happened while there was an NC government in J&K? Columnist Muh­ammad says Farooq’s recent speeches have left all that far behind, making many in the Valley think the NC is the only alternative to the PDP, which they hold responsible for complicity in the deaths of nearly 100 youth and thousands injured by pellets and bullets during the protests that continued for months after the killing of Hizbul Mujahideen commander Burhan Wani on July 8, 2016.

Analyst Riyaz Wani agrees that Farooq has managed to bring the NC to the centrestage of mainstream politics in J&K. “He visited Khanqah-e-Moula (shrine of Said-ul-Auliya Mir Sayyid Ali Hamadani in Srinagar) after it caught fire one night in November and there was no protest, even as Mehbooba had to face protests in which people raised pro-azadi slogans,” says Wani.

Then, on December 10, Farooq add­ressed a rally at Tumkur, Karnataka, with former PM H.D. Deve Gowda seating next to him. He recalled that when Deve Gowda was PM, the Centre was keen on restoring J&K’s autonomy and, had the government been in power long enough, it would have taken concrete steps in that direction. “It is important to address the political sentiment in J&K and a pol­itical consensus at the national level on this is crucial,” says Farooq. “New Delhi cannot avoid talking to Pakistan to res­olve the Kashmir issue and it should also talk to all shades of opinion within the state, with sincerity of purpose and utmost seriousness.”

Sadiq doesn’t agree with the general perception of Farooq being inconsistent in his views. “It’s a lie that he speaks one thing in Kashmir, another in Jammu and total opposite in Delhi. If you compare his speeches in the border areas with his addresses elsewhere, you will see how unwavering he is in his stand. His position is our party’s position,” says Sadiq, who insists that the NC has always been loud and clear on its agenda. “Didn’t Omar sahab as CM tell then PM Manmohan Singh, when he visited the Valley, that Kashmir is a political, not economic, issue? But when Mufti sahab (Mufti Mohammad Sayeed) as CM tried to tell the same thing to PM Narendra Modi during a rally in Srinagar, he was snubbed and the PDP stopped talking about Kashmir as a political issue.”

The PDP has indeed maintained sil­ence over the ‘self-rule’ agenda that was the crux of its electoral campaign, while Farooq is going all out popularising the autonomy slogan of his party. Former J&K home minister Nasir Aslam Wani of the NC, who accompanied Farooq to the border areas in November, says what Farooq is saying is the party line. “There is no confusion in the NC about autonomy, talks with Pakistan and internal dialogue,” says Wani. He says the NC talks about “no governance in the state as PDP has failed to conduct panchayat or parliamentary polls in South Kashmir” and against the CM “reducing the J&K government to Delhi raj”.

While Farooq takes on the Centre, spokesman Mattu is in forefront of the party’s charge against the separatists. “Geelani issued statements against us, prompting counter-statements. We don’t ­hes­itate to call a spade a spade. Our party believes it has a duty to safeguard the state’s interests,” says Sadiq, who also admits that Farooq’s statement in which he had pledged support to the Hurriyat did enrage Omar. “Omar sahab was so angry, he said thousands of NC workers were killed due to sep­aratist politics.”

Moderate separatist leader Abdul Gani Bhat says Farooq is “steering aptly in an unfolding great game being played out in South Asia as the China-Pakistan axis is likely to compel India to hold talks with Pakistan over Kashmir”. Farooq, according to Bhat, foresees the change and “knows that when India and Pakistan start talking, they will arrive at some conclusion on Kashmir, which can even be autonomy or more. He deserves to be applauded.”

According to Ishaq Qadri, former J&K advocate-general and head of the NC’s legal cell, Farooq has infused new life in the NC. “The party is confident and has firm faith in its political slogan of greater autonomy,” he says, arguing that with elections three or two years away, it won’t be tough to make people see the NC as the only party that can safeguard the interests of the people of J&K. “In fact, the PDP-BJP alliance has made this possible.”