The Djinns Of Conceit 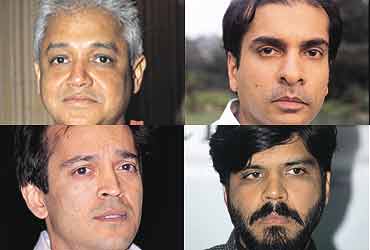 Divide-and-Rule is an old British sport. Once, Winston Churchill warned Indians against following Mahatma Gandhi on the grounds that Gandhi represented the Indian poor less reliably than did Churchill himself. Now comes William Dalrymple, who in his review of Pankaj Mishra's An End to Suffering: The Buddha in the World (Outlook, November 8) instructs us on which Indian writers we may trust and which not. He thus dismisses "the St Stephen's mafia and the Doon School diaspora" who presume to "lecture the world about South Asia from the sanitised safety of an East Coast campus". These elitists, says Dalrymple, must bow down before writers born in the mofussil who (in his colourful phrase) know the "grim reality of the boondocks of Bihar".

Born to privilege, you cannot understand India; reared in a humble home, you must. This is Dalrymple's thesis, to buttress which he offers two names: Sunil Khilnani and Pankaj Mishra. He is pretty vicious about Khilnani, possibly in retaliation to a piece where his nemesis wittily described Dalrymple as having invented a new genre: 'Bollywood history'. But the fact is that, whatever his class origins, Khilnani has given us The Idea of India, which illuminates India's modern history more wonderfully than any other work of literature or scholarship.

Which shouldn't surprise us. For it is how a writer tackles his subject that is important, not where he studied or lives. Orwell went to Eton yet wrote with insight about the British working class; was an Indian police officer yet exposed the underbelly of imperialism. Birth in Brahmin homes didn't prevent Mahasweta Devi or Shivarama Karanth from writing with searing honesty about the iniquities of caste.

Dalrymple's argument is mischievous as well as wrong-headed. His dig at the 'Doon School diaspora' is calculated to stimulate prejudice and envy among his readers, sentiments that would quickly disappear were the category made more specific. For the major diasporic writers who studied at the Doon School are Vikram Seth and Amitav Ghosh. Both have displayed in good measure the writerly qualities Dalrymple says he prizes: honesty, hard experience, intelligence and learning. (As well as others he does not consider: such as intellectual ambition, linguistic skill, and the ability to reach inside and understand a culture not your own.) No one who reads From Heaven Lake or In an Antique Land would know—or if he did, should care—that its author studied at an elite public school. If the school is relevant, it is only in the sense that Seth and Ghosh have so completely moved beyond the social biases commonly associated with it.

I wonder if Dalrymple has considered the larger implications of his argument. If artistic merit is merely derivative of social class, then perhaps Satyajit Ray's films should all be junked. And if you are more honest the more modest your beginnings, then Laloo Prasad Yadav must be a more trustworthy politician than (say) Jawaharlal Nehru.

The Dalrymple thesis is also less than fair to its presumed beneficiaries. Pankaj Mishra now divides his time between London and New York. Since he is no longer a mofussil writer, must we then take his writing less seriously? Of course not. As before, we must judge his work only on the basis of what he writes and how he writes.

It's a bit rich to be lectured on what constitutes good scholarship by one whose own knowledge of this country is so superficial. For Dalrymple is no Verrier Elwin or Jean Dreze, a Western-born writer steeped in the culture, politics of the people he might critically write about. His writings on India are littered with errors. Thus the City of Djinns claims that the novelist Ahmed Ali desperately wanted to return to Delhi from Karachi, but was prevented by the Government of India from doing so. In fact, the borders were porous for several years after Partition, and many Muslims—Communist Sajjad Zaheer and classical vocalist Bade Ghulam Ali Khan among them—moved back after initially migrating to Pakistan. Again, in a recent essay in the Financial Times, Dalrymple claimed that the Indian Council of Historical Research was the desi equivalent of the British Academy. This is either a gratuitous insult to the British Academy or, more likely, betrays an ignorance of two intellectual cultures, one ours, the other his own.

To the evidence of print I might be allowed to add a personal anecdote. When I first met Dalrymple, it soon became clear that this 'India expert' did not know who Dr B.R. Ambedkar was. Yet the media allows him to set himself up as the arbiter of literary taste in India. I suppose it is this combination of (their) arrogance and (our) deference that encouraged the British to claim an empire. It seems worth remembering that they also lost one.

Now, Fear Is The Right Key