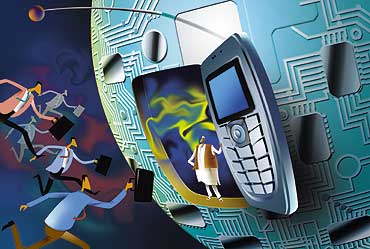 The big boys are in battle mode, and they’re taking it to the highest political level. In the past month, three telecom CEOs—Tata Group’s Ratan Tata, Hutchison Essar’s Asim Ghosh and Bharti’s Sunil Mittal—have shot off letters to the prime minister’s office. Their objective: to subtly influence the forthcoming telecom policies.

At stake in Act III of the telecom tussle is the introduction of new technologies (like 3G and Wimax) and other high-margin value-added services, the ability to expand subscriber base to log in volumes, and the race to become one of the top three service providers. Right now, the government can make or break the future of most telecom firms by a stroke of the pen. Perhaps why the lobbying this time is more open, more vocal and directly aimed at competitors.

On March 29, the wireless planning coordination (WPC) wing of the DoT announced its spectrum allocation mechanism. The amount of spectrum with any service provider ensures the traffic it can handle; the higher the spectrum, the higher the volumes it can handle and, hence, larger the subscriber base. The WPC order stated that the number of active existing subscribers would form the basis for determining the allocation of additional spectrum. It added that only those who had a specific number of customers would be eligible.

Telcos like Bharti and Reliance Infocomm, with a huge subscriber base of 20 million and 19 million respectively, were elated. But those like Tata Teleservices—with one of the lowest numbers among the top telcos—were miffed. For the policy meant that while the former would get additional spectrum, the latter wouldn’t qualify. It implied the Tatas would neither be able to expand existing networks nor be in a position to immediately offer 3G (allowing high-speed real-time voice, video and data communications) which needs higher spectrum.

The situation seems worse for the Tatas as the telecom ministry is expected to announce guidelines for 3G and Wimax later this year. Competitors like Reliance, Hutch and Bharti have already spruced their back-end to be 3G-ready and contend that they will be ready to roll out the new services as soon as they get the additional spectrum. It was clear—if the Tatas didn’t stall the WPC guidelines, they’d finish last in the semifinals of the telecom sprint.

Ratan Tata shot off immediate missives to J.S. Sarma, secretary, DoT, and then the PM. He accused the other service providers of inflating their subscriber base and felt the policy to allocate spectrum on the basis of self-proclaimed figures—in the absence of a verification mechanism—was unfair. He added: "By design or coincidence, the (subscriber) cut-off level singles out one pan-India provider which would be deemed to be ineligible for additional spectrum...." He was also peeved that the order didn’t guarantee spectrum once Tata Teleservices crossed the specified threshold limit.

So, Tata decided to change the rules of the game. He said that since additional spectrum was precious and in short supply, it should be sold to the highest bidders. He even offered to pay Rs 1,500 crore for this. That set the cat among the pigeons and the other players were up in arms. Predictably, the more sharp attacks came from the GSM lobby; the Tatas had the competing CDMA.

Within weeks of Tata’s letter to the PM, the COAI and GSM chiefs penned their own plaints in a desperate move to keep the current spectrum policy intact. In his letter to the PM, Hutch MD Asim Ghosh said: "From the earliest licences, spectrum, being a scarce resource, has been allotted.... It has never been made available to purchase and hoard as a commodity, without a demonstrable need." Argues another chief of a leading service provider: "They (the Tatas) agreed on the existing terms when they got into the sector. Now, they feel that the policies are not right. You can’t agree to the terms and then start cherry-picking on issues and ask for changing them."

Picking on Tata’s indignation against the subscriber-linked allocation, COAI’s D-G T.V. Ramachandran said: "The system has been in place since 2003. How is it that he has woken up now? If subscriber figures were fudged, how have the revenues increased?" Almost all the big GSM  players think that the current policy is fair. As one of them complains, "We had to bid (for different circles) and got a patchwork of licences across the country. They (the Tatas) got a nationwide licence in one go. Yet they feel they are disadvantaged and want to change the rules of the game. The policy is fair and as clear as it could be. There is no room or need to change it now."

However, Tata contends that the existing policies are loaded against the CDMA players and, therefore, have a technological bias. For instance, the current system has a 2:1 spectrum allotment in favour of the GSM players on the ground that CDMA was a more spectrum-efficient technology. "This is irreconcilable, particularly in a technology-driven industry.... To curb the introduction and usage of such new technologies to ‘equalise’ or ‘protect’ users of older technologies will have a devastating effect on the overall technological progress in the country," he said in his letter.

Adds Mukund Rajan, VP, Tata Sons, and a director of VSNL and Tata Teleservices, "Everything was equalised in 2003, when the unified licence came in. Then why is there a discrimination on the basis of technology? It’s the government’s responsibility to make available the raw material (spectrum) for us to perform. There is lack of foresightedness on the part of the authorities...which is resulting in such adhoc measures. This (WPC) order should be kept in abeyance till a firm and transparent policy is put in place."

But, in his usual diplomatic manner, Mittal disagreed with Tata. In his letter to the PM, he said, "I have been long enough in the industry to understand the implications of technological developments.... It is not my case to restrict spectrum availability to those who have chosen the non-standard technologies, but I do make a strong appeal to you to ensure that GSM...does not get stifled on account of any misinformation."

What is surprising is that, in this fight between the GSM and the CDMA players, Reliance Infocomm, which should ideally side with the Tatas as it uses CDMA technology, hasn’t reacted at all. Sources say the reason is that Reliance is in a win-win situation either ways. If the WPC order is accepted, it’ll get the additional spectrum. And if the government decides to sell spectrum, it has the war chest to pay for it. Thus Reliance Infocomm’s Anil Ambani, who has been embroiled in several controversies in the recent past, is shying away from this one. At least until he’s forced to take sides.

Now the government, which offered to open up more spectrum, has to take a decision. It has set up a Group of Ministers (GoM) to finalise the modalities on how the defence ministry, which occupies the bulk of available spectrum, can vacate it. The GoM, headed by defence minister Pranab Mukherjee, is expected to meet later this month. It will be interesting to watch which lobby wins this bitter battle—GSM or CDMA , Tata, Ambani or the Mittal-Ghosh combine.