The Diaspora Is Inside

Our millions of internal migrants are internal fodder. They must be saved. 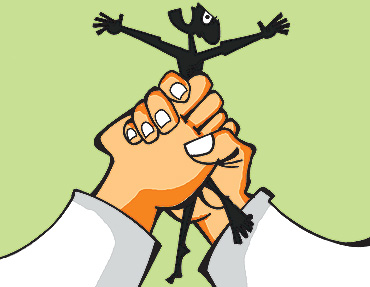 outlookindia.com
-0001-11-30T00:00:00+0553
In 1956, Solomon Bandaranaike faced an election in Sri Lanka that he desperately wanted to win. So he jettisoned the country's three-language policy (Sinhala, Tamil and English) and promised to make Sinhala the official language of the country—and duly won a landslide victory. It was an act of pure political opportunism, for Bandaranaike was anything but a Sinhala chauvinist. But it sowed the seeds of a Tamil rebellion that has now lasted for 25 years and all but destroyed the island nation's economic and political future. Today, a similar act of pure, callous political opportunism threatens the future of India.

Raj Thackeray has not suddenly discovered that there are large numbers of north Indians in Mumbai. They were there long before he was born. A study of Mumbai's labour force by Vijay Joshi and Heather Joshi in the early 1960s had shown that workers from Uttar Pradesh formed its second largest component even then. Today, Raj's only purpose in setting his goons upon north Indians in Mumbai is to wrest back control of the Shiv Sena from his cousin Uddhav, to whom it was bequeathed by his father Bal Thackeray in '04. What makes him specially dangerous is that his is more than an act of opportunism, it is also one of filial revenge.

His ploy is already proving abortive, but in the worst possible way. Predictably, Uddhav has responded by starting a north Indian hate campaign of his own. Thus, the goons of the Shiv Sena are now belabouring Biharis and Uttar Pradeshis with as much gusto as those of Raj's Maharashtra Navnirman Sena.

The antics of the two cousins have already been condemned by responsible politicians, and leading members of the intelligentsia in Maharashtra. On February 12, BJP leader L.K. Advani added his voice to the chorus. But so far, most of the critics have focused only on the damage the Thackerays' opportunism could do to Maharashtra. Many have drawn parallels between the cousins' campaign against north Indians and the patriarch's attack on south Indians 40 years ago, and drawn comfort from the fact that the latter had fizzled out and conferred no significant benefit on the Shiv Sena.

But 2008 is not 1968. India has changed dramatically. Thus what had remained a localised assault 40 years ago could easily become the spark that sets the entire country aflame today. The '60s India only had a handful of migrant workers—they had arrived in metros like Bombay and Calcutta in trickles. The Tamils against whom Bal Thackeray launched his campaign had been in Maharashtra for more than two generations. Today, the country has up to a hundred million migrant workers. There are Telugus working in Maharashtra, Oriyas in Gujarat, Rajasthanis all over northern India and Uttar Pradeshis in Punjab and Haryana. There are Biharis in Kashmir and Kashmiris working in Himachal Pradesh.

The most numerous of all are the Biharis. Twenty-five years of caste wars followed by 15 years of Laloo rule has forced an entire generation of Biharis to look for jobs outside their state. Hence, 28 per cent of the adult male population of the state now works in projects and enterprises that stretch from Kashmir to Kanyakumari, from Goa to Arunachal Pradesh.

It is one of the miracles of Indian civilisation that all of them have been accepted peacefully by the host populations. But the opportunity they present to unscrupulous politicians for ephemeral political gain is too great to resist forever. And with the economic gap between the "progressive" and "backward" states growing, this resistance has been eroding. In the past two or three years, small parochial parties have begun to make noises about imposing disabilities upon outsiders with increasing frequency. The Thackerays may give them just the pretext that they have been looking for.

The other great change is in the reach of the media. Forty years ago an anti-Tamil riot in Bombay would be reported only in the print media. The reporting would be circumscribed by government 'D' notices and filtered by vigilant editors for inflammatory content. Most people would therefore only hear about it second or third hand, over a period of days. Today, the news is flashed in gory detail by two dozen TV channels in a dozen languages, within a matter of minutes. People get to see what is happening.

Lopsided development, and the mobilising power of the audio-visual media have therefore turned not just Maharashtra but the whole of India into a tinderbox. Advani deserves credit for having recognised this. But how does one explain the silence from the Congress camp? Aren't Sonia Gandhi and Manmohan Singh staunch defenders of secularism? And isn't racial bigotry a blood brother of religious bigotry? Two decades ago, Indira Gandhi would have boarded Air Force One for Mumbai, considering the gravity of the situation. But the Congress seems to have become a stranger to that kind of leadership today.