The Devil On The Shoulder

Reforms initiatives grind to a halt, the electoral lure of swadeshi takes over 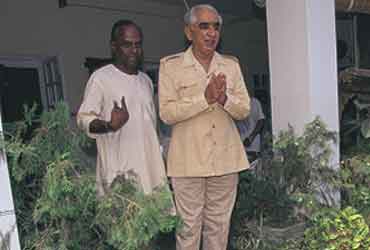 The decision to hike foreign direct investment (FDI) in civil aviation and telecom have been postponed with the cabinet divided on it. Obviously, that helps Indian owners. Strategic sales (or bulk sale to a single buyer at a premium price), which the disinvestment and telecom minister Arun Shourie once claimed as the only right way to privatise PSUs, is no longer on the NDA's radar. Shourie seems to have cowed down to his swadeshi opponents and decided to sell the government's stake in the open market to lakhs of investors. And, in sectors like power, there's a move to introduce the concept of fixed returns to promoters, which is clearly anti-reforms.

But ironically, not too many see shades of saffron in all these moves. "It's all about election politics and short-term," says a consultant who's involved with the disinvestment process. Adds Y.K. Modi, ficci president, "The issue is that at present no legislative action can be taken, nor can any ordinance be passed (because of the coming elections)." Says Swadeshi Jagaran Manch co-convenor S. Gurumurthy, the unbending helmsman of that school, "FDI is just one component of reforms.... Therefore, it is simplistic to say reforms have been blocked just because FDI levels are not being raised."